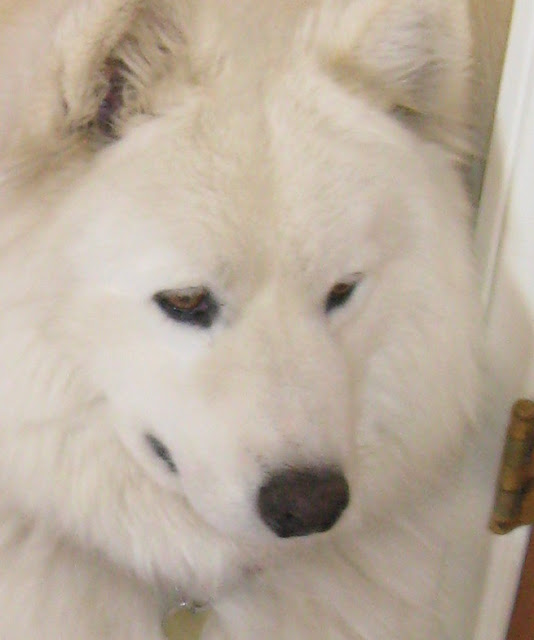 Samson passed away peacefully at the vet's office on Wednesday, while I was stroking his furry head and telling him what a very good dog he'd always been.

Lately, he had some difficulties getting up from my laminate floors, but was OK on the slate floor in the entrance where he slept and from other non-slippery surfaces.

But he was clearly old now. He only could walk short distances and would let me know when he'd had enough.

I took him to the vet to be evaluated, without any hope that the news would be good.  Dogs have a way of letting you know when they are tired and done.

The vet tech who took him out of the car, said, "he's tired," without knowing why I had brought him in.

And that's what Samson was. The long, hot, very hot summer did us all in, and Samson suffered the most, even with the portable air conditioner I bought for him. It was just a brutal summer.

The vet found a tumour on Samson's spine and also something wrong with his left hind leg. Not arthritis, something else, I was too upset to listen, but it wasn't good.

He was on the floor, I couldn't hold him, but I petted his furry head and told him he'd been the best dog I had ever known. I told him how much I loved him, tears just kept running quietly, I don't think he knew how upset I was.

It was over so fast. Then he was gone, my furry, fluffy, sweet Samson.

And I only stopped crying because I have to be together for Faith.

She sat by the gate in the dog run all afternoon yesterday, looking for him.

This morning, as I opened the dog door, she ran outside, looking, sniffing, and I have no idea how she felt when she found he wasn't there.

I threw balls for her this morning, I took her for a walk, Jasmine came and that was a great distraction.

Now she's sleeping peacefully by my side here.

Dogs don't stay down and sad for long. Such a good thing.

I will write a tribute for Samson, a memorial, when I feel better.

For now, he was the kindest, sweetest, calmest, most patient dog I've ever known . 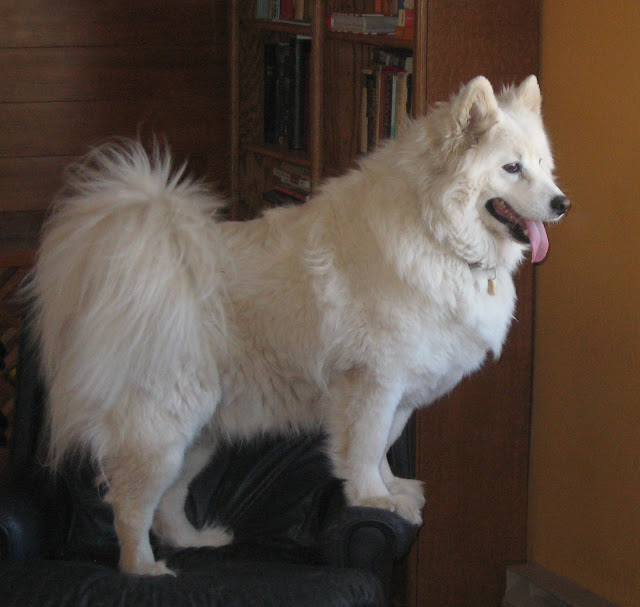 After our morning walk, Samson and I may end up checking on our juniper trees. There are two that I like to stop and check on, and, yes, talk to a little, as well. This is the large one that was so badly damaged in our last huge snowstorm, day after Christmas 2019.

Mark, who is no tree surgeon, did a pretty good job cutting back all the damage and making it look like a giant bonsai tree

Samson's taking a rest and I take his picture.

I think this picture tells the story of how old this tree must be.

While it's true photos add on pounds, shadow pictures really pack them on. I, who don't want to lose weight, lost 10 lbs since I last weighed myself. I never weigh myself, so the last time may have been years ago. The reason I did it now was that the lab where I was to have my CT scan asked, so I thought I better give them a true number.

I swear, I was born with long legs. In elementary school, the much shorter than I little boys would tease me mercilessly, calling me, The Nail, Daddy Longlegs, and -- you get the picture. 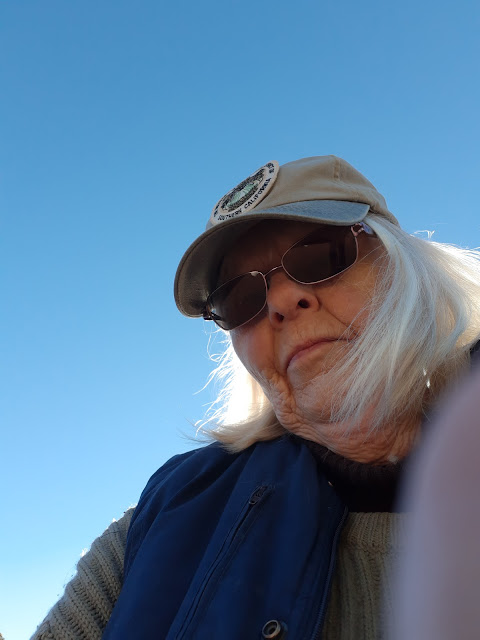 After the first four years at our neighborhood school, those who wanted to attend highschool could change schools. I couldn't wait and insisted I HAD to go to an all-girls school. I don't believe they exist any longer, but they did then, so I escaped my suburban tormentors and bullies for a lovely girls school in the city of  Stockholm.

by Sandra - Madsnapper & A Dear Friend