I've started walking for my health, not just strolling along while  Faith runs around, happily exploring, reading her newspaper, as I call it: Who was here last night? Who left that pile of ...?

I walked with Faith and all the rest of the dogs for years, and in Los Angeles for the last five years I worked, I took the bus to UCLA, just to get a walk in.

But then I got older and I've slowed down in the past five or so years.
Time to get serious again.
And perfect weather for it, cool, crisp and lots of sunshine. A little misty here, but it will clear.
Posted by Inger at 1:00 AM 13 comments:

Faith, who will be eight years old in April, has never been sick or injured in her entire life. She's never vomited, torn something while running full speed and ducking just in time to get under a barbed wire fence or playing in the mess under one of these junipers.

Until now, when she injured her cheek. I first noticed it after she scratched and bled the other day. So I treated the wound with antibiotic cream and dug out one of these cones, I had two. She definitely didn't like it, showed me she was really disturbed by it. 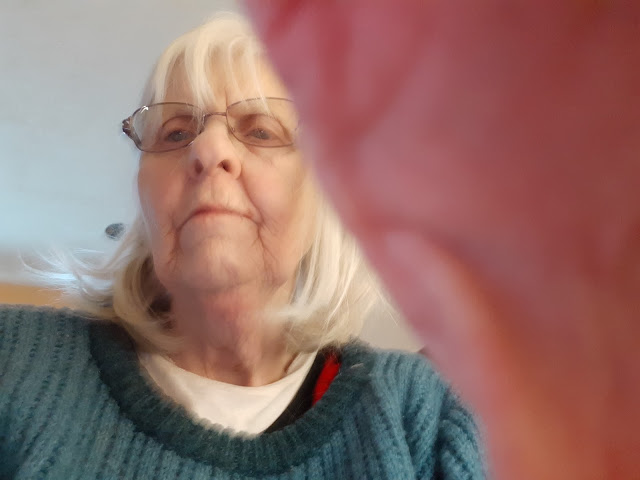 "Don't worry, mommy will fix it for you," I said, and petted the top of her head. Then I got the scissors and started cutting to trim it back.

Here is the final result. And what would we do without duct tape?

She can run around and go in and out of the dog door.

And she can chew on her balls and nyla bones, I think so anyway, after I show her that she can. We'll see. She's really miserable without them.

I like it when a color photo comes out almost in black/white with grays and a tiny bit of gold from the setting sun.

with Jasmine, my greatniece, who will be eighteen soon.

Though new to driving, Jasmine is a very good driver. I feel completely comfortable with her driving me, while I enjoy myself taking pictures and thinking about my blog.
Here we are in the Central Valley, as the San Joaquin Valley is now most often called. We're heading toward the mountains in the east.

When spring comes, something will be growing in these fields.

For now, it was lovely to see some green grass, weeds or whatever this is. Nothing green grows in the canyon right now.

Mist enhances a landscape, doesn't it?

While trucks do the opposite. This is what you encounter, driving up the mountain.

In 2016, there was an article in our local paper which noted that 40,000 trucks, like these, pass through the facility that checks them each month. And counting, it said. True, I see so many that just don't stop to be counted. Just want to keep on going and who can really blame them.

Even though I don't live close to the highway, you can't help but wonder what this does to your air.

Jasmine is handling the drive so well. I don't think I could have done that at almost 18.

A view of a mountain wilderness.

And the next, indicating that the first exit into our town is coming up.

And soon we will be home.

I'm so thankful for Jasmine's help.

In the pulmonary doctors' office in Bakersfield, I met with nurse practitioner Carrie to learn the results of the CT scan of my lungs. 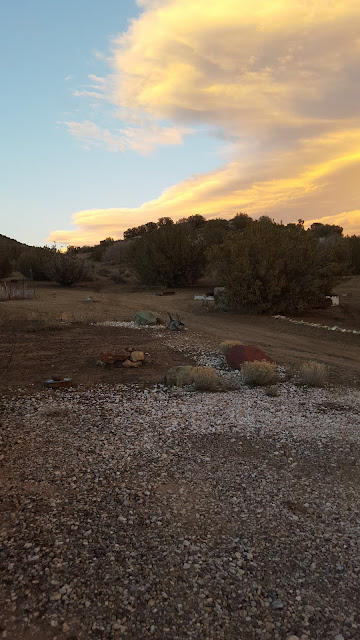 She confirmed what I already knew: asthma, emphysema, then added: a broken bone in your back, your spine. 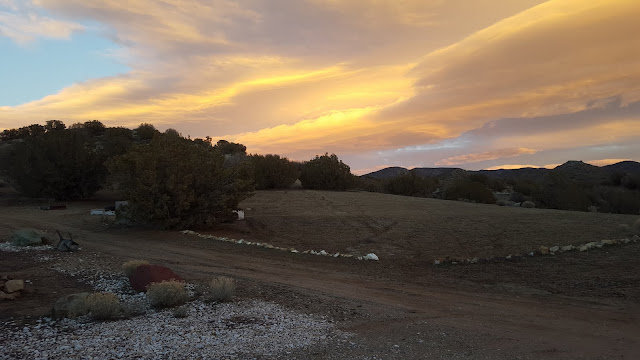 For the latter, she said I need to have a bone density test. I knew this too, but have tried to avoid it. I've had them before, years ago and they were on the fence of being bad and requiring medicine that I felt I couldn't tolerate. There may be more choices now, so I will have the test soon. 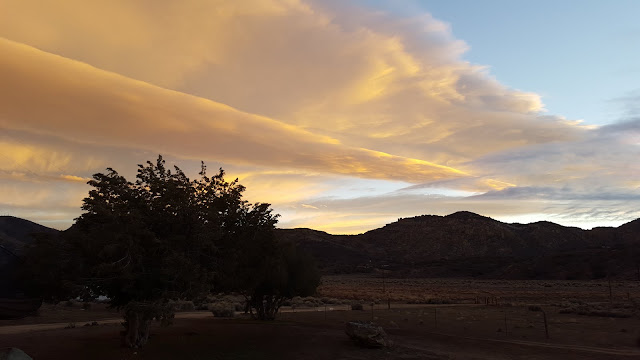 About my breathing, I asked if I have COPD. Carrie said, you are on the fence. 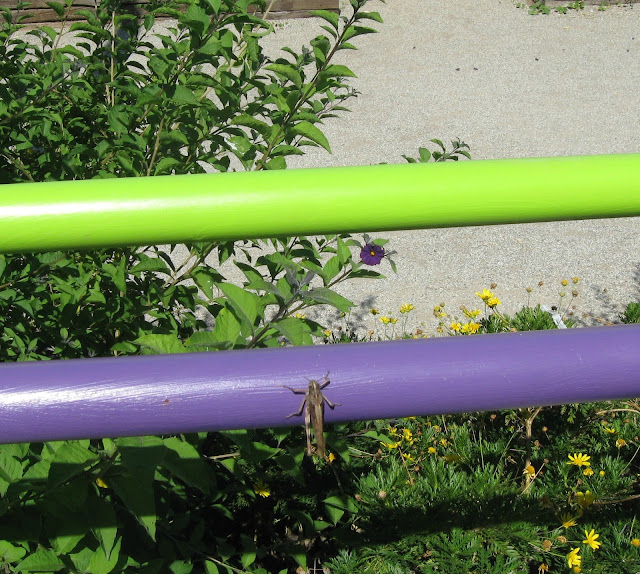 Like this critter, who's hanging on, but also could just fly away. Fly away would be good, but reality for me is better.
I told Carrie I haven't smoked for almost 30 years. That's good, she said, but you've been exposed to a lot of wild fire smoke.
So true, I wasn't careful when the fires were close several years ago. So much excitement. 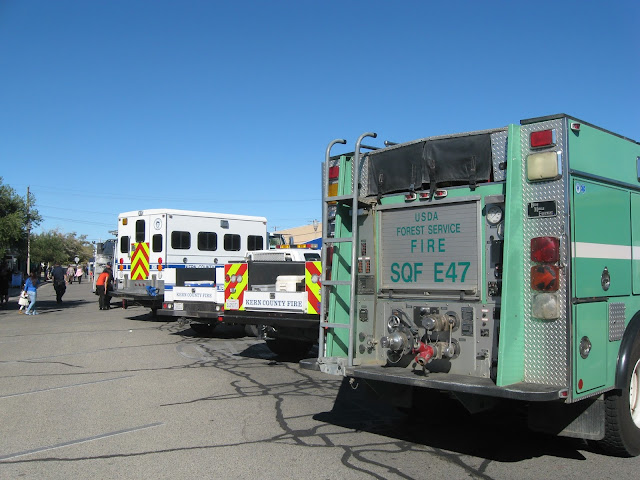 Firetrucks, sheriffs, helicopters and, of course, firemen too. Here I am at a safe event with no smoke and a lot of fire trucks. 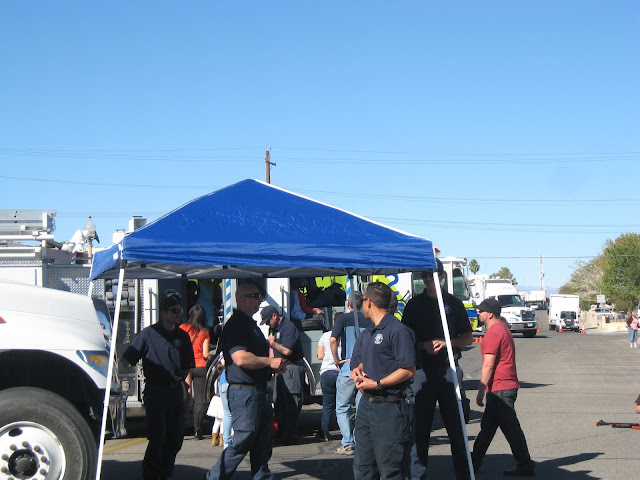 And firemen too.
But I digress. 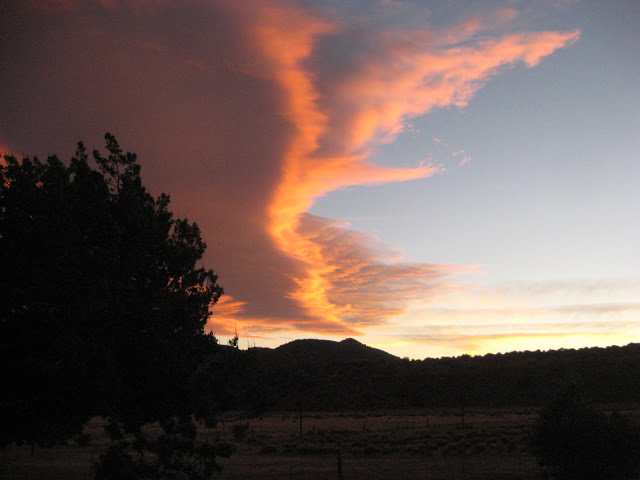 Back to nurse Carrie. I asked her what I can do the help myself right now? 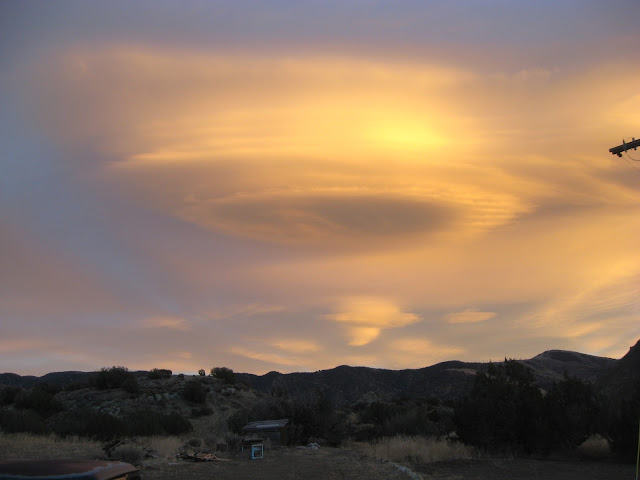 She said use the inhaler as directed, then she prescribed walks. She said walk as much as you can, build up your strength and walk.
What a positive recommendation, I thought. It made me feel really optimistic. I walk most days because I enjoy it, but I'm far from a strong distance walker these days. So I will work on it. 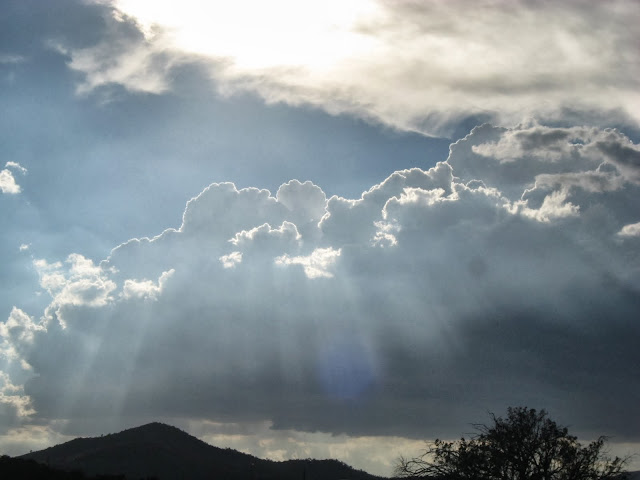 But this is the first thing nurse Carrie said:

Getting Ready For A New Puzzle

Much as I love candles, a puzzle requires better light.

This is the dining area in my house. I inherited the table from the mom of a friend of Errol's and mine. Nothing matches in my house, and it works for me.
When we first moved here, we actually went to a furniture store and bought a new living room set and a new master bedroom set. The master bedroom is still intact, but all the dogs that lived here pretty much did away with the matching recliner and love seat we had in the living room. That love seat was perfect for so many of them to sleep on. Or stand on to look out the window. Or have accidents on, as not all found street dogs were potty trained and it would take awhile to train them.

I really don't like the sorting part and I've seen on the blogs how people, much more advanced than I in the art of solving jigsaw puzzles, organize the pieces. Much larger piles of pieces.

I have my own method and I suspect I sort the pieces more finely, more piles, than than those more advanced than I.

As I began this puzzle though, I noticed something:

I'm getting better at this!

Isn't this a lovely family picture? The kids are eating, mom is resting and dad is watching over everyone.
I just had to stop for awhile and take their picture before I drove home on our muddy road. 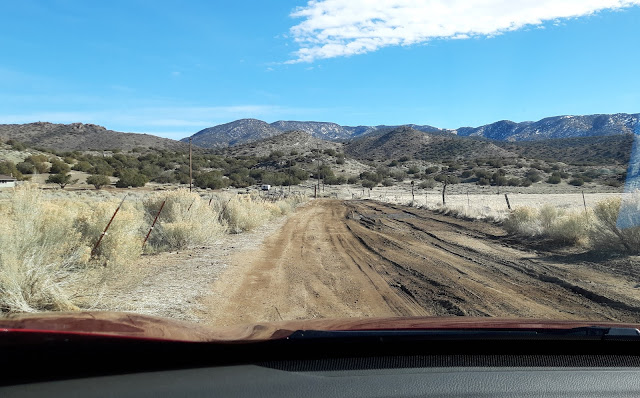 I don't drive in the mud if I can avoid it. I find it much more difficult than driving in snow. So I drive on the side, as you can see it's not as bad there. And I can't help but wonder who drives in the mud? Why is the mud full of tire tracks?
For some reason, it gets really difficult by my gate this year. And there I have no choice, I must drive through the mud, with two solid wood gate posts on either side, just waiting to get hit.
I haven't had a problem for a long time because I emptied bags of pebbles there some years ago. I guess they've by now been absorbed in the mud.
With the Jeep this would not be a problem, but with my new car, a bit of a worry.
Sure enough, even at about 5 mph, the rear end started to slide. My policy with skids is to do as little as possible and in my long life of driving this has worked well for me. I did so again, plus whatever you are supposed to do, that thing no one can teach you because you just have to know it, feel it.
Then my neighbor, Charles, who has a machine for such things, came and smoothed out the road for me. He did the entire road, which still has puddles and mud in it, but other than that is in better shape now.
Posted by Inger at 1:00 AM 20 comments: I finished this puzzle over the holidays. Still only 300 pieces.

I started a new one, also 300 pieces, but instead of cute dogs, it has about a gazillion kitties wreaking havoc in somebody's kitchen.

After that, I know I want to do one with a different motif. A city scape, perhaps. Or a painting. Those are mostly 1000 pieces. Too much for me right now.

I have a couple with 550 pieces. After I finish this next one, I may try one.

And work my way up to a city view puzzle. They even have a Stockholm puzzle on Amazon. I only found one and it depicts one of the smaller islands on which the city is built, called Riddarholmen. A church by the same name is located on this island.

Maybe when I get better at puzzles, I will do it. 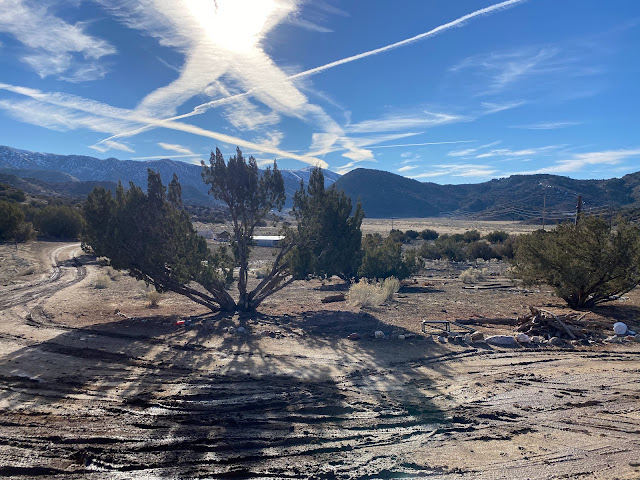 My neighbor, Joyce, sent me this new year's greeting. I thought it was a great picture, so I asked if I could post it here.

When I was out walking, I saw that cross in the sky that's sort of fading away here.

Joyce has a large veranda with a great view of the mountains, same mountains as my view, but she's higher up, so her view is broader and just fabulous.

So Happy New Year, from Joyce and me!