Visiting Rachael And The Critters That Live With Her

Only three animals remain from our donkey rescue days (from the ones Rachael rescued from the rescue ~ yes, it sounds weird, but some rescues are not all they are made out to be): 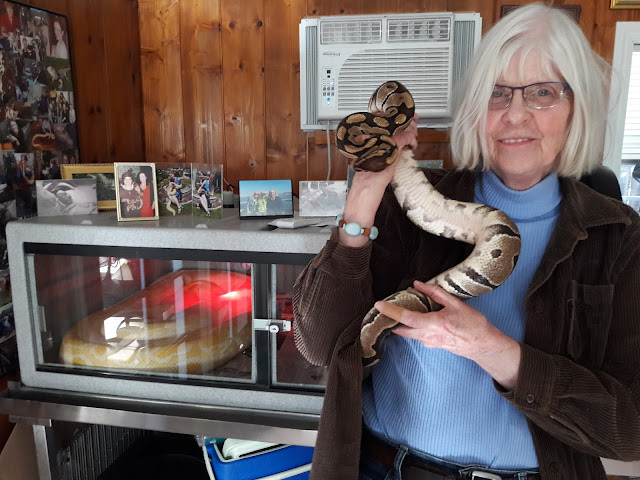 First: Since he was hibernating under Rachael's bed, I didn't get to see Gulliver, the California Desert tortoise. But here I am with Cleopatra, the Ball python, named after the Egyptian queen who, it was said, liked to wear them around her wrists. Smaller versions, I imagine. This Cleopatra has grown so much since I last saw her and would not fit a wrist. 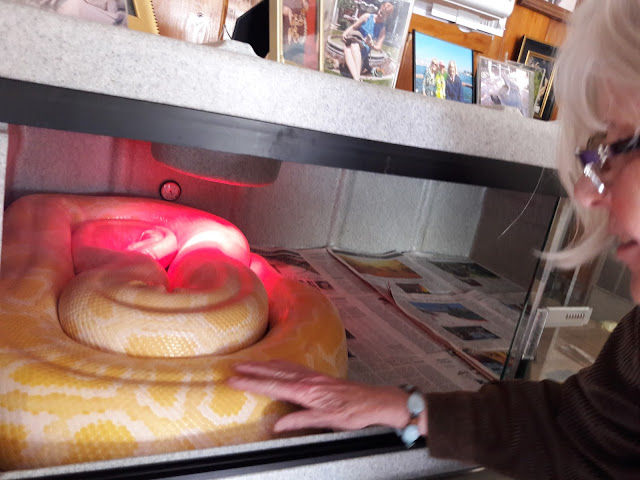 Then: Sahara, the Albino Burmese python, who first was a pet snake in Beverly Hills, owned by a woman who, when Sahara became too large to handle, needed to get rid of her. 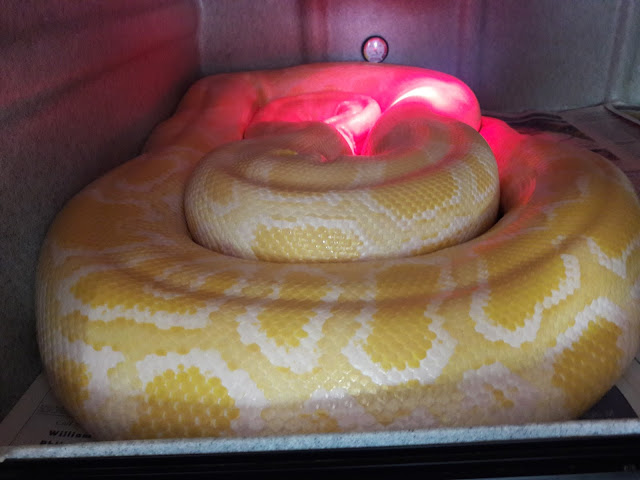 She was nine feet when she arrived at the rescue. Now, some ten years later, she must be approaching twenty feet. See how massive she is. 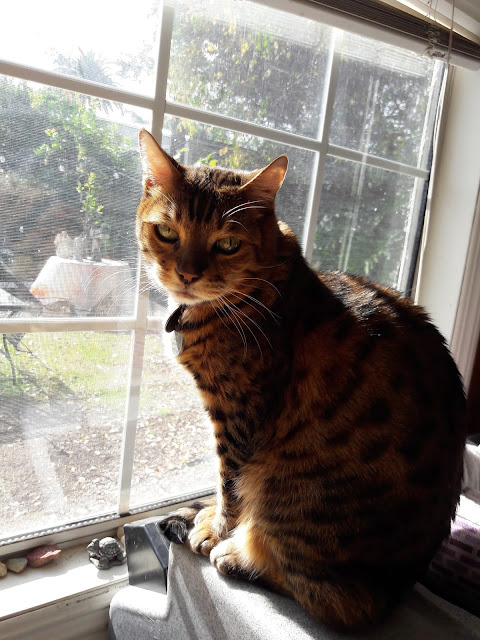 I met Rachael's Bengal cat, Kitty Zeus, for the first time. Isn't he absolutely gorgeous? Rachael's other cat, Artemis, born to a feral mother, I only caught a glimpse of before she joined Gulliver under the bed. My neighbor, Joyce, has two feral kittens also and they are just as shy. 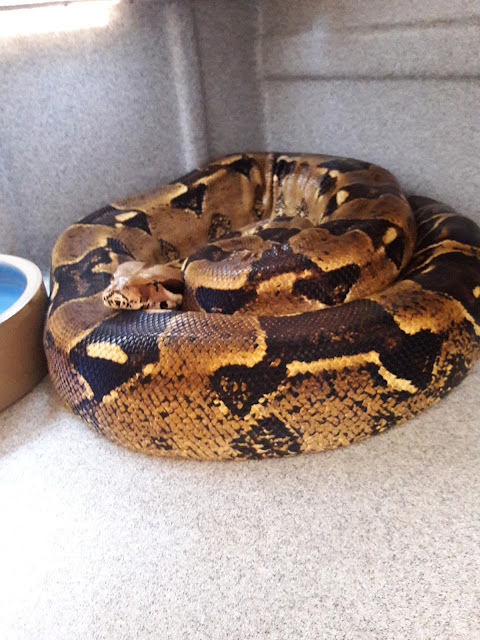 I think this South American Red-tailed boa is truly beautiful. And I don't think you need to like snakes, as I do, to find her so. Her name is Nightingale and, since it's winter, she is in the twilight zone, not complete hibernation, but so cold to the touch. All the snakes were, and it felt strange to touch them. 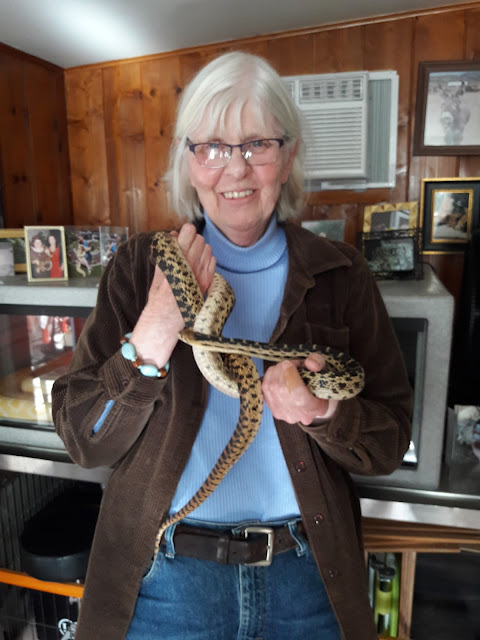 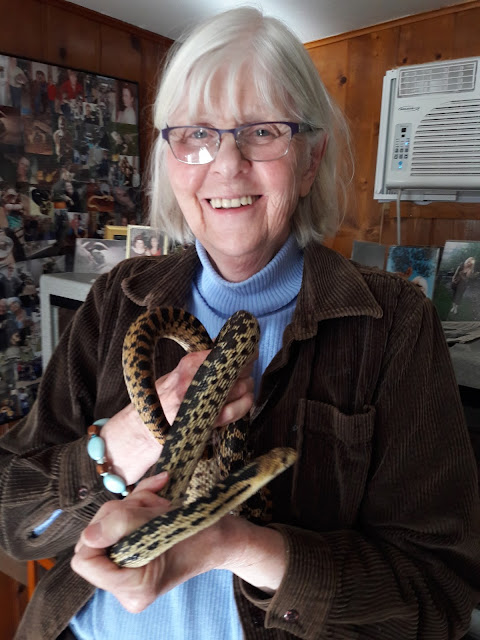 Tenzing, the Gopher snake, was the most awake of the four snakes, squirming and wiggling, but still so cold. I find reptiles absolutely fascinating. 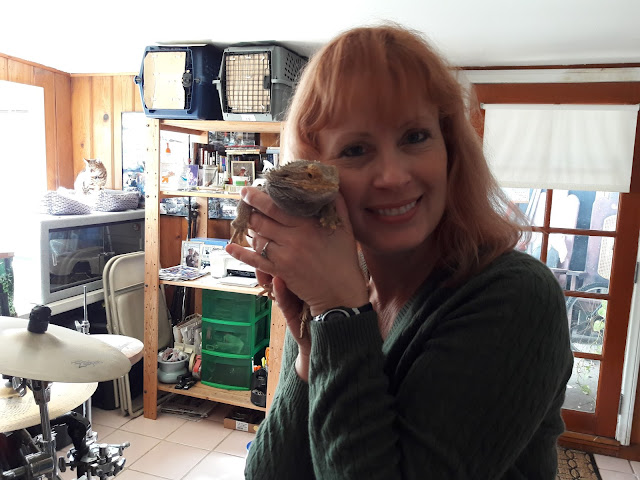 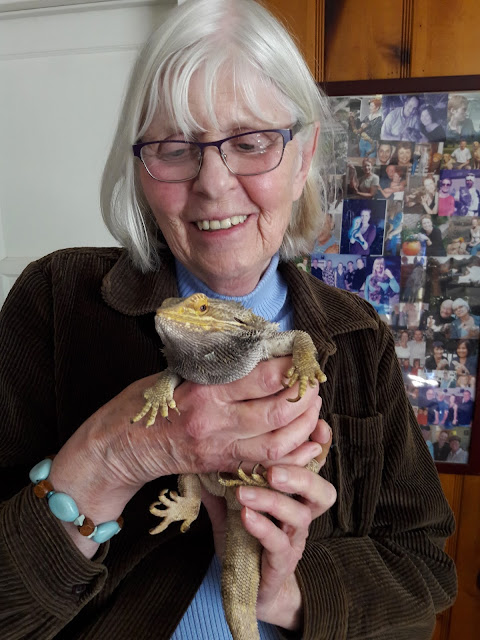 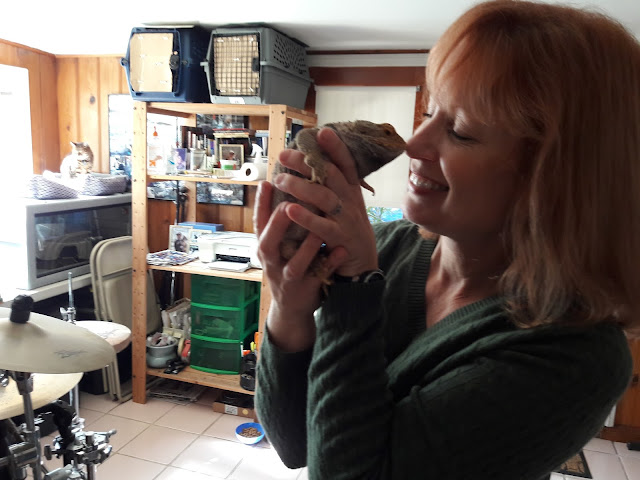 When we worked at the rescue, Rachael took in two Bearded Dragons, Adelaide and our beloved Sydney. Adelaide died several years ago, but Sydney lived to a very, very old age. And both Rachael and I were so in love with him. Native to Australia, Bearded Dragon lizards are named after the black "beard" they display when scared or angry. The guy pictured above is named Lord Soper and he looks a little annoyed when I'm holding him.

I had completely forgotten who Lord Soper was, but Rachael reminded me, and then I remembered listening to him at Speakers' Corner in Hyde Park several times. I'm sure he was one of the people who influenced my life, my political views, such as the need for your country to care for those who cannot care for themselves, and so much more.

Remembering names is one of my old age issues, together with an inability to open cans, a need to grab on to something to get up from various places, and so on....... 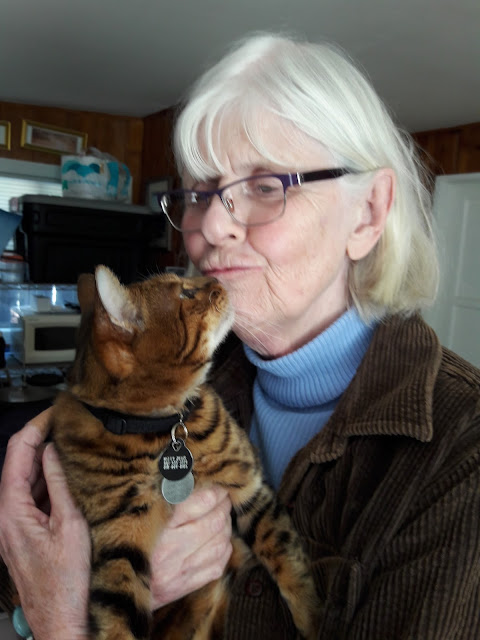 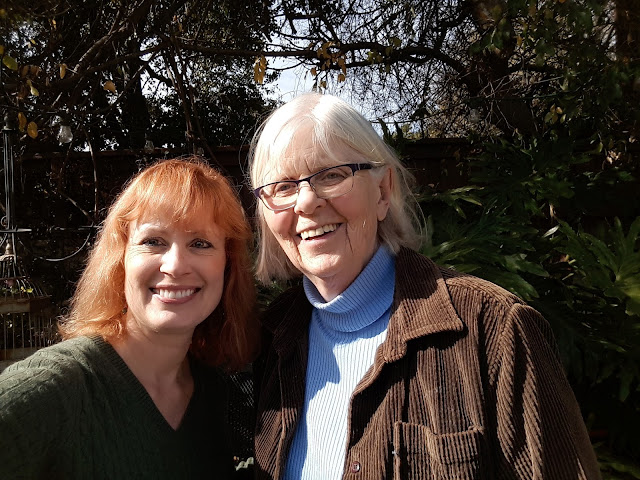 Bad as working at the rescue ended up being, you will find good things in most places: I met Rachael there. She's such a bright and kind person in my life and means the world to me. Of course, I met donkeys there and I fell hard for these, so often maligned, animals. I also discovered the music of Willie Nelson. And then there was Sydney, the Bearded Dragon - who'd think one could love an old scaly critter so much?

On a final note, you may have noticed that Rachael names her critters after notable persons, Greek gods, goddesses, and so on. Rachael is an animal educator, who has taught both kids and adults what it means to bring an animal into your life. So when a kid asks, "who was  Tenzing," Rachael can continue the teaching along that thread. Same with me, when I asked who's Lord Soper, she reminded me, and London of my youth came back in all its fog, grime, and glory.