When I said I needed a break from blogging, I had no idea it would last for such a long time. More about that at the end of this post.

Samson Says: OK, so I went to the groomers and now I have to pose the clean version of me! I will put up with it, again....

Me: Thank you my sweet boy, you were such a good dog at the groomers.

Samson: I know, I just wish they didn't put that smell-good stuff all over me. I don't even smell like the big, strong dog that I am. 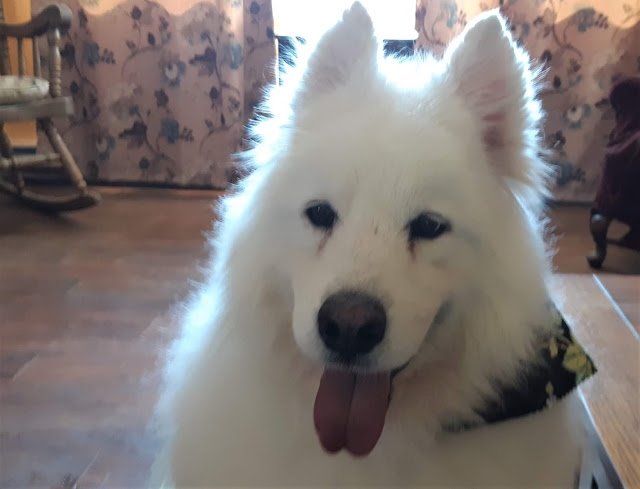 But I'll give you my Sammie smile anyway. Then please take this flowery bandanna off of me. Makes me look like a girl! 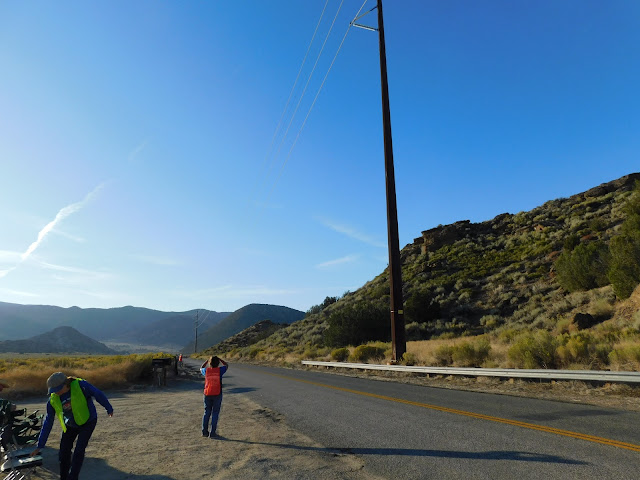 This year, the GranFondo cyclists who signed up for the 100 mile race came through a part of the canyon. This was early in the race and the turnaround was set at the end of our road. Joyce and Bob participated in traffic control, Rita and Cindy directed the cyclists to the turnaround, and I, who didn't volunteer this year, rang a cowbell, cheered them on and took some pictures. 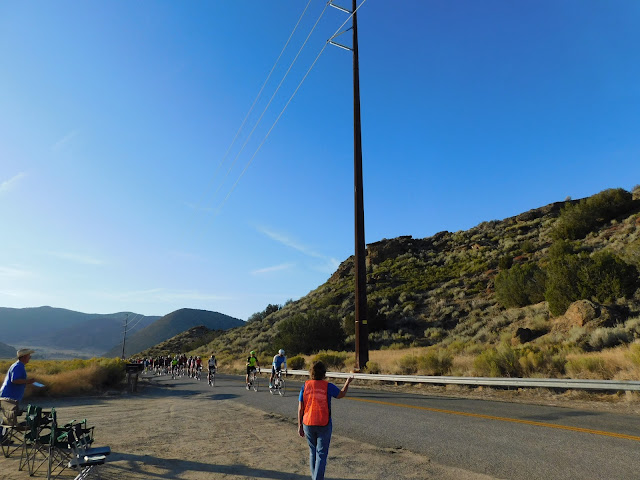 It was a beautiful morning as we waited. Here are the first cyclists to arrive at the turnaround. 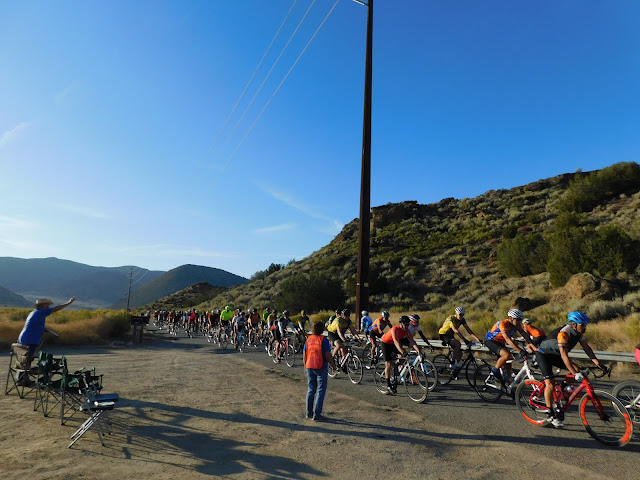 And here is the crowd. Good thing they didn't run into each other as they turned. 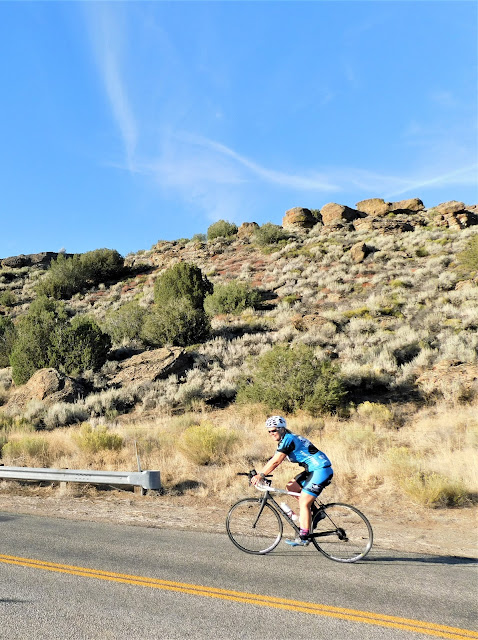 Here is my friend, Kathy, who came to the turnaround in the middle of the 100-milers. She yelled at me, and I yelled back, while frantically waving the cowbell around and trying to take pictures of her - all at the same time. So glad I got something as that kind of multi-tasking gets a bit more difficult with age. 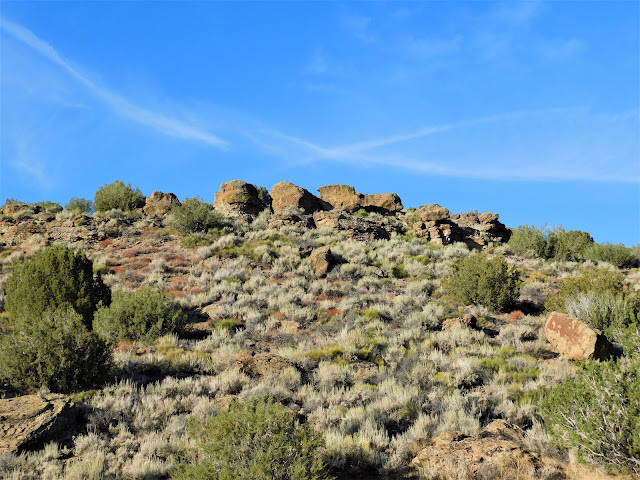 After it was over, I took a few pictures of the rock formations on top of the hills across the road. 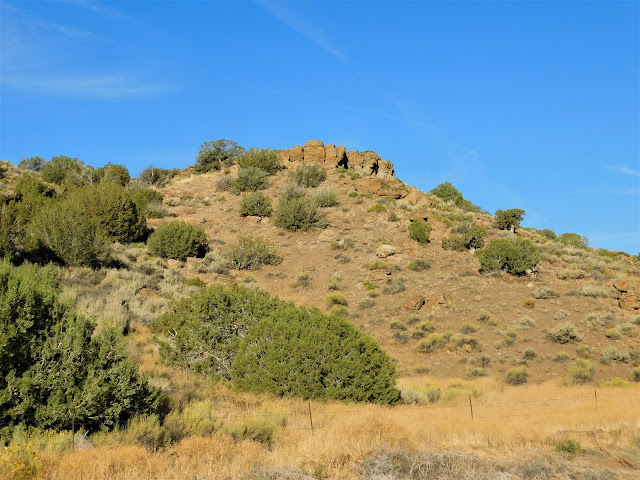 They are the view from my living room window. 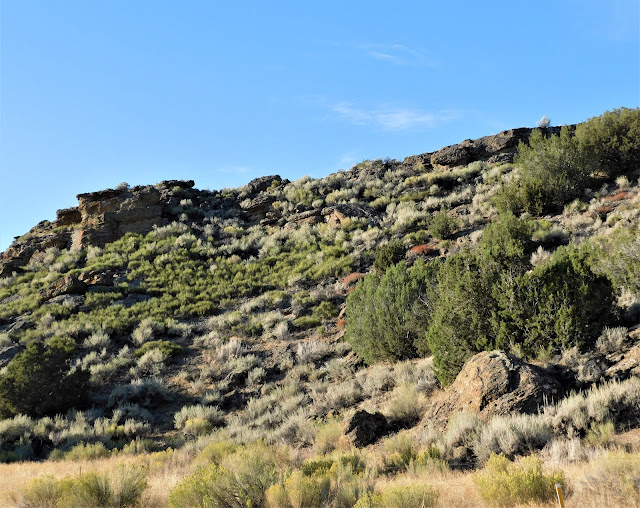 And I'm very fond of them.

One day, I opened the glove compartment in the Jeep and found this pile of insulation with a mouse, blinking surprised at my intrusion, sitting on top of it. This one disappeared, but I also had mice in my bathroom cabinet drawers. Same thing there, I opened a drawer that I don't often open and there were two of them. Phew! My neighbor, Bob, set the traps and we got rid of them. This got me on a cleaning frenzy. Everything is clean now and most of the junk that accumulates over the years is gone. Glenn came and fixed an entrance they had gnawed on the outside of the house. Hopefully, that will keep them out for a while. 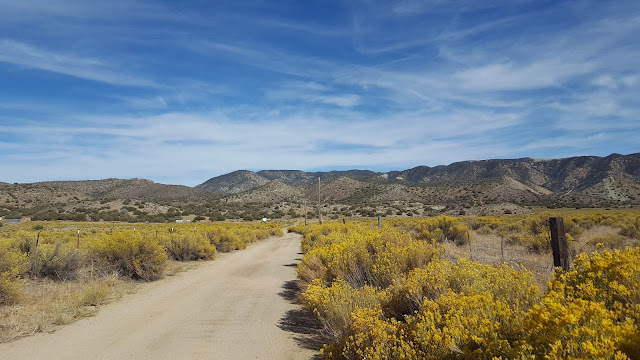 It's that time of the year again. The rabbit brush weed makes up for being a nuisance for the rest of year. Our part of the canyon is covered in yellow blooms right now. It makes me happy because I know our long hot summer is over. It's supposed to be 32 degrees F tomorrow morning. Can't wait!

Can you see him? The cows came by the other day and the Guernsey bull took a nap under my tree. 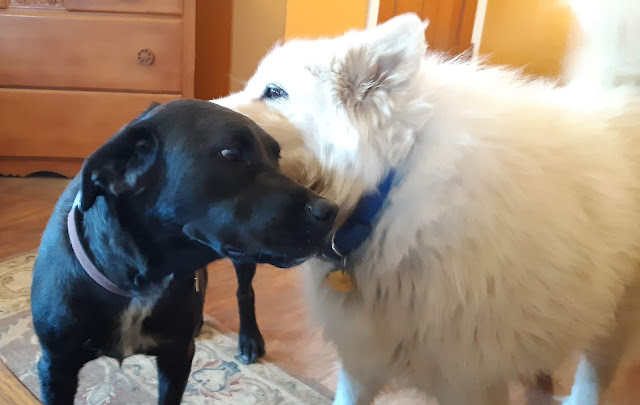 Samson and Faith are both doing well. They are now ten and five years old. Next week, Samson goes to the vet for a wellness visit. Which means he's been healthy and not seen by the vet for a year! This must be a record for him, he's doing so well, and is such a happy, sweet and kind dog.

I'm doing well also. I've had a few medical issues, but nothing serious other than my diabetes, which is driving me nuts.

I'm not blogging because I have things I really, really need to get done here at home. I thought it would go faster. It's taking forever or so it seems. It will probably get better now as the weather cools down. My house is less than 1100 square feet, but I feel such a need to downsize. Which I can't do as long as I have the dogs. So I'm continuing to work on downsizing my possessions instead.

I smile when I think about the young woman who arrived in New York City in 1962 with two suitcases. Off-white they were, one large, one small.

I will update again in October. I am working on a very fun and important project that I hope I can tell you about then.

And I hope to be back to blogging again after the holidays, in the New Year.