Torrential Rain and A Mini-Flashflood


(if there's such a thing) finally inspired me enough to take some pictures. Once I got the camera out, I just continued. 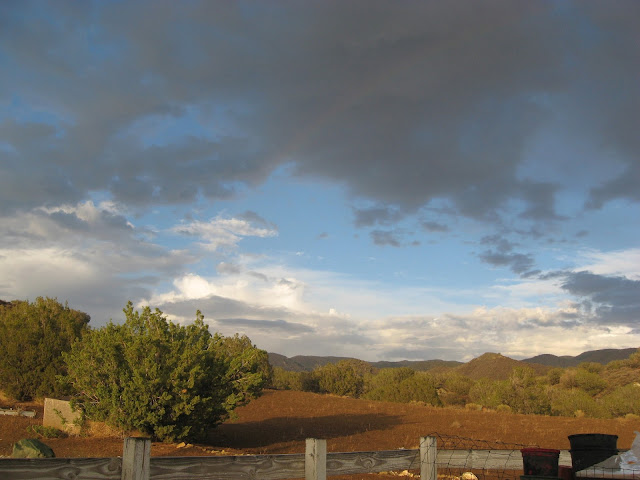 The much needed rain washed my road out some, but not as bad as it could have done. As dry as it is here, seeing the force of that water was amazing. 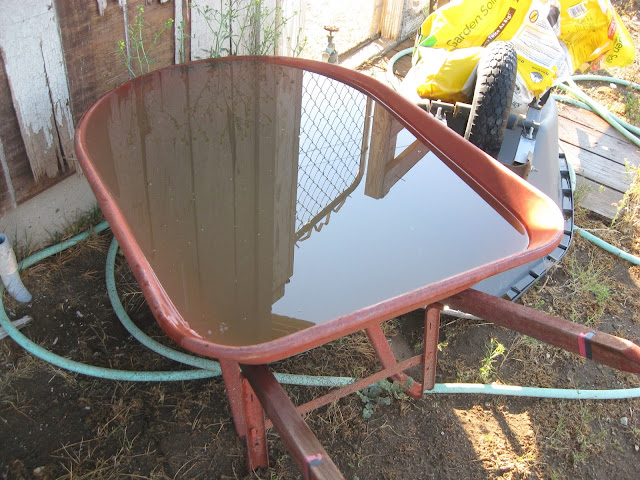 It filled up my wheelbarrow in just a few minutes. I know this is not as bad as in other parts of the country, but as dry as it has been here for so long, Mother Nature put on quite a show. 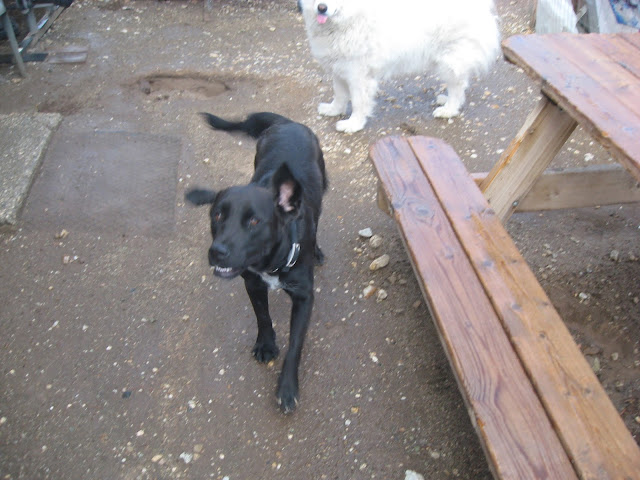 I haven't posted anything for a long while now because losing Errol has been the most difficult thing I have ever had to live through. The way it happened has been most difficult for me. I have guilt about many things I know shouldn't have. I know none of what happened was my fault, I know I did the best I could, I know you cannot make another person do what they don't want to do, like seeing a doctor sooner rather than later. Still, I have questioned myself and my actions. 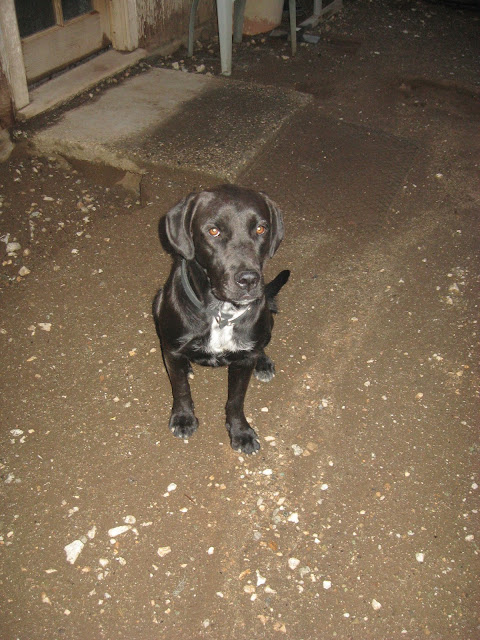 I have also had to fight to let my anger with hospital infections go. I worked at UCLA for over 30 years and being angry with the place would not do me any good. I feel the infection was an accident, but I feel they discharged him too soon back in early February. The kindness of the nurses and doctors at the liver transplant ICU, where he spent his last months, helped me let go of my anger. They were truly wonderful there. But still, he beat HepC, he beat cancer, he got a new liver, he fought so hard, and it wasn't enough. 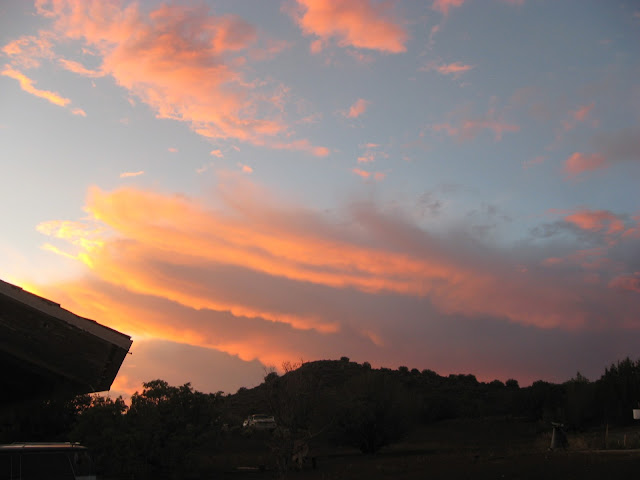 Just wanted to let you know what I have been feeling. It's all getting much better now and I'm beginning to just miss him. The other morning, hanging laundry on the line, I saw him doing it, as he so often did, and started to cry. I said, "please hold me," and as I looked up through my tears, a small feather danced in on the wind and fell to my feet. I picked it up, as if it were a message, and I have felt much better ever since. 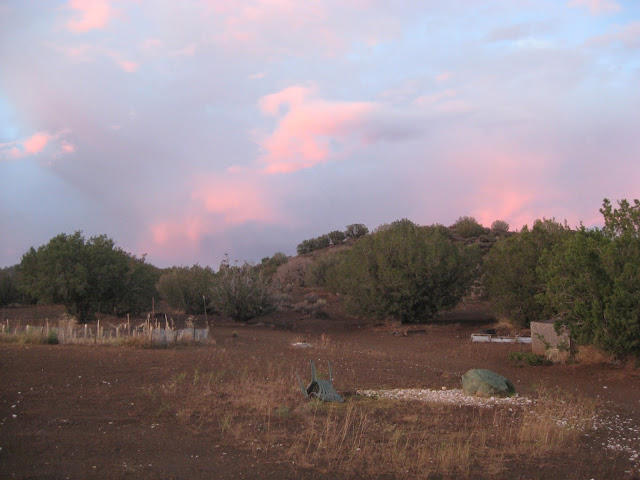 I have also been really sick with a horrible chest cold, a temp of 103.2 and coughing, coughing and coughing some more. I'm much better now, but still coughing. It's so very tiring and, at my age, you just don't come back as fast. 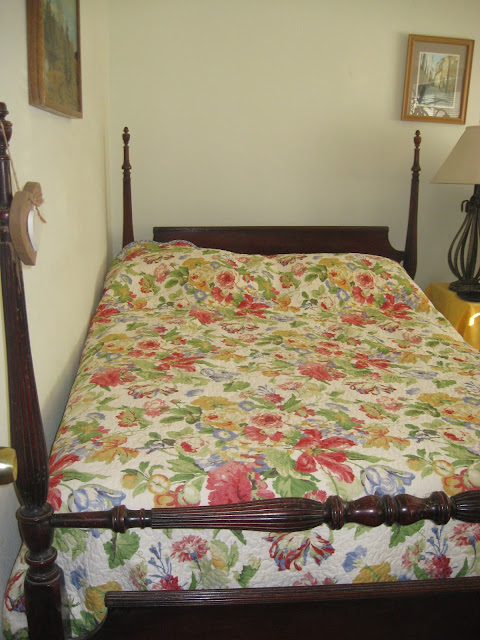 And now some domestic updates. I have permanently moved into the guest bedroom/office. My friend Lin gave me this antique bed when she moved into a retirement home. I'm working on creating moments of joy for myself and this bedspread from The Country Door is something I bought with that in mind. JOY, lucky me, I find such joy in little things. 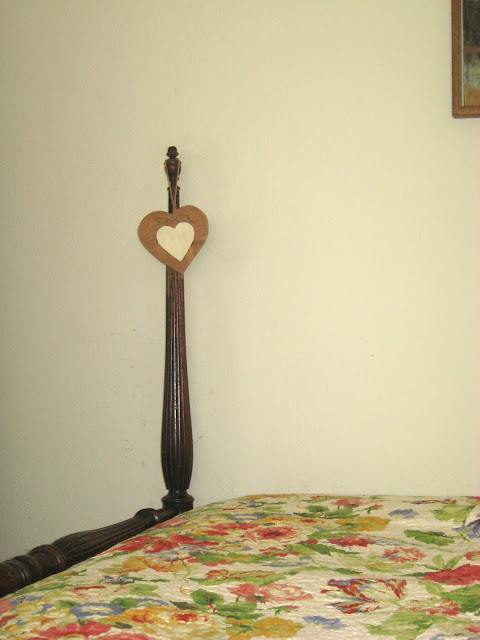 My blogger friend Bobbi and her dog Gracie (Samson's love) sent this heart. It was difficult to hang on the wall, but I found the perfect place for it on this post. Much scratched up post by Lin's beloved cats, Siam and Metoo, long gone now, but not forgotten. Not by me, I look at the scratches and smile. 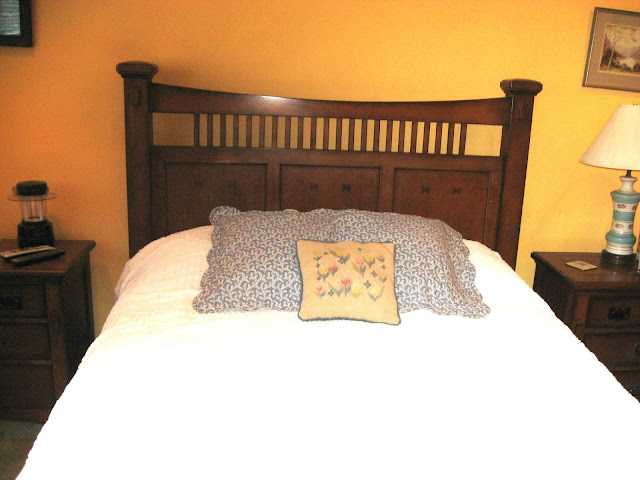 I'm making the master bedroom into a guest bedroom. I washed my Martha Washington bedspread and put it on the bed with some pillows. (This picture is for my friend Carol, so she can see what I'm doing on the domestic front.) My cousin's son and his girlfriend are coming from Sweden in a couple of weeks to spend a few days here with me before going to Palm Springs for a family event. 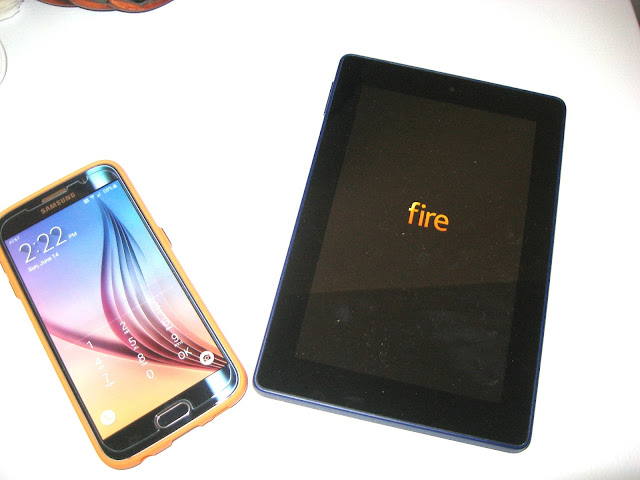 You may recall I said I didn't want a smart phone. When I called to cancel Errol's phone, the ATT guy was so nice, so sympathetic about my loss, that I let him talk me into one. (One can only wish they would be that sympathetic at Social Security, but no, that woman was really awful. I have a phone appointment with them on June 23rd, not looking forward to it.)  I'm not crazy about the smartphone. I've turned off all the pings that notify you of emails, and other stuff. I just kept the ringtone for an actual phone call. The phone is not working well for me. I need a small one to keep in my pocket, this one fits, but I can't bend over and work with it in there. So if I fall, the phone may not be within easy reach and that bothers me. But I will keep it since it's the thing of the future.  But then Amazon had a sale on the Kindle Fire, $99.00, so I bought one. And I love it! Right now, I'm reading books and also watching The Roosevelts, a series I missed on PBS. So much fun! 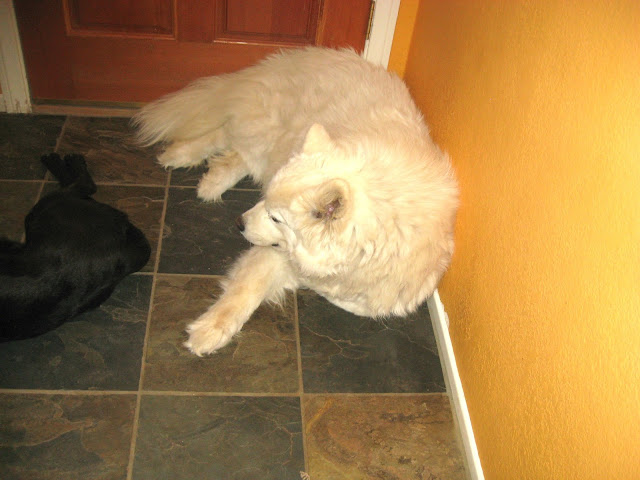 I thought you might want to see Samson, so I went to take his picture and woke him up. He was not pleased. Problem with him, right now, is that he didn't shed his undercoat. The vet said this may happen as they get older. I have raked and raked, but gave up yesterday and started cutting. So I will cut this week. Rachael is coming up for my birthday (I will be 75 Sunday, which seems unbelievable to me, of course), and since my own hair seems to have stopped growing, I suspect from stress, I will ask her to help with Samson instead. A neighbor gave me an airconditioner, it doesn't fit my current windows, but I'm getting new windows put in soon, so that should help Samson a lot. Poor boy, I feel so bad for him in the heat. 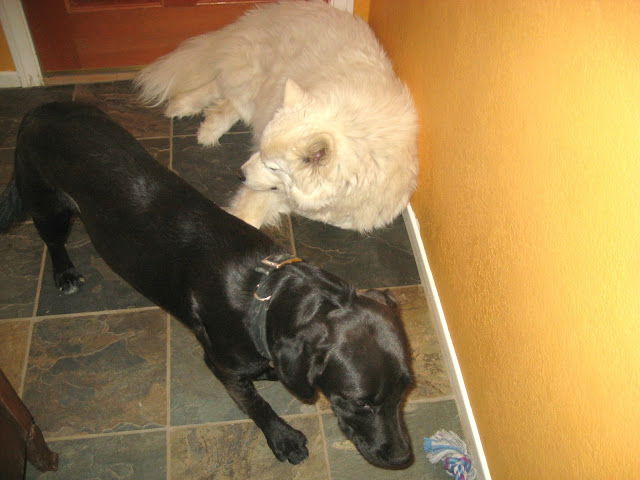 And then little Miss Have To Be Number One woke up and jumped up to make sure she would be in the foreground of the picture.

And that's how it is, here in the canyon. One day at a time, one foot in front of other foot, creating little joyous moments for myself and the dogs. 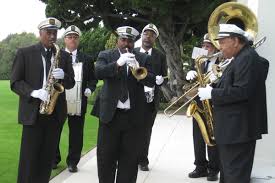 And finally, finally, hiring the New Orleans Traditional Jazz Band to play at Errol's funeral was truly the best! They helped to make it a celebration of his life. And they helped me feel the joy of the 30 years I spent with Errol.