Sightings From My Summer Bedroom

The other day, I saw a raven chase a road runner across my back yard. The road runner ran across the open space with the raven flying right above her, almost touching her back. When she reached the juniper trees, she just went under one and there wasn't much the raven could do, so the chase ended with a draw and no one hurt. 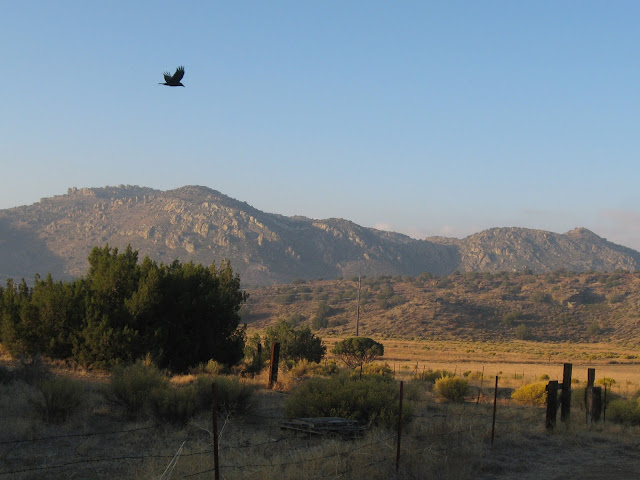 The ravens are very territorial and chase away other large birds, like hawks, from the land they have claimed as theirs. I didn't know one of them would take on a road runner.
A mule deer buck comes by almost every day. When I slept in my other bedroom, I had no idea that deer would come by here so often. Now I see several every week. The buck may be the same, but I've also seen a group of them.
So I had to google what a group of deer is called. This is what I learned:
Most people, upon seeing a bunch of deer together, would call it a herd; however, you also could call the group a bunch, a mob, a parcel or a rangale. Never heard that word - rangale - before.
There's always something new to learn. At my age, all you can do is hope you will remember it!
Posted by Inger at 1:00 AM