Notes From the Canyon 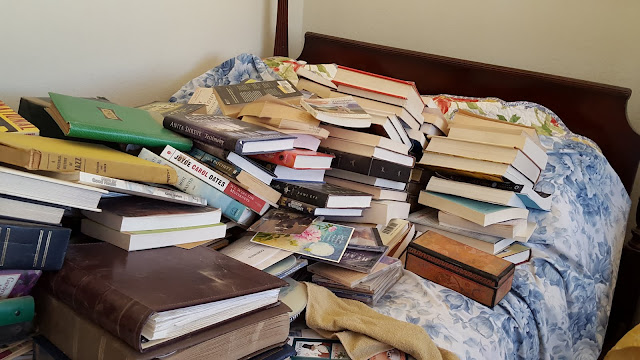 The above mess is just one of the reasons I haven't been by to see you or posted something of my own. Renovations here are progressing: new windows were installed on the first, Glenn put up new siding on the south side, repaired the eaves, and scraped the west side of the house. Next week, he will put up siding on the east side. The north and west sides are in good condition and can just be painted. 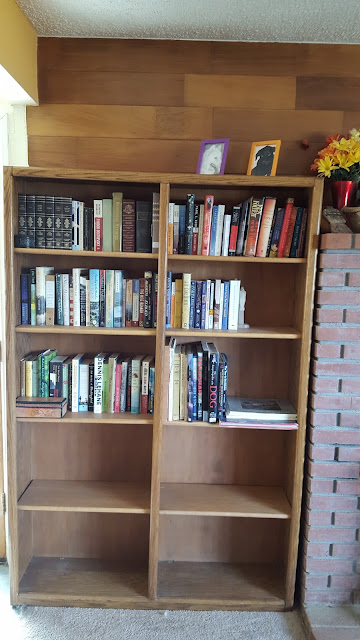 We moved the bookcase back to where it was years ago and this is what's left of the mess after I dusted (and dusted and dusted) and purged the books. More will be added after I go through my other bookcases. I'm leaving the bottom shelves vacant for now even though Faith shows no interest in books, just in material things, like afghans, pillows, and such. My blogger friend Dreaming drew the pictures of Faith and Samson that I placed on top. They are absolutely fabulous. She sent them to Errol and me when he was in ICU. One 'Get Well,' one 'Thinking of You' card. One of the many thoughtful things I received from you guys. 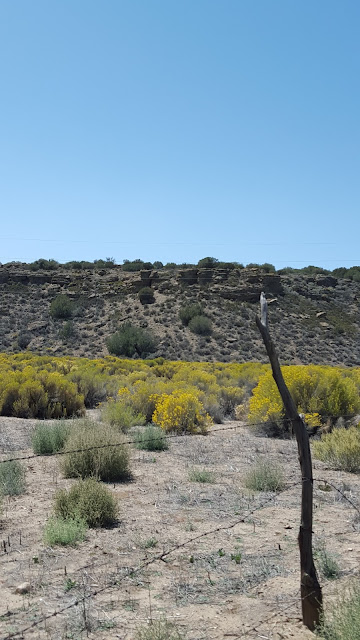 In the past two weeks, five or six followers have decided to leave my blog. I hope these are people who never came by and decided to just clean out their followers in order to not have too many blogs to follow. I do that myself a few times a year, or used to when I had time for such things. 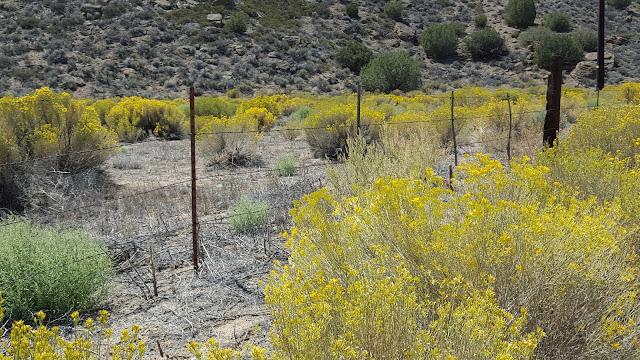 The rabbit brush bushes are in bloom, early this year. Apples are early too, I read in the paper. Tehachapi has several large apple orchards, but Glenn has the best ever apple tree. When I asked him to bring me some apples, he told me that the ground squirrels had gotten them all. 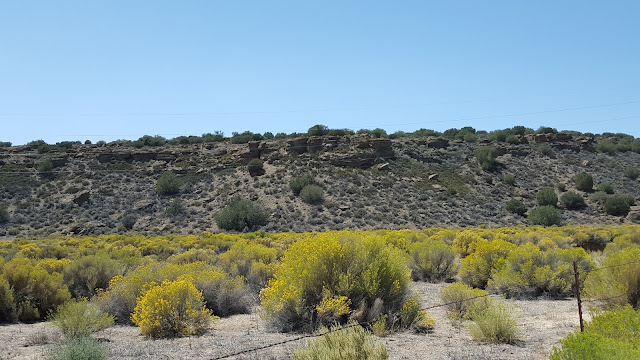 I'm not happy with the colors of these pictures, taken with my phone. Sometimes pictures from my phone are just gorgeous, other times they are really bad. There are settings on the phone camera, but I haven't taken the time, so I guess I can't complain. I also see that Windows 10 will force me to organize my pictures or do something. I don't like the way they have it set up. And I also miss pictures. They are there on the large Windows 10 display, but I can't find them when I want to download them to my blog. 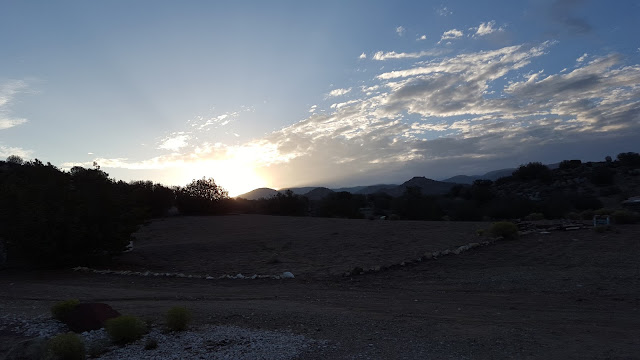 I'm so glad September is finally here with cooler weather, particularly at night. Tomorrow, September 6, I have lived up here for nine years. I remember it so well, driving up here with one cat, one bird, and two dogs in the car.  Errol following with Bandit, our third dog.  I kept a journal where I noted my impressions of nature and the animals that came by. It's different now, the drought, more people, and as one of my friends here said, more dogs. 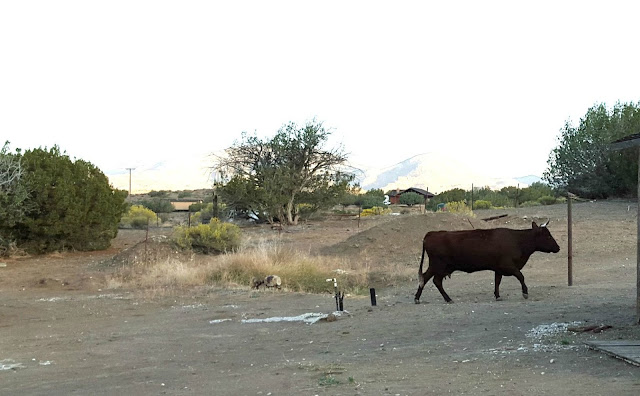 I must still be a city girl though, because I get so surprised when find one of these in my backyard. She was here this morning, and after she realized all my green food was gone, I didn't have to do too much to persuade her to go back home. 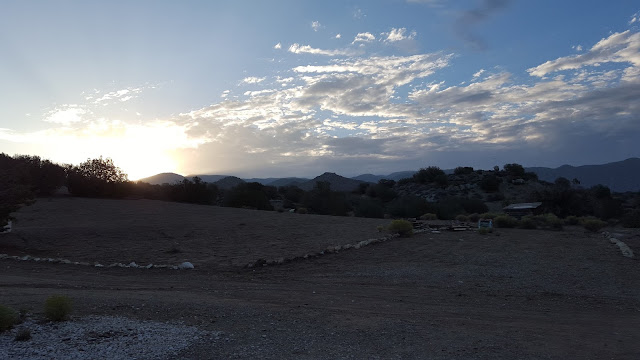 When I see a beautiful sunrise like this, I know I don't have to go anywhere to find my joy. All I want for now is to be done with all this extra work I have had to take care of after Errol died. Most of it is done, DMV, Social Security, notifications, etc. and I will pick up the completed Living Trust next week. A few more big issues to deal with, then I should be done.  I take the Jeep in for major repairs next week. Then a lot of doctors' appointments that I have done my best to ignore for too long. Then, maybe I can just be..... 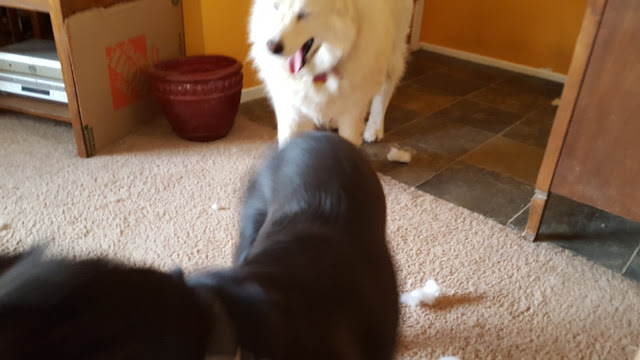 What is this mess? Did I bring you up to mess up the house like this? You deserve a spanking and I will tell mommy. 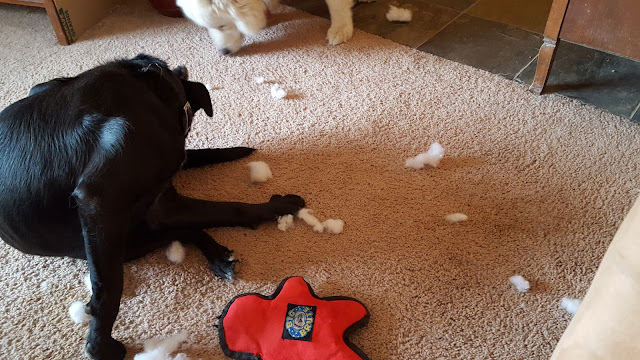 Faith: But Samson, this is a Brute! Supposed to be indestructible! I can't help I have such big teeth and strong jaws, can I now?  Mommy thinks I'm part pit bull, after all. And mommy already knows, she took the silly squeaker thingy out so I wouldn't choke. Little does she know about all the rocks I swallowed when I was but a tiny pup!