The other evening, the UPS truck came slipping and sliding up our muddy road and delivered this: My three-month insulin pump supplies. 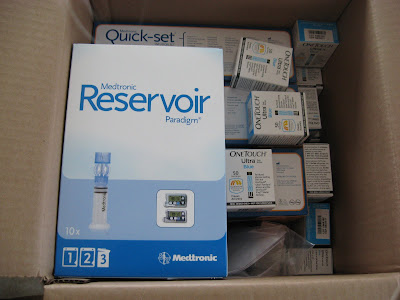 Which reminded me that I had forgotten to tell you about the latest diabetes support group meeting where Eve, our Diabetes Educator, shared some info from the Diabetes Technology meeting of 2009. Usually thousands of people from all over the world attend. This year only 600 did  - I guess the economy is hitting everyone.
Some Points of Interest

For those with Type 1 (that's what I have) they are working on:
-Oral-lyn, an insulin that's sprayed into the cheek.
-Nasulin, yeah, you guessed it, sprayed into the nose.
-Inhaled insulin – the industry has had problems with this, but is still working on it.
-IN-105, an oral insulin in development. It would be in tablet form.

As far as the artificial pancreas goes, they are still working on math formulas, using computer simulation. This whole issue of an artificial pancreas is so enormously complicated. Which makes you realize how complex, wondrous, and perfectly designed a fully functioning human body is.

Information for people at risk for Type 2 diabetes:
-They are working on a drug called Oxima that will be used with metformin (don't know what that is) and diet for prevention of Type 2 diabetes for those with metabolic syndrome (weight carried around the waist, high BP, insulin resistance, and so on).
-There is also a new test called Pre-DX to see who's at highest risk of developing Type 2. It measures a hormone, C - reactive protein, and insulin.
Also in development: Better needles, better insulin, and better insulin pumps among some other very technical, medical, stuff that I won't go into here.

Are you hanging in there: While I know this is interesting to some, I worry it may be boring to others. But diabetes is an epidemic of scary proportions and since I'm so fortunate to go to this great and informative group meeting every month, I feel I must share what I learn.

But let's take a break and a look at a pretty little cup from England. The plates in the background and the cream pitcher belonged to my grandmother. 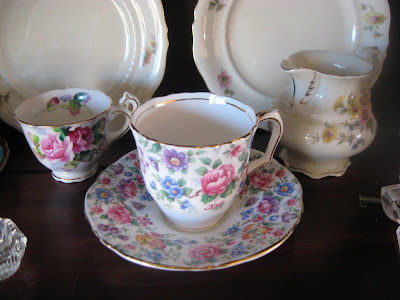 OK, break is over!
Eve went over eight weight loss drugs that are in the works at various labs. Since it will take a long time (see below) before they become available, I will not go over them here.

Then she went on to provide some interesting data about clinical trials and the cost of developing new drugs:
-In 1975 it cost $138 million to develop a drug. Now it costs $1.9 billion. Only 31 new drugs were approved in 2008. It takes 10 - 15 years to develop a new drug and only 2 in 10 drugs return the cost to develop them.
-An interesting fact I didn't know: Few other countries spend money on research and development of new drugs.

Finally, I'm sure you all will be glad to hear that they are working on an anti-aging drug called Progensa.

After all this medical stuff, let me leave you with a sunset in winter. Or maybe a sunrise, looks like that could be it. There are almost NO clouds here in the summer, but in the winter they are magnificient. 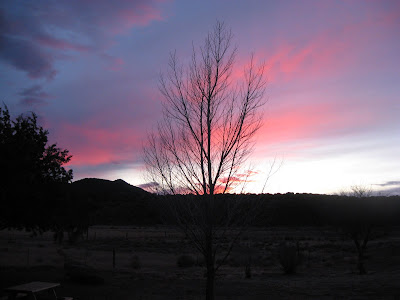