How Rachael touched my heart and made me smile....

Sometimes things happen that touch your heart and make you smile. Yesterday, was such a time for me. This is what happened:  My friend Rachael drove up from Burbank to visit me. She knew I hadn't been feeling well so she came loaded down with gifts, both practical and fun. I think she tried to pretend she thought my birthday, my very big birthday, was just around the corner, but I know that she really felt I needed some love and care right now. I've learned to accept with gratitude all the good things that are coming my way these days and I'm so immensely grateful to have so many really good and caring friends. 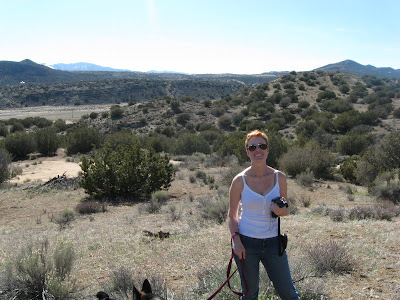 Rachael with a view of the canyon in the background.
Rachael is an animal caregiver extraordinaire, who is in the process of starting an animal education program called Sydney's Legacy. Sydney is an aged bearded dragon lizard that Rachael took in a few years ago. She and I promptly fell in love with Sydney, who is the most charming of lizards and who taught me a lot about an animal species with no fur, no long ears, and not too much else to inspire love, yet love him I do. I will never forget him and all he taught me about animals and the respect we need to show them, be they lizards, snakes, tarantulas or what have you. When I knew Sydney a few years ago, he was full of life, fun, and charm. Sydney is old now and sleeps most of the time, Rachael tells me, but his name will live on with this program she is starting.

Almost two years ago one of Rachael's critters, a California desert tortoise, named Gwendolyn, passed away at the age of 40-something. We buried her here in the canyon and Rachael wanted to visit her grave and put some flowers on it. So we hiked up there with all three dogs that were so happy to finally be taken for a long walk. 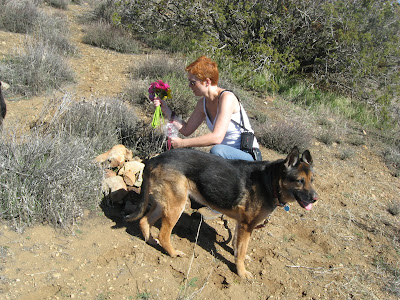 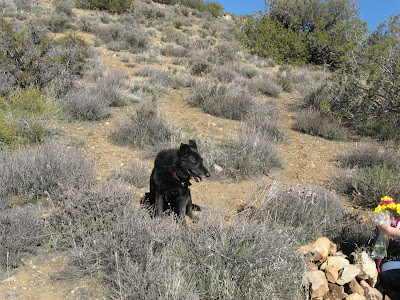 Princess is looking on with interest. 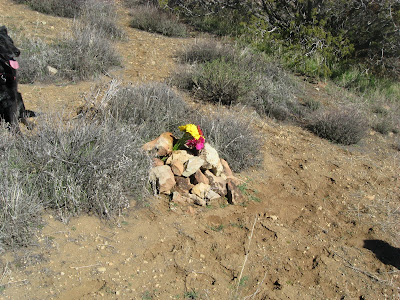 After we remembered Gwendolyn, Rachael and I took the dogs for a hike. As you can see, it was a warm day, the warmest in many weeks, with a feeling of spring in the air. 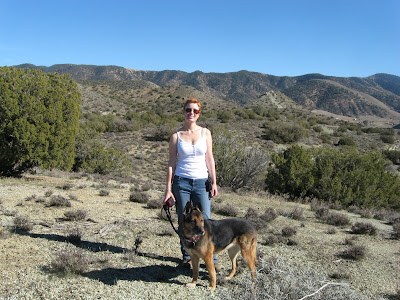 Rachael with Angel.
And here I am after we got back home. The dogs were not cooperative as far as getting their picture taken. Princess left, Angel turned her back, and Soldier found a bone and chewed it up before I could take it away. 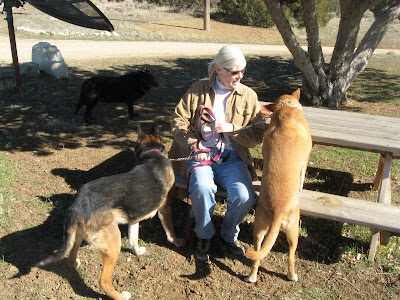 After the hike Rachael treated me to dinner at one of the best Mexican restaurants ever and, yes, it's right here in town. It felt so good to see Rachael again and her visit reminded me, as did my visit to Carol's place last month, that much as I like my hermit life, it's important to actually see your friends in person, to talk, touch, and share face to face.
You can find out more about Rachael and her critters on her web site and blog at: http://web.mac.com/rkomulainen or just click on It's All About the Animals in my sidebar at the bottom of My Favorite Blogs.

Coming soon to my blog: More about Rachael's critters and her new venture. Come back and visit, they are not farm animals, but they are some great critters. I promise you!
Posted by Inger at 1:36 PM