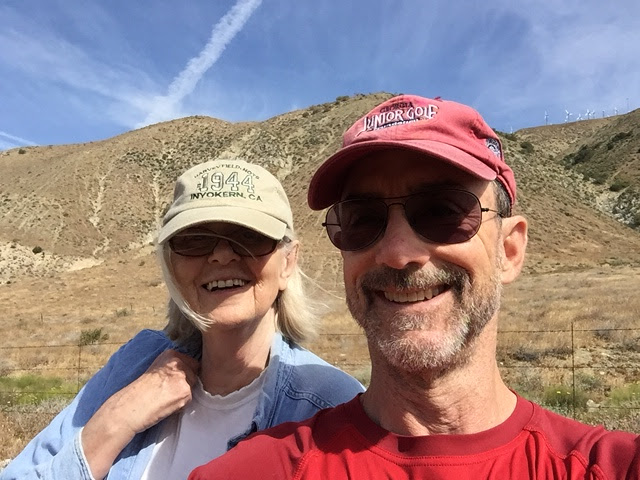 Tom was Errol's friend since the late 1970s and became my friend as soon as I met him in the mid-'80s. He lives in Seattle now, to be close to his grandkids. After spending some time in Los Angeles on family business, he came up to see me. And he wanted to help, to fix, to work. Didn't tell me how much he suffered from bad discs and arthritis. 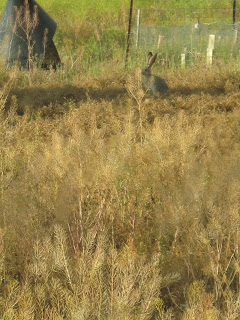 Can you see the young Jack rabbit?

First he spent an entire day with the weed-whacker, whacking down all the weeds the tractor guy was unable to reach and I had feared would keep me weeding for weeks to come. Then he hurt, but still wanted to work, so we set to work on the dog run. I wanted everything out: Errol's greenhouse and all the containers inside, some huge; the BBQ, the smoker, the wood container, and various items strewn around. We took Old Betsy to the dump with her entire truck bed filled to the max. 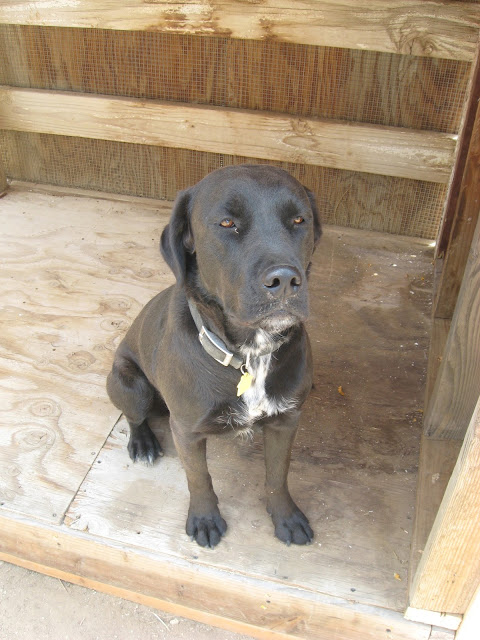 Faith just rolled in the sand, which is why she's a dirty dog here. Looking mad too! Like, why do you make me pose for pictures, mommy?

Then we drove to Home Depot and bought several things I needed, including a new garden hose, plus a few things I didn't know I needed, like a washers, screws, and stuff like that. And plywood for a new doghouse Tom felt the dogs needed. A labor of love with a raised floor, new plywood on top and to one side. I hope the dogs will appreciate it. So far they are ignoring it in favor of intense gopher watching through the fence. 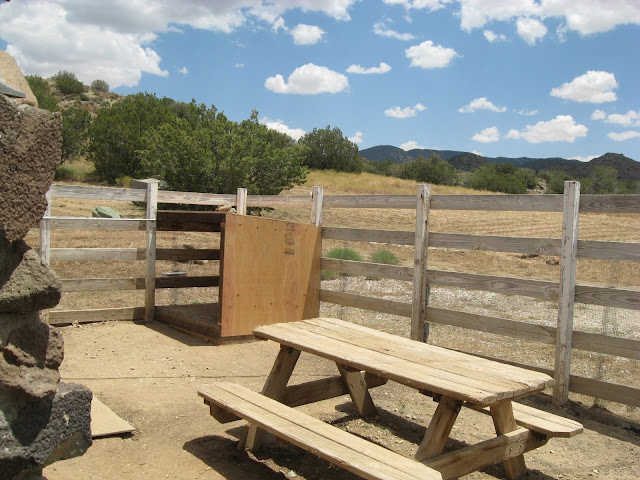 Their table is all that's left now. I'll get a chair so I can sit out there with them in the mornings and evenings. That's it, they will have plenty of room to run around. 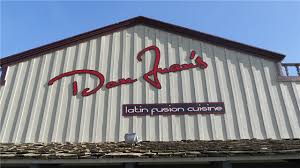 Tom also drove me to my eye surgeon appointment in Bakersfield, where I got examined and scheduled my cataract surgery for early August. To thank Tom for all he helped me with I took him to dinner at my favorite restaurant in town, Don Juan's Latin Fusion. Where Tom had a huge steak, I had salmon, and we both 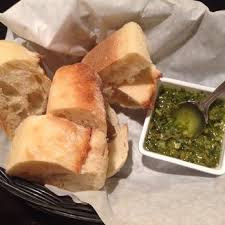 feasted on heavenly rolls smothered in this delicious sauce, which I forget the name of now. 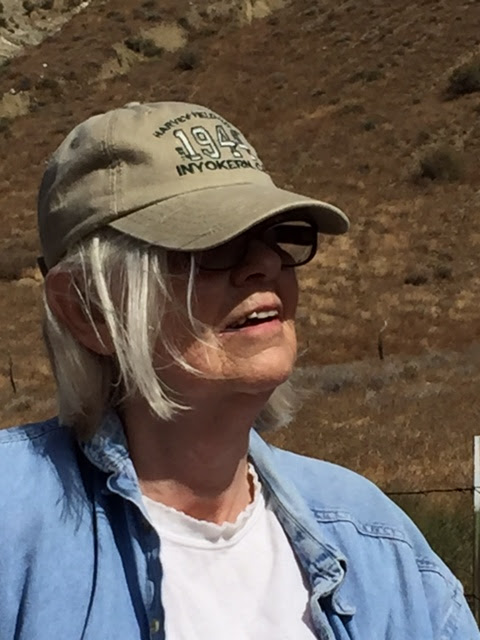 Both Tom and I love to hike and are fascinated by the hikers who walk the Pacific Crest Trail. Since the trail actually goes through the mountains not far from here, we decided to get up early on Saturday and go and walk a little bit of it. 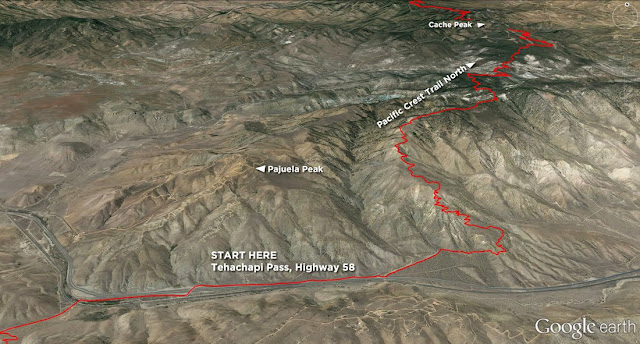 We headed down to Cameron Road where the trail head is located. A trail angel, a local who helps hikers find the campground and other places in town, just let two young women out of his car. Both women, though not together, had hiked from the Mexican border and hoped to make it all the way to Canada. 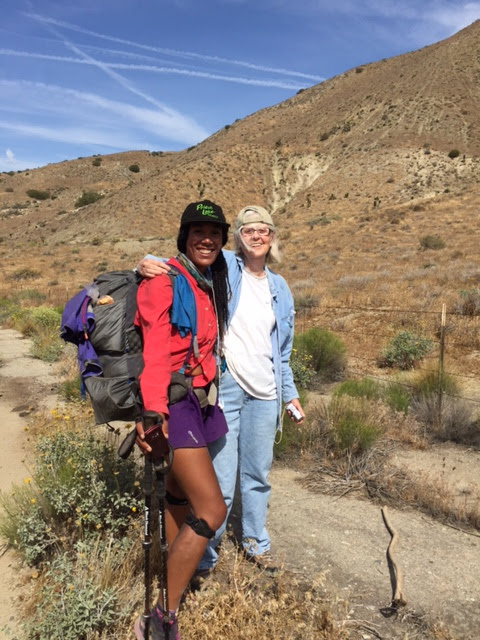 This is one of the women. She began her hike at the border on April 20th. When I asked if I could take her picture, she exclaimed: "You gotta be kidding me!" I said, "no, you are just gorgeous and I'm awe of what you are doing!" So she smiled and Tom took this picture. 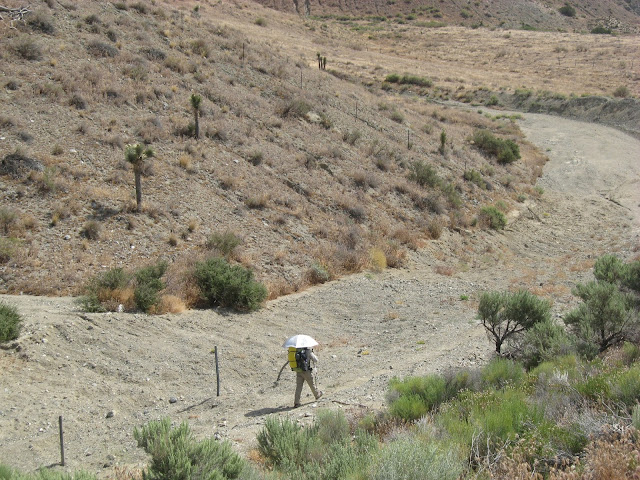 Unfortunately, I lost all my pictures from the trail because I was tired and clicked the wrong button in Picasa. But Tom had his, so all was not lost. Look at this dude! 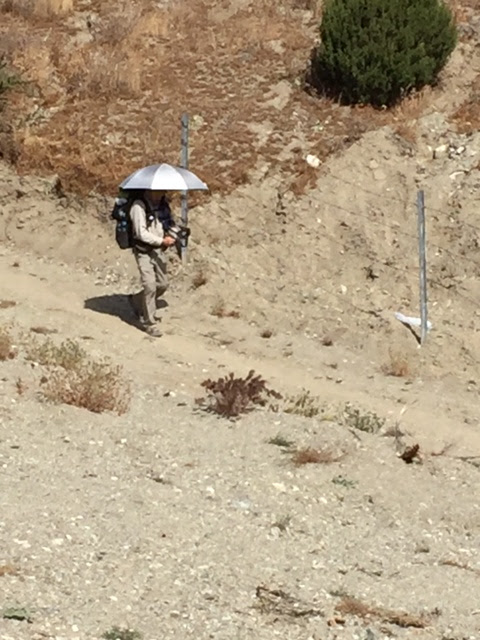 From a distance he looked like someone from outer space, but as he came closer we noticed his clever umbrella. It fastened to his backpack and had sun reflectors on top. Must make his hike through the desert parts a bit easier, I would imagine. 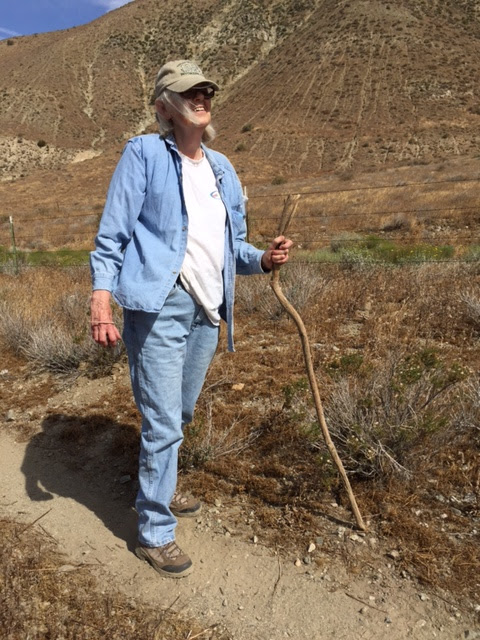 This part of the trail goes next to Hwy 58 before it veers off into the Sierra Nevada mountains behind our canyon. I only walked about a quarter mile along the trail since it wasn't that much fun next to the highway. And we had lots to do that day. But at least I have now walked a very, very tiny portion of the wonderful adventure that is the Pacific Crest Trail from Mexico to Canada.