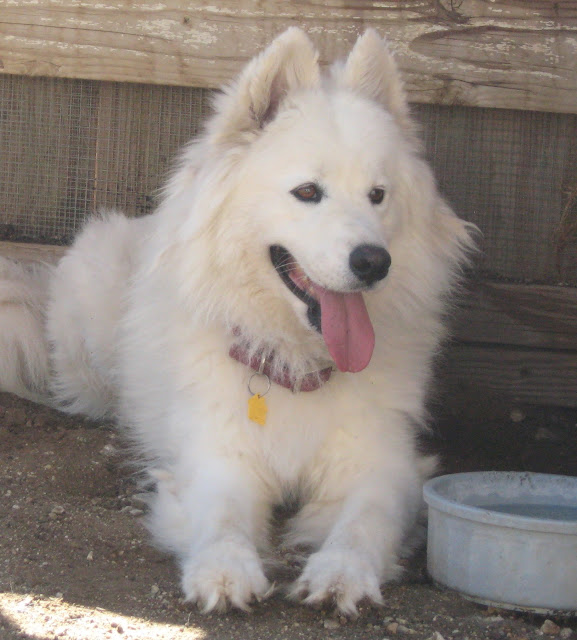 This is one of my favorite pictures of Samson as a young dog. He was truly awesome-looking and so sweet. And he still is, of course.

This is just a quick post to thank you for your comments and to respond. First of all, thank you so much for reminding me that all of us responsible dog owners feel guilty from time to time.

About the bears, yes, we have black bears here, but they haven't been around for several years. Back in 2013, my neighbors tried to keep bees, but that didn't work, the bears would first go there and get the honey, then come here and tip our trash cans. They also liked our vegetable garden, which was huge, so we had to put up a tall fence around it. And every fall they would come and pull branches off the junipers to eat the cones. In this entire area, black bears are most common here in the canyon, whereas cougars are more common in the areas to the west of town, where they have elk and a lot of deer. 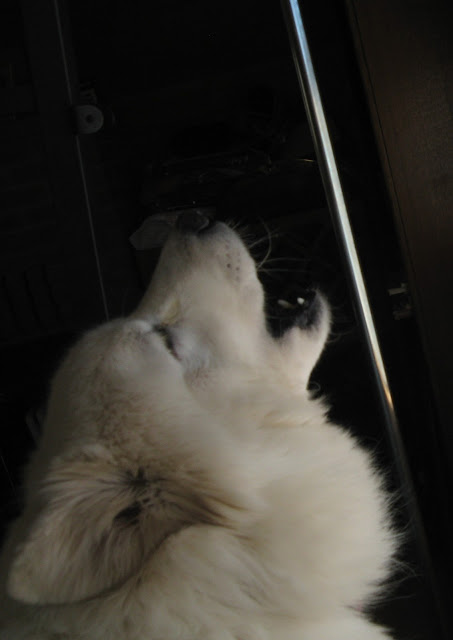 But I wanted to write about Samson's bear reactions as opposed to his reactions to other critters. I don't know why the way he communicates is so different:

Dogs: The strongest and most annoyed bark and running around displaying intense displeasure. Displaced agression fights with Faith, initiated by her.

Coyotes: A strong, agressive bark, but less so than for domestic dogs. Seems more protective of Faith and me. Samson takes his protection duties seriously. No fights with Faith.

Bears: No barking, just runs around the dog yard with nose in air, whining. Very anxious, but not giving way, staying out there, sniffing the air and whining. He never whines at any other time. Faith was not here when we had bears around us.

Pocket Gophers: If one peeks out of a hole close to his fence, Samson goes bananas. He disregards all other small animals, including rabbits, but, for some reason, these guys drive him nuts. Since I walk him on a leash, I have to make sure I see their mounds before Samson does, or he will pull a sled dog move on me, his shoulders are so strong, and I will go flying. Wishing, I too had four legs.

Do your dogs have different barks for different situations?

I have done nothing about my new camera. I probably will find some time this weekend.

So, no pictures of the bear tracks, which Samson set about to destroy anyway. I could have tried with my phone, but as I said earlier somewhere, I'm not good with phone pictures. 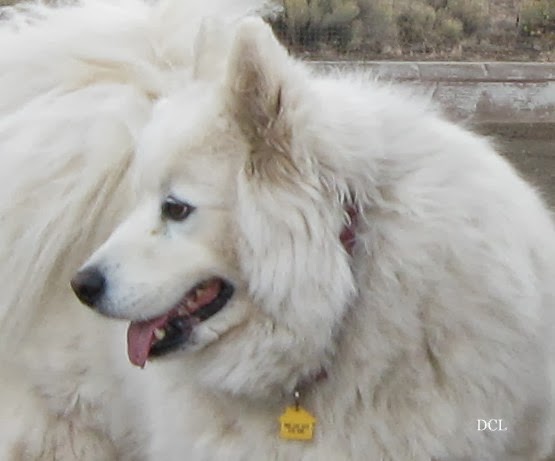 Finally, the vet was very happy with Samson's eyes. He also didn't want to do another blood test to check Samson's kidneys. Instead we tried to make Samson pee in a ladle, without success. So I was sent home with a two-week supply of kidney medicine and the task to collect a urine sample. Never had to do that before, not sure what will happen. And I will use a pan, not a ladle.

I also decided it's time for the groomers, the weather is getting warm, so a bath, a good brush-out, trim, and shaving his tummy will be so good for him.