I'm trying to come up with new things to post and write about. I think it could be fun, at least for me, to at the end of each month, post a summary of what I did, how the weather was, and so on. Fun to look back on. I had this idea a while ago, but never pursued it. We'll see how it goes. 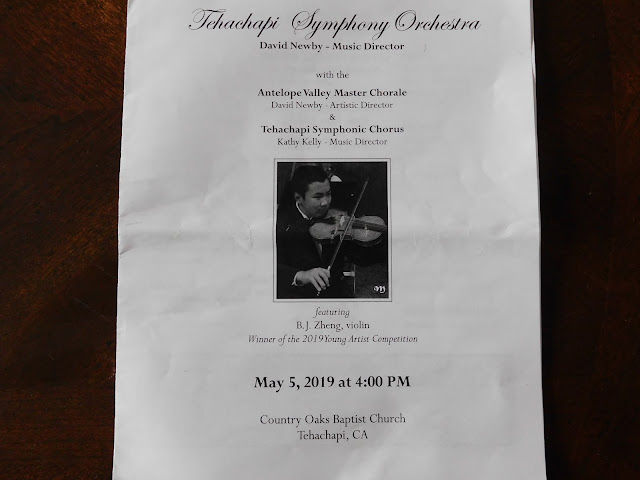 The month began with a concert by our Symphony Orchestra. 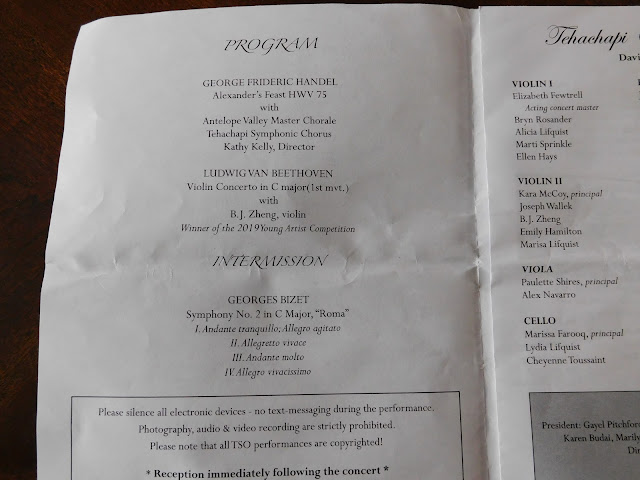 The young violinist featured in Beethoven's Violin Concerto was very good and my favorite of this program. I had never heard of Alexander's Feast before and found it interesting. I also didn't know that Georges Bizet wrote a symphony. He wrote this one at age 17.

The director is excellent, a great guy who told us the story of Alexander's Feast in detail, which made it easier to follow and understand. At the end of it I had a very nice day out, listening to good music with friends. And if I'm ever asked about Alexander's Feast, I will know a little about it.

Since I can't tolerate any cholesterol lowering drugs (again, my cholesterol is fine, my heart if fine, but certain doctors are so worried because I have diabetes). While I eat greens most every day, I just don't eat a lot of food.

I always dreamed of being able to drink my food, so when my diabetes nurse/educator realized we weren't getting anywhere with the drugs, she suggested I get a blender and start drinking lots of green smoothies. I liked her idea and found a Ninja Pro blender on sale at Amazon. Now, on the days I'm home, I drink two glasses like the one above. It's such a  great way to ensure one gets enough greens, fruits, and other veggies.

Being a good patient and trying the various drugs resulted in lower LDL, yes, but also in an entire year of feeling sick and miserable. 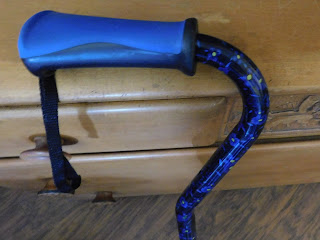 My legs started to get wobbly, probably from this winter's inactivity due to the miserable weather, and I began to feel insecure walking across parking lots and such. This is what I bought to help out.

I and a group of CERT members from the canyon took a First Aid class this month. We followed a very good book, which as it  turned out, we couldn't keep. It was not included in the cost of the class. I took a picture of the address above and meant to order it. Maybe I will, not sure.

Joyce is milking her cow and I got milk that was so rich and creamy, that, due to all the saturated fat, I have to say no to in the future. She also made the best yogurt ever! That I'm not saying no to.

All the critters are so happy grazing in the tall weeds.

Samson is looking miserable here, but he's not really. Just glad to get rid of some of his undercoat. He's a mess because I haven't taken the time to work on him. Now it's getting warm, so I have to do it. I will take him to the groomers toward the middle of June. Until then, this will be a daily chore. Most days anyway.

I just read in the paper that our area received more rain this month than in any May in over 100 years. Still, nothing much compared to the rest of the country, flooded and in the path of all those tornadoes. What you see on TV is unbelievable. 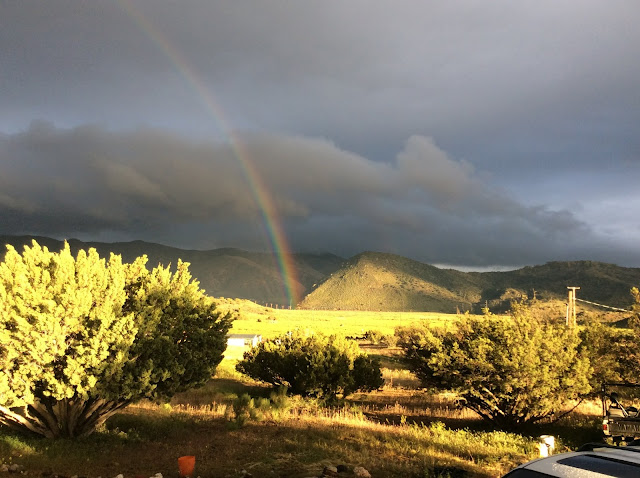 Then there was the pot of gold that Joyce found at the end of the rainbow. Thank you, Joyce, for this lovely picture and the one below.

My place with the 100 ft. required clearance for fire safety. Joyce climbed her mountain and took this picture. Love it; it's so much fun for me to see my place from above. 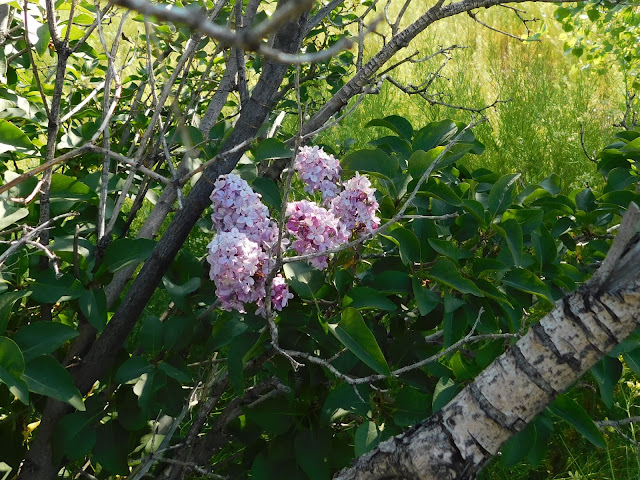 My lilacs bloomed for the first time since 2012. I remember the year because they bloomed when we buried our German shepherd dog, Angel, who came the day before my cancer surgery and never left my side for 13 years. She was my dog and one of the great loves of my life. The air smelled of lilacs that day and, as we buried her, two white doves appeared, pecked on the ground for a while, then flew away. Never to be seen again. A magical moment.

My new friend/helper, Ronica, found this big white rock, that glitters like it's full of silver, when she was looking for treasures among my trashy stuff. This rock is now part of my rock pile. I love my pile, by the way. Thank you, Christina, for suggesting that I cover the old tub with rocks. Never did I think I would find rocks like those at Grace's house though.

Mark and Ronica cleared my land for me with the help of Joyce's tractor. They will help with many other things around here. If they see something they like, they will work for it. They both seem to have a good sense of the value of old things that can be repurposed, which is great for me since I need to get rid of a lot of stuff. 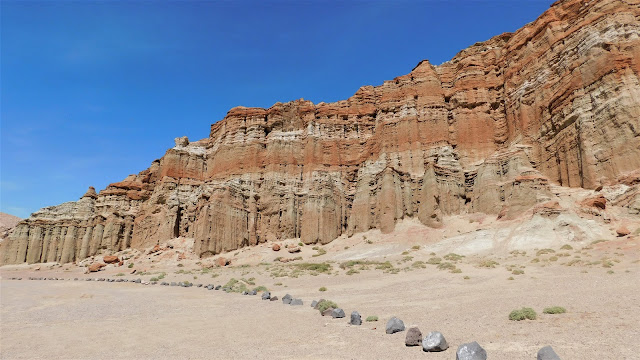 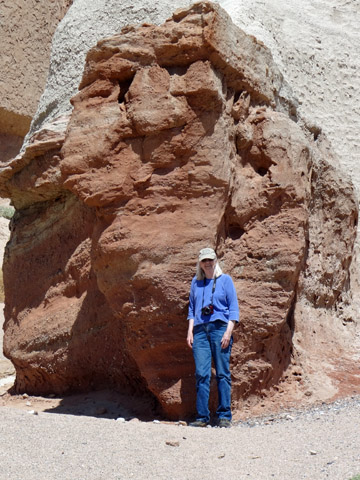 I enjoyed more rocks at Red Rock Canyon where Jeanne and I went this month. 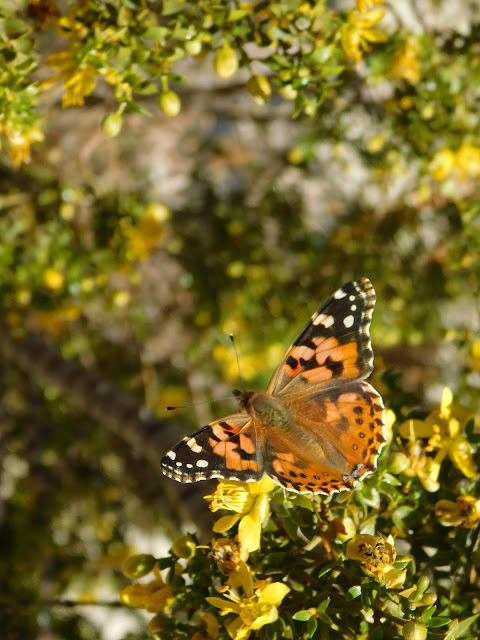 This May, our area and the desert below were covered in Painted Lady butterflies, who traveled through on their way north. They are low-flying and I felt so bad as I killed lots of them with my car. I felt a bit better when someone pointed out to me that they are excellent food for our birds.

After their desert superblooms in April, the poppies arrived on the mountain in May. They are still here, all around town. I took this picture by our bank's parking lot. I always wanted to take a picture of the old sheds that still stand there. 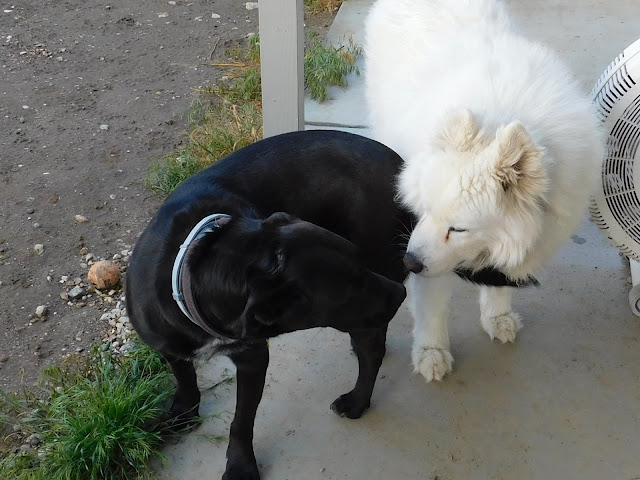 Samson and Faith are both doing well. We have started our morning walks again and that's making them so happy.

So that was my month of May. An extremely windy and rainy month, but a good one for me. And now the sun shines, summer heat is on its way, so is my birthday. I will try to not complain about either.