Hello everyone, I'm coming down with a cold and with my diabetes, it may turn into something worse, like bronchitis, or it may just linger for a long time. Or I may be OK tomorrow.

Because I don't know, I will take a blogger break after today, get some rest, and come back when I feel better. I must be back by 7/7 because someone has a big birthday then. Samson will be 10!!!

I will read blogs on my Kindle, but I can't leave comments because I find it so hard to do all that thumb writing.

Here's an update on the month of June. 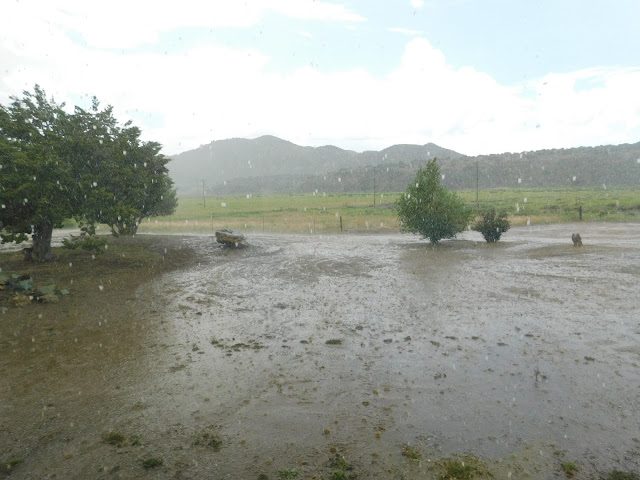 June came roaring in with a rain and hail storm, accompanied by flash flood warnings. 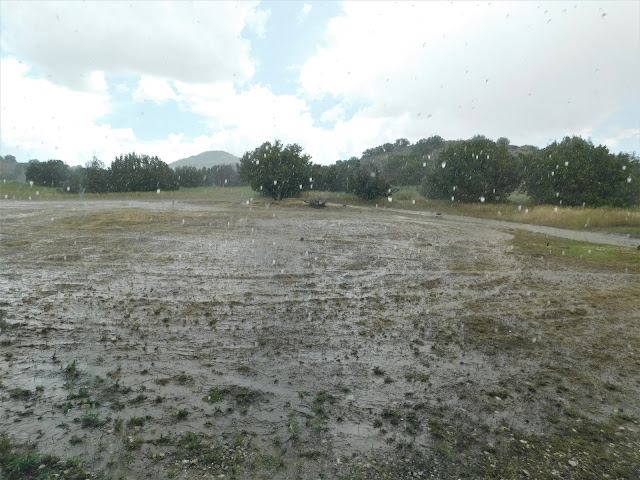 The storm only created a muddy mess. Seeing how so much of the rest of the country suffered with tornadoes and floods, this was nothing, just a surprise rain at a time when we usually don't get any. It may well have been the last rain we see until November. I heard more rain storms may come during the summer months, which would be nice. 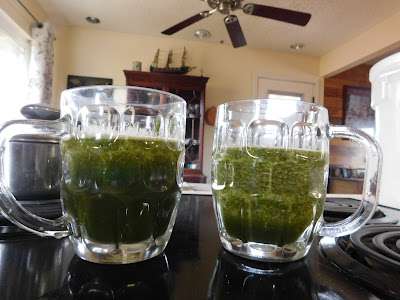 I continued with my green smoothies and, after about a month, began to feel something I had not felt for the past  two years - ENERGY! I thought it was normal for me to feel so tired, both due to the diabetes and my advancing age. 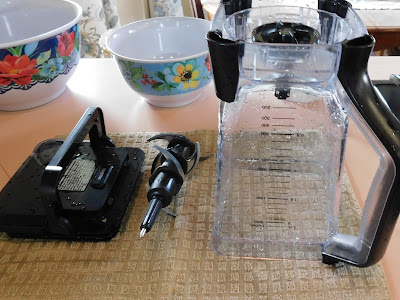 I came up with a fast way to rinse off the blender and just set it on the counter. It helped to have a designated space for it. I'm lazy in the kitchen, so anything that helps me do what I need to do is a good thing.

The metal shed got cleaned out and demolished.

Flowers that disappeared in the drought returned, as did chipmunks and loggerhead shrikes. I'm hoping the Western meadow lark and many other birds I haven't seen for a while will came back as well. Maybe a bear and some bobcats??

Still, we had some drama here. The Guernsey bull is now fully grown and there was a real bull fight where he got injured. Then he injured his leg. Here he's kept outside the fence, but still challenging the Devon bull. Joyce has to keep him separated from the rest of the herd while his leg heals. Then she may have to sell him. He's my favorite, so I will miss him, but two fullgrown bulls is one bull too may.

While I took pictures of the bulls, the rest of the herd looked on with interest. That's Ears or Angelears to the right. How she's grown so fast.

Joyce and I visited Sally, an English friend of hers. We went to see these puppies. They were only five days old and so cute.

Sally has a large, very English, garden at the other side of town. What she has accomplished in this dry climate is amazing.

It was a huge surprise and so much fun to meander around, seeing hundreds of plants, one surprise after another. I loved the day -- and, of course, we were treated to English tea and biscuits before we left.

And began to dry out. I have the 100 ft. clearance around my house, that's all this year. The tractor guy used to do this field and all my surrounding fields as well, but since we borrowed the tractor and I wasn't sure how much Mark was comfortable doing, we only did the required 100 ft. 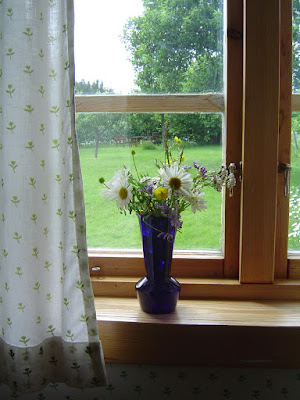 Then it was Midsummer's Eve in Sweden, coinciding with the summer solstice and my birthday this year. I had several great surprises on my birthday and, according to my niece, it's not over yet. I will drive to Lancaster to visit with them in the coming weeks. It's only about 45 miles away.

Two new neighbors moved in on Joyce's property. They are both men, one brought three horses and a pony; the other a sweet dog named Cheyenne.

As new people and critters arrived, old things had to go, including the old tow truck that I like so much. When an opportunity presented itself and someone really wanted it, I couldn't say no.

Faith on my bed (not on her Blankie, where she's supposed to be) contemplating something. She often looks like she's deep in thought, more so than any other dog I have lived with.

Finally, poor Samson, who was dirtier after this long, cold, and wet winter with a thick and matted undercoat, much worse than it has ever been, went to the groomers and came back white, fluffy and much relieved to be rid of all that fur.

It's clear  that I need to take better care of him, well, I knew that of course, and believe me, the guilt has been present, but so has my tiredness and feeling unwell. Now that the green drinks have provided some energy, I will work with him, beginning right now, while he's clean and trimmed back. Then I just have to keep taking him to the groomers throughout the year.

So that was our month of June. A pretty good month with much accomplished thanks to good people all around.