In the early summer of 1999, I was diagnosed with breast cancer. It was found early via mammogram and I was scheduled for a lumpectomy at the beginning of July. This was to be followed by six weeks of radiation, later an extra week was added, and then five years on the drug Tamoxifen to prevent a recurrence.

The night before my surgery, Errol and I stood by our gate saying goodbye to Glenn. Our Los Angeles house was close to the sidewalk with steps leading down from the gate.

The steps outside our LA house

A couple walked by, followed by a German shepherd dog. The dog saw us, ran up the steps and sat down outside the gate. Errol called for the couple to get their dog. "It's not our dog, it has been following us," said the man. We all looked at each other and the dog, like what in the world do we do now?

I said, "Glenn, do you want another dog?" "No," he replied. And then made a fast exit, leaving us to figure it out.

Three pets per household were allowed in Los Angeles. At that time, we had: Sundance, our disturbed Doberman, Sashi, our loner Siberian Husky, Bandit, our mischievous hound dog mix, who did not get along with Sundance; Samantha and Sindbad, our two cats; Tweetybird and Pippi Birdie, our two parakeets.

I was having cancer surgery the following day, had to be at the hospital very early. Then radiation, not as bad as chemo, but no piece of cake. 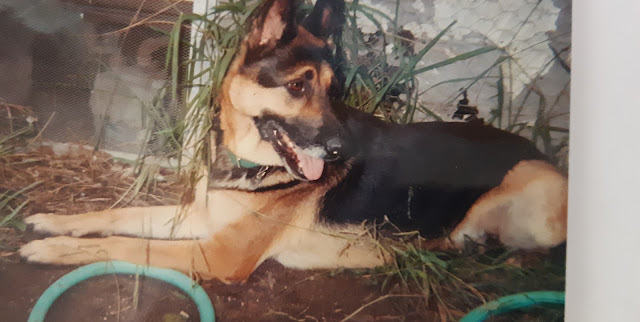 Angel as a young dog

And here is this adorable dog, wearing no collar, looking a bit thin, but very well taken care of.

First thing, check to see if male or female. It was a female. She had been spayed. She was very young (later the vet estimated about eight months). She seemed to have been very well cared for, but she had no collar.

I told Errol I couldn't cope. I would have a fit if we took in another dog. I knew she had chosen us, or so it seemed, but still. I was overwhelmed.

Errol took her to the pound. A while later, he came back with the dog in tow. Errol said, "she started to shake so violently when she heard the barks from inside. She shook and struggled to get away from me, to just run away again. I couldn't take her in."

Errol promised to look for an owner, I said I would take her picture so we could post it around the neighborhood once this surgery was over with.

Then we looked at each other, the dog and I. I felt she belonged with me. Maybe an Angel come to look after me. Help me through this ordeal I was facing.

But much as I like the concept of angels to protect me, I'm also a realist and of course I knew this was a lost dog, a dog that I would have to feed and walk and take to the vet. With cancer, no matter how small the tumor, how early it was found, there's always fear of what will happen.

I felt I needed all my strength to fight this uninvited cancer.

Not the ideal time for yet another lost dog to come and live with me.

But we had bonded, whether I liked it or not.