While Faith has that strong  me first personality when it comes to living in a two-dog household, there's another, much deeper side to her.

It soon became clear that Faith understood grief and would find ways to make my tears dry up, make me want to play with her, to take her and Samson for daily walks. 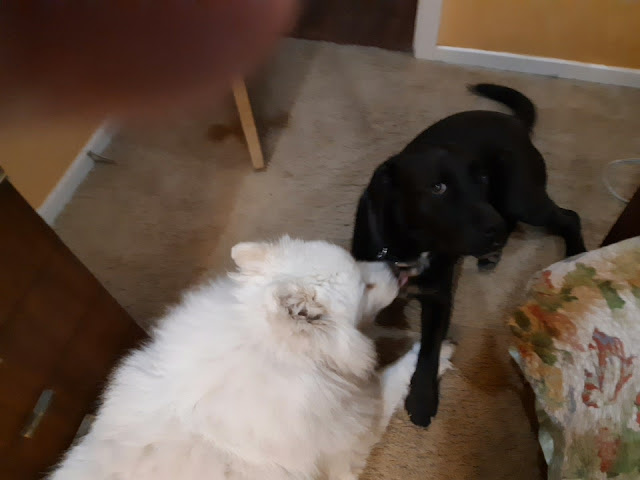 After Errol died, Samson became depressed, he wondered what had happened to his beloved dad. I had never seen a dog grieve before and was at a loss about how to best help him. But Faith was there for him, as she was for me; she played, she didn't take no for an answer, she demanded walks, she demanded playtime, she offered her ears for Samson to lick. He has a thing for ears. And somehow the three of us made it through. 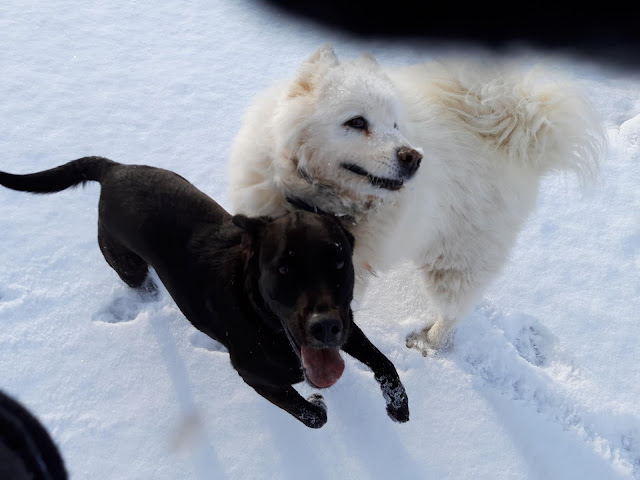 Let's run and play in the snow! 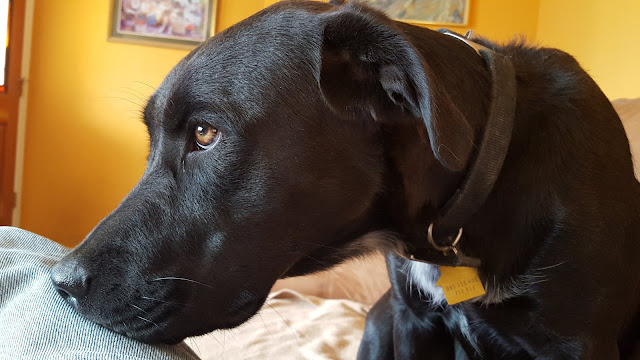 Faith rarely leaves my side when we're in the house. She follows me around, she reads my moods, my diabetic ones particularly. She knows when my blood sugars are low and I need to eat immediately. She understands when it's time for both dogs to leave me alone in the kitchen so I can quickly fix my food. She has the brains and understanding to be a low blood sugar alert dog.

Talk about brains. Faith is my 12th dog and I've never known a dumb dog. They each had their own personalities, joys and fears. I've known city dogs that understood cars, the danger of streets, how to behave when you met another city dog out for a walk. I've known country dogs who could run around acres of land and never get lost, who could herd cattle, who knew a rattle snake when they saw one. All of them had the smarts to do what they needed to do.

Faith is a smart dog, there's no doubt. But more than any other dog I've lived with, she has an intense desire to please me. I think one reason is the Labrador in her, another is that I trained her from when she was little. Through that we bonded and our bond is very strong.
Faith is only the second puppy I've trained, the other was my Dalmatian, Troll. He had a very hard head, much like Samson he understood everything, but decided when it was a good idea to do as asked. Troll also had a sense of humor, which made living with him a delight. 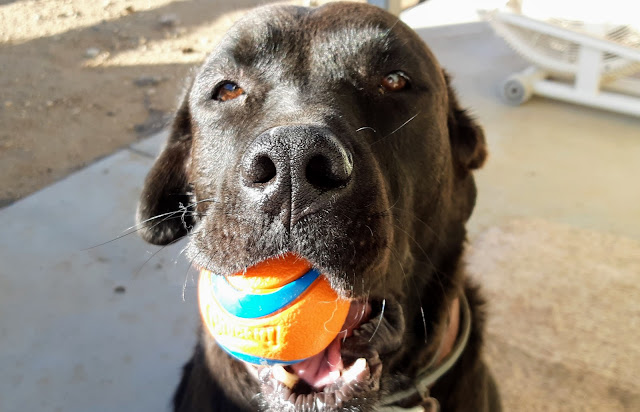 Faith loves to retrieve, she loves her orange balls. She always loses them under the couch. Then she chews on her bone until I get the balls out. I have one of those ball thrower things and she loves to play and chase the ball more than anything. And she can run, this dog is incredibly fast -- and was even more so when she was younger.

Faith has never been to a lake, but I'm sure she would enjoy a swim if given a chance. I often wonder what else she is, but I never had her DNA tested.
Errol was right, Faith has been a good ranch dog and then so much more. She's my support dog and one of the greatest loves of my life.
Posted by Inger at 1:00 AM