to Bakersfield, on Monday. I was scheduled for a CT scan of my chest at Kern Radiology.

With the holiday this week, it will be awhile before I know the results.
In order to learn the results, I need to schedule another appointment with the Nurse Practioner, henceforth (oh what a lovely oldfashioned word) the NP in this story. Except I don't think she will appear in it again.
I will then learn if I have COPD and also if I will need to use oxygen during the day. Day and night. -- All the time.
Something I feel she could tell me over the phone. The cancer surgeon from UCLA called me to tell me I had breast cancer. It was a Thursday, trash day, and the noisy trash truck was on our street, rumbling away. I will never forget it, but at least I didn't have to drive a long way to find out.
Strange thing is, I have no symptoms that I notice, just a little out of breath walking uphill. But the oxygen meter on my finger during the night told the night-time story, which determined that supplemental oxygen was needed.
For the record: Yes, I smoked, both my parents smoked. On December 21st, I haven't smoked for 28 years. Unfortunately, I've inhaled a fair amount of smoke from wildfires since then. 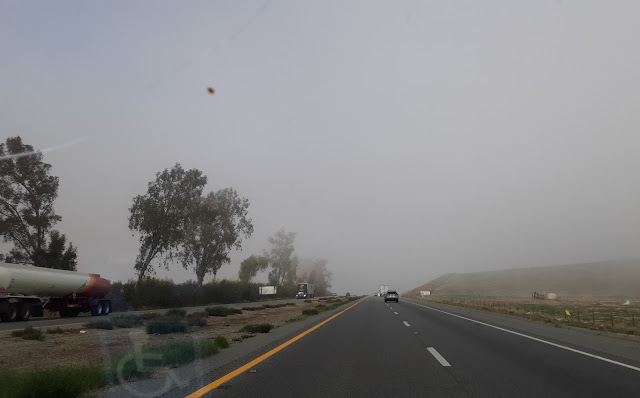 From Novemer to March, fog is common in the Central Valley.  Tule fog, which is a radiation fog, can be very thick with low visibility, sometimes as little as eight feet. Fortunately, this fog was just the usual smog/fog morning condition in the valley. It disappears shortly after sunrise.
I was very lucky after we arrived at Kern Radiology. First, there was no one in line to sign in. I was given the usual sign-in forms, I never filled anything out, as soon as I signed the forms, I was called. Jasmine came with me and we walked to the room with the scanner.
I've been in MRI and other machines where you have to stay for more than half and hour sometimes. Here, I was just partially inside the machine, the tech did a few things, said, "inhale, hold your breath," a couple of times and I was done.
It was the fastest and easiest test I've even had done.
Pretty soon, we were going back up the mountain, where I did one tiny little backseat driving comment, which I immediatly regretted and aplogized for. It's not always an easy mountain to manuever up, with it's multitude of trucks. Those with heavy loads going at close to standstill speeds.
Jasmine did great!

And soon we turned in on my road and were home, greeted by two happy dogs.
I'm so grateful for Jasmine's help. It's making a huge difference in my life.
Living here, so far from everything, I can't afford to not want to drive. Fortunately, I still enjoy it and my new car.
Posted by Inger at 1:00 AM