A Brief History Of The Nordic Cross Flags

From Left to Right:
Finland
The white in the Finnish flag represents snow and the blue cross the many lakes of Finland. The flag was adopted after Finland's independence from Russia in 1917.
Iceland
The modern flag dates from 1915, when a red cross was insterted into the original white cross. The flag became the national flag when Iceland was granted sovereignty by Denmark in 1918.
Norway
I found a deep history of various flags going back to the Vikings in the 9th century. The present flag of Norway was designed in 1821.
Sweden
According to Wikipedia, the blue and gold colors are believed to have been inspired by the coat of arms of Sweden with the design modeled on the Danish flag. The origin and age of the flag is unknown, but its existance is confirmed as of the middle of the 16th century.
Blue and gold have been Sweden's colors at least since the royal coat of arms of 1275.
Denmark
Not only does the flag of Denmark have a name, Dannebrog, it also holds the Guinness World Record for the oldest continuously used national flag.
According to legend, the flag came into Danish possession during the Battle of Lyndanisse in 1219. The Danes were on a failing crusade in Estonia, but after praying to God, a flag fell from the sky. 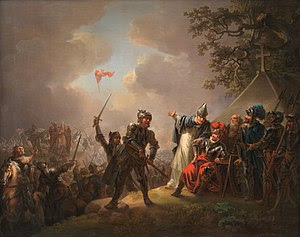 As a result, their luck changed, the Danish army won and Denmark got its flag.

The Nordic cross flags represent not only their countries, but are also symbols of Christianity.

And yes, there are several other countries that also have cross flags.