Midsummer, A Wedding, A Birthday, And A Bad Puppy


In Sweden, Midsummer was celebrated this past weekend with trimming of Maypoles, followed by dancing to music played on accordions and fiddles long into the light summer night. Well, that's how I remember it anyway. Tradition also has it that if a young girl picks seven different wildflowers and puts under her pillow, she will dream of the man she will marry. Of course these are old, old traditions and I don't know what modern families do. But I saw Maypoles when I was there in 2005 and I also picked this small bouquet of wildflowers and put in the window. 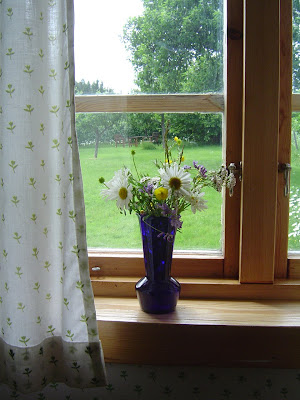 Saturday:  In Stockholm, there was a wedding: Crown princess Victoria married her long time love, Daniel. I believe they met when he was her personal trainer; at least that's what they said on CNN. 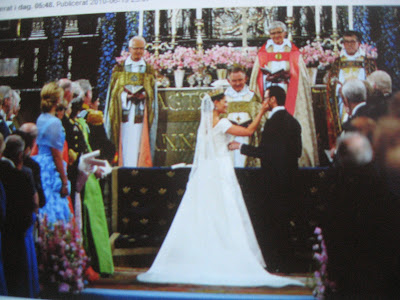 These photos from my computer are not good, but I loved how she reached out and touched his face during the ceremony. Such a sweet gesture. 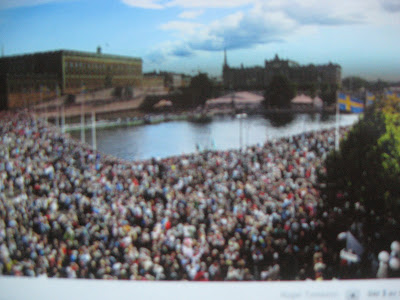 All these people, 500,000 of them, gathered to celebrate the event. Whether you support the monarchy or not, a love story will always make you smile.

Sunday: Fathers Day -- I watched the end of the US Open golf championship at Pebble Beach, California. A young man, McDowell, I think his name was, from Northern Ireland, won. It was emotional for me to see his dad run out to embrace this son after he won. I could relate to this, coming from the old country and experiencing something that huge.

Monday: Summer solstice, longest day of the year (in Stockholm there is no midnight sun, but it doesn’t get dark either) and my birthday. I have a sentimental love for Sweden this time of the year. And who wouldn't…it's so lovely. 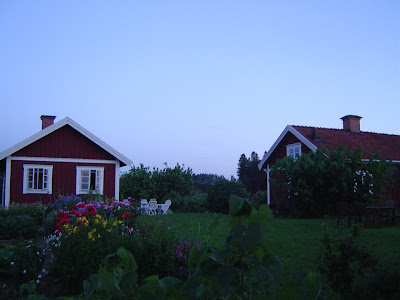 A midsummer night south of Stockholm.
This year, my birthday was HUGE: 70! When I was young, I thought for sure you were supposed to feel pretty old by 70. So far, so good…I feel just the same as always.

My husband came up, of course, and took me for a drive around the countryside. We saw the huge flock of sheep that mows the large fields all around this area. Some horses that could have been wild mustangs and fields full of wild mustard and poppies. Spring came late here; usually you see poppies in May. It was so much fun for me to just get out -- it has been about a month. I know my husband wanted to either cook something special for me or take me out for dinner, but I could see how very tired he was, so I suggested we just pick up a pizza. I could tell he was relieved. We got a Little Caesar's pizza with extra anjovis that we both enjoyed.

After that, we had this: 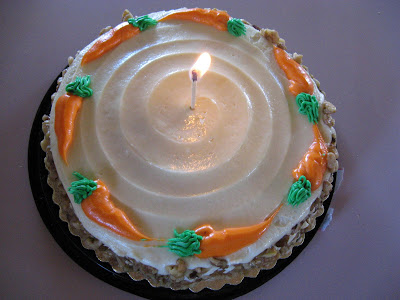 with ice cream. In Sweden, even birthdays, 50, 60, and so on, are celebrated in a huge way, but this one was just what I wanted and needed. Quality time with someone I love, simple time, spent together. I loved every minute of it.

Tuesday: We went to town in the morning and stocked up on food and supplies for me. When we came home, this darling boy 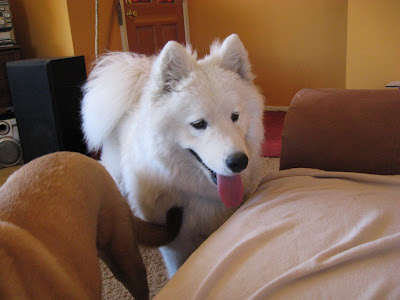 had not only pooped in the house, he had dragged out a box of classical CDs and chewed up a Pavarotti boxed set, where he destroyed the first CD, that included some of my favorite arias from Verdi operas. Then he also demolished one of my favorite CDs with music by Erik Satie. There was that hard plastic with sharp edges everywhere and one couldn't help but wonder how much of it was in his stomach. So I fed him a lot of soft bread and I think he will be OK.

They went back to LA late last night, so a short, but heartwarming, visit that I will treasure for ever.
Posted by Inger at 5:27 PM