While On The Subject

of reptiles, let me tell you about my experience with the snakes in our canyon.
But first, some of you had questions about the rattlesnake vaccine earlier. For some concise information about the vaccine, click on this link: http://www.rattlesnakevaccines.com/
Before we moved in up here, my husband built a fenced area for the dogs and put up a mesh that he thought was small enough to prevent snakes from entering (I'm not sure if it was ½ or ¼ inch). He proudly called it his snake-proof fence. And when we arrived here with all the dogs, what's the first thing we find inside the snake-proof fence? Yup, a snake – albeit a very skinny racer snake. It got in, caught a mouse, got a thick girth and couldn't get out. We teased my husband about his snake-proof fence for the next year but, since the snake was so skinny and not poisonous, we weren't really concerned.
This is Bandit. He passed away in June 2008 at the age of 14. Bandit was that once in a lifetime dog for my husband and me. It still hurts too much, but I hope some day to write his story. 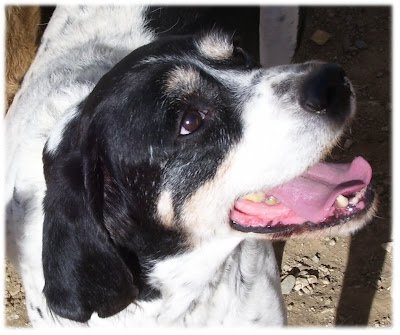 One summer night in 2007, I let the dogs out in their enclosed area. And there it was -- a baby rattlesnake! Bandit, who would kill any critter that got in his yard, got to it first and the snake bit him inside his mouth. I thought I had grabbed Bandit in time, so I put the dogs in the house, got my shovel and moved the snake way down a hill and left it under a juniper tree. When I came back, I realized that Bandit had been bitten. I remembered that the vet suggested giving the dogs Benadryl before they got their rattlesnake vaccines. So I managed to get several capsules in him. Of course this happened on a Saturday, as most of Bandit's crazy mishaps did. The closest emergency vet is 50 miles away, so I called Tracy, a herpetologist, I had just met. And she was wonderful, she stayed with me on the phone, calmed me down, told me what to expect, and as the night went on, it became clear that Bandit would be a very sick dog, but that he would make it.
Bandit ended up looking like a bloodhound that had been hit by a truck. He was bitten inside his mouth, but fortunately not on his tongue. I took him to the vet that Monday and the consensus was that the vaccine really worked and that I did the right thing in giving him Benadryl. The vet told me that's the first thing they use treat snake bites and I think he said you can give as many as six at a time to a 70 lb dog. So Bandit survived his snake bite and lived another year, something we are very grateful for. And for many, many weeks he was looking for that snake to get his revenge!
Needless to say, my husband sprung into action and spent a weekend adding a smaller mesh over the one already there, making sure it went both into the ground and up high. Since then we've had no more snakes in the enclosure. But last summer, Princess and I rounded the corner of our house and encountered a very large rattlesnake right outside our bedroom window. Princess ran up to sniff it, as dogs do, but managed to duck and get out of the way as the snake struck. That was a very close call and I had no idea Princess could move as fast as she did.

Our canyon is home to this species: 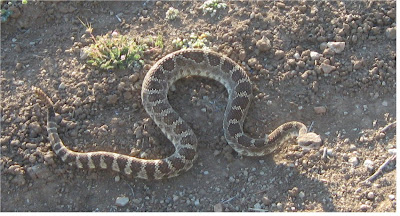 The Northern Pacific Rattlesnake.
Some say we also may come across the Mojave rattlesnake, but according to Tracy, they don't come up to this altitude.
I see two or three rattlesnakes each year, usually in May and June, before it gets really hot. For the rest of the summer, they are primarily nocturnal. To be on the safe side, I make sure my dogs get vaccinated every spring. Because of my accident, only Princess got her shot this year. I don't know when or how the rest of them will be able to go to the vet. Since I can't walk them, they are safe for now. Bored but safe – ah, a dog's life.
In the summer of 2008 we found this guy, digesting his dinner underneath some boards by our shed. 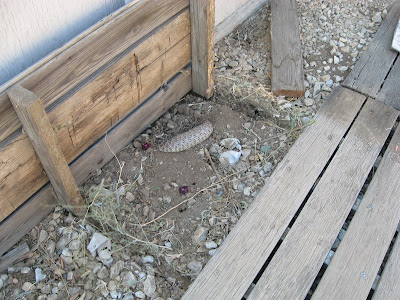 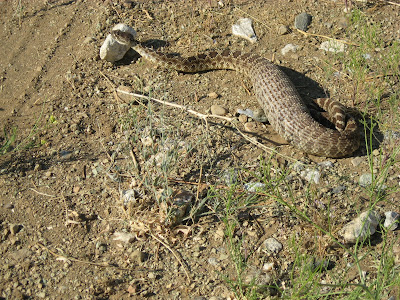 This poor snake just wanted to be left alone and was very sluggish because of what he just ate. Check out that small head – isn't it amazing that they can unhinge their jaws and swallow something this large: 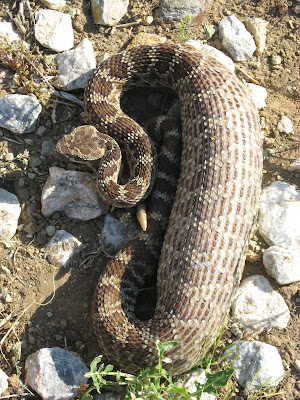 This picture is pretty gross, but I think interesting too. This photo and the one below should be rotated. I wish Blogger would figure out a way, because both are fine in my photo program. 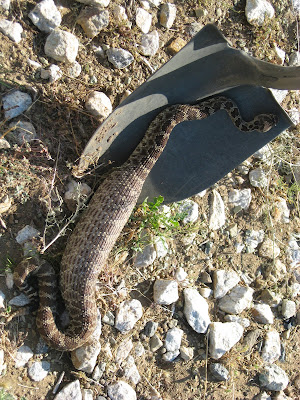 My husband got the shovel out and moved the snake up the hill without incident. Definitely a better removal method than this one from another encounter. Yes, I wondered what my husband was thinking (snake whisperer/charmer?!), but it worked out OK in the end.
This is the road runner, my favorite bird in the canyon, and another defense against snake bites. They like to eat them! Can you see the snake in his beak? 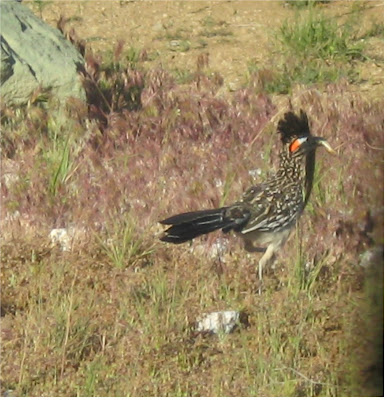 They are great snake catchers and I read that they can kill a rattlesnake by banging the snake's head against a rock, often working in pairs to accomplish this.

And now I promise no more posts about reptiles for a while.

Finally, I would like to welcome new followers to my blog: Sandra, Granny, Tina, and ChickenUnderwear
Posted by Inger at 11:31 AM