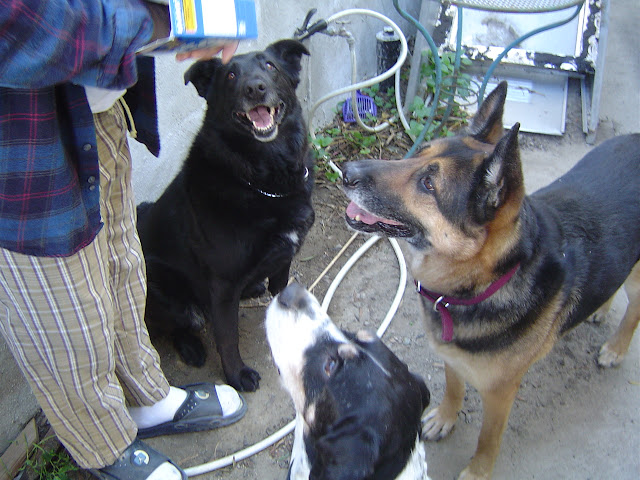 We bought this place in 2005 and my husband lived here on and off for a year, fixing it up. We moved our furniture in June 2006 and then, finally, on September 6, 2006, I moved up here with my crew of three dogs: Bandit, the hound dog mix, Angel, the German shepherd dog, Princess, the Border Collie/Black Lab cross, Sindbad, the cat, and Pippi Birdie, the parakeet.

Looking back, this was the best matched dog pack we've had since we had Gypsy and Red, the Dobermans we lived with early in our marriage. Everyone got along, Angel was the alpha dog, but Bandit though HE was, and she let him. In her own quiet way, Princess took care of everyone, made sure no one strayed. 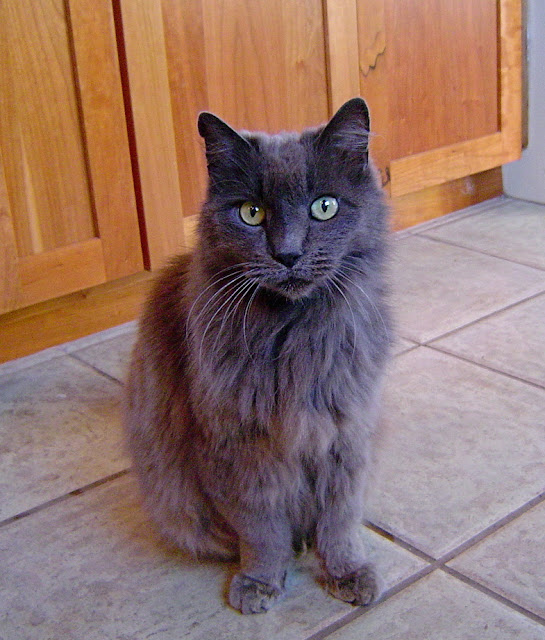 Sindbad, the cat, the great love of my life, moved with us also. He was eighteen years old here and I could feel how he didn't like to move away from the familiar territory he had ruled for so many years. He died at Christmas that year, but he will live in my heart always.

Angel was so sweet, I love this picture of her and Sindbad. Any animal we brought into her life, she would take care of. She would have been a wonderful mother. 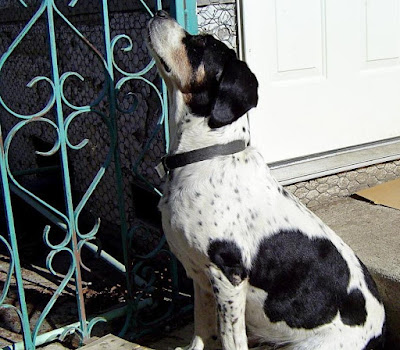 Bandit keeping an eye on a squirrel in our tree in Los Angeles. Unfortunately, the pictures from when we arrived at the ranch are in my broken computer. Bandit loved it here, there were so many things for him to chase and so many smells to smell. He was in hound dog heaven. 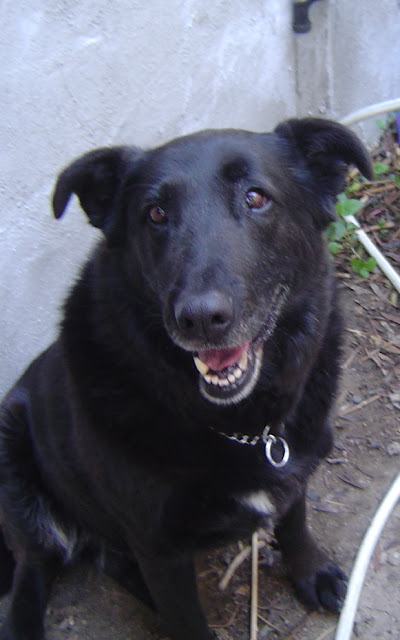 Princess was a true country dog who was always at my side. She was the kindest and most helpful dog I have ever known. But they were all wonderful dogs and so great together. 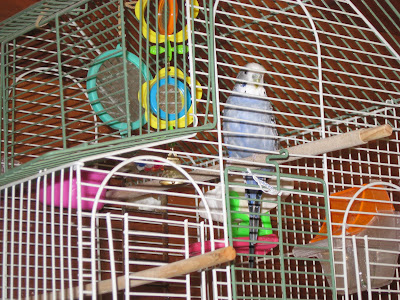 Pippi Birdie was the final member of our crew that moved to the canyon with me. I don't like caged birds, or the idea of them I should say, but my hubby rescued another parakeet from the L. A. streets and we got Pippi as a companion for her. It didn't take long for this little bundle of bird personality to win my heart.

Summer/Fall 2007 ~ I meet Soldier for the first time and fall head over heels in love!

I don't remember exactly when my husband rescued Soldier, sometime in the late summer of 2007. They were both living in our Los Angeles house then because my husband still had his business and worked. I will never forget the first time I met Soldier. I drove down there to meet him and I fell in love on the spot. I sensed how needy he was and he still is.  After he moved up here in 2008, it didn't take long for him to become my 77 pound lap dog. He is 12 years old now and in this past year he was severely injured and has gone through a lot. But his previous owners named him well, like a true soldier he marches on. In addition to loving him so very much, I have come to admire his courage this past year. 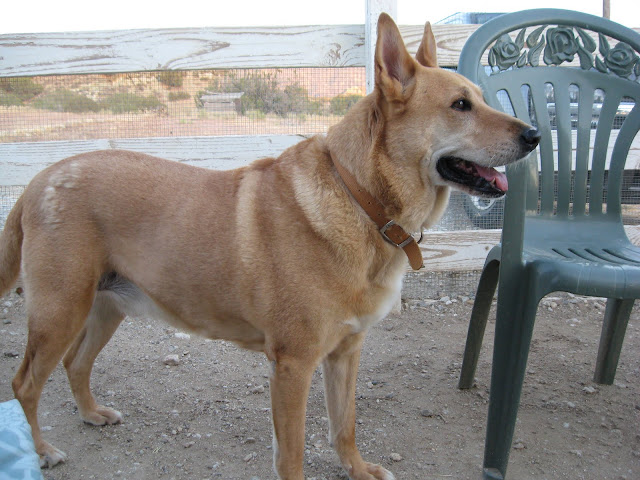 My blog had its third birthday on August 14, 2012. Lately, I have seen people saying Happy Birthday to their blogs, so I will too. I also want to thank my friends, early supporters, and Barbee, my first blogger friend for their encouragement.

I had no idea what I was doing back then, but I slowly began to make friends, new worlds opened up for me, I learned about many new things, both from reading blogs and from doing research for my own posts. I met many cute dogs, cats, and every kind of barnyard critter. I have enjoyed gorgeous photographs from all over the world: fences in Texas, barns in Wisconsin, nature from Norway to Namibia, and flowers from Florida to Alaska; it's amazing how blogging has opened up my mind and my world.

While I completed the A to Z Challenge of 2011, I met many authors and others who love books as much as I do. It has been interesting to read about the hard work, difficulties, frustrations, and joys involved in writing, editing, and getting a book published. I also began to write book reviews for amazon and for my blog. A new experience for me. 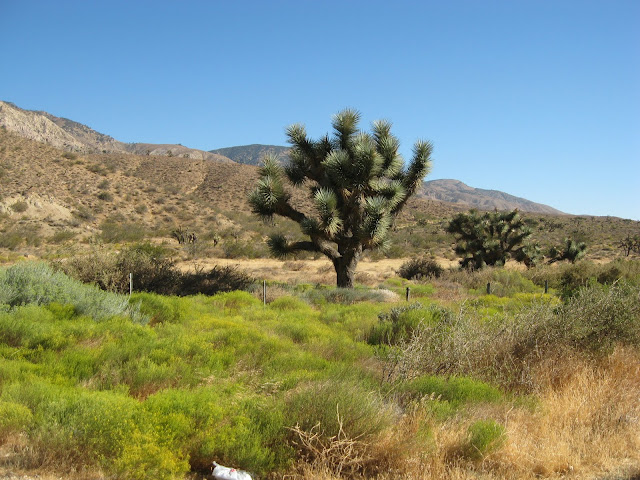 Blogging has opened my eyes to nature. I have always loved nature, but I see things now that I would not have noticed before. I have become a recorder and reporter of things that happen out there in the canyon or on the road. Point and shoot photography has become a hobby of mine. I say point and shoot, because nature just sort of displays itself, I point my camera, shoot, and hope for the best. All the while enjoying myself tremendously. 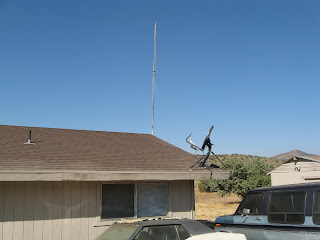 Last Monday was the big day: the Wild Blue satellite arrived and was installed by two guys from Gilroy. They were pretty efficient and got everything working for me. So now that I have high-speed Internet, the time has come for me to finally start my blog. I have discussed this with Princess to see how she feels about having her own Dog Blog and she seems excited about it. You know I'll need a partner in crime and some help with all these new things.