After the Rain ~ An Update From the Canyon 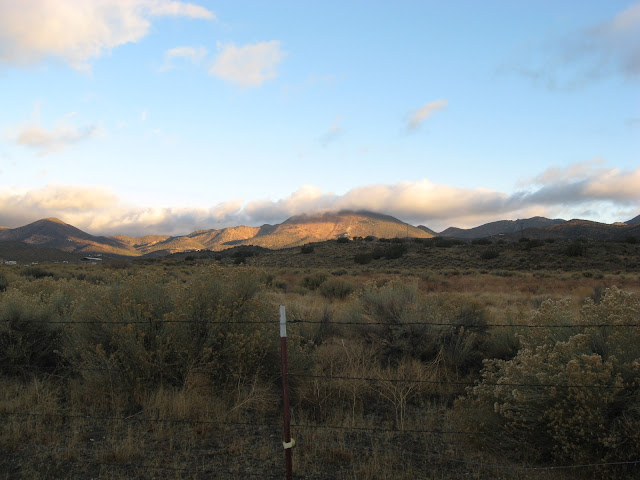 Soldier was in a lot of pain Saturday night, so after I woke up around 2:30 in the morning I gave him a pain pill and sat with him until he quieted down and went to sleep. After that, there was no way I could go back to sleep. So after lunch, I slept the afternoon away on the couch. No one got to walk because it rained. A pretty good rain and the first rain of any substance this fall. 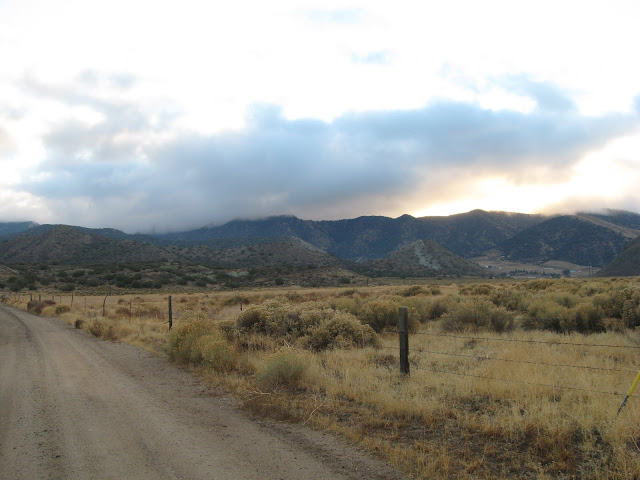 I woke up late this morning, 5:30, and had to rush to get Samson out before the sun came over the mountains. He got his goggles, doggles, but my husband has to put them on the first time and make the adjustments. I will share pictures as soon as he does that. However, there was this big cloud over the eastern range, so I didn't have to worry about Samson's eyes. The first picture above shows the reflections of the sun on the mountains to the northwest. The second shows the clouds to the east. 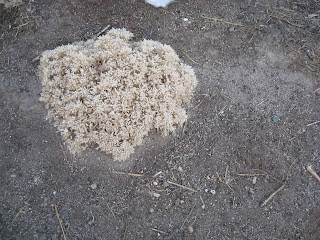 This is a strange looking weed that grows close to the ground. It was green in the summer, now it's this color. It's the only one of its kind around here. The fields turned a dark brown color from the rain and it smelled lovely from the wet earth. 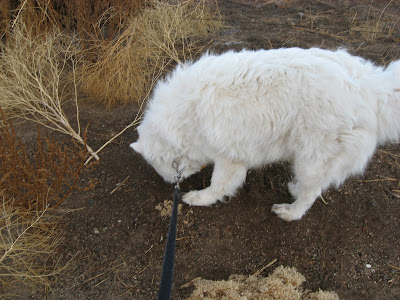 Samson was happy because this was also some good earth for digging and smelling stuff. His paws didn't stay white for long. 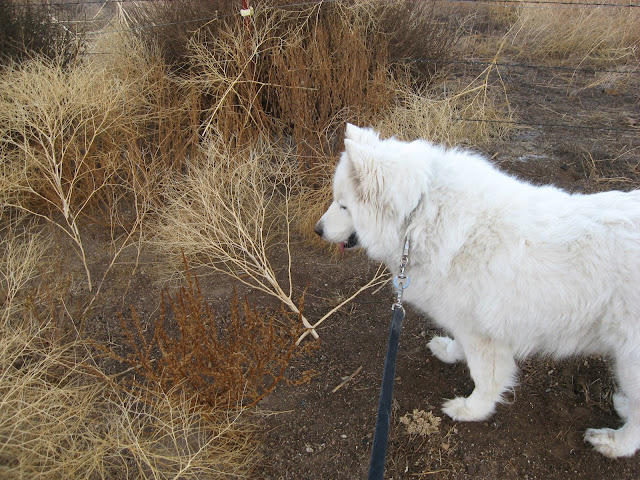 Samson is doing well. He is not as thirsty as he was and is now able to control his bladder again. He is still enormously hungry. I feed him twice a day, but it doesn't seem to help that much. He's on one prednisone every other day and eye drops twice a day. We're going to the vet on Tuesday and I will check to see if he can snack on some veggies, like carrots, which someone suggested, or what else I can do for him. He's not allowed any people food because of his pancreas problems, but maybe veggies are OK. 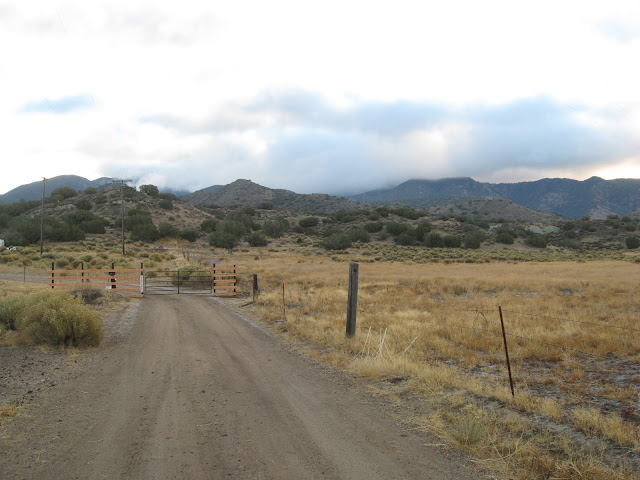 My husband made a gate of a part of a fence and then built a nice surround for it. He just finished it and it looks good. He will paint it later. Soldier, who is a road dog, got mad at it. He just marches on and doesn't pay attention and, suddenly, he was stopped by this contraption. It did not go over well at all. And it was so funny to see his reaction. 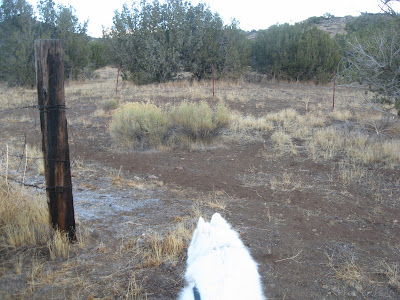 So now we have to go through a gap in the barbed wire fence in order to get in and out. I could unlock the gate and open it, but that seems like too much work. So here we are on the way to the barn. You can see there was a little frost on the ground. But it wasn't cold, just a cold wind blew early this morning. 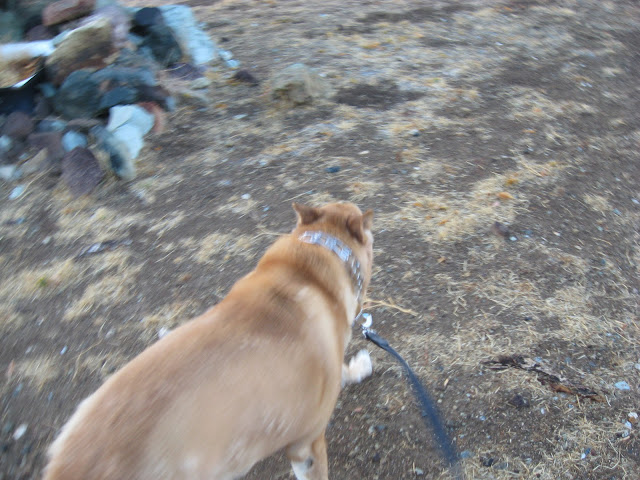 I couldn't believe Soldier this morning, he was so full of joy! He took off running, tried to get out of his collar (he can get out of any collar, except this contraption he has to wear). Once he get loose, he takes off for the hills. This dog marches to his own drummer, that's for sure. 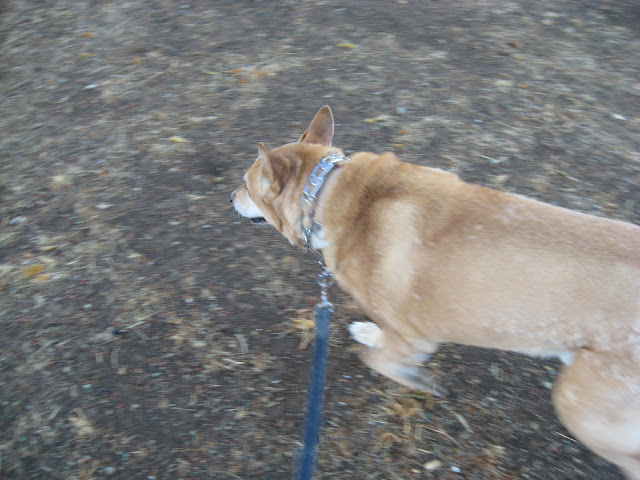 Those extra pain pills really worked. He went from being in a lot of pain and barely able to get up yesterday to running around like this today. 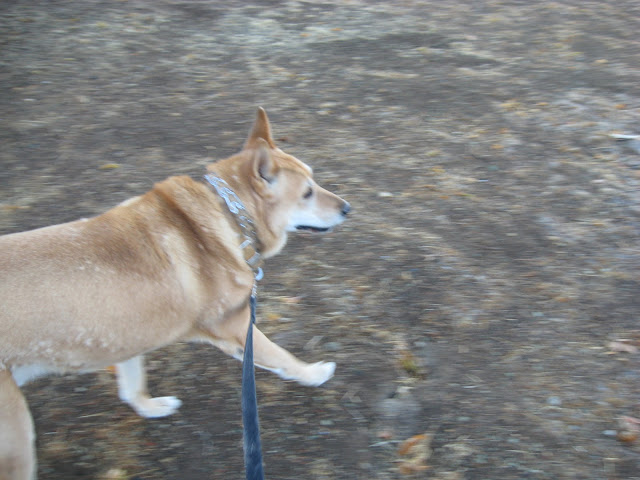 Seeing him running this morning was such a joy. He will be 13 next year, so he's an old dog, but he's tough and courageous. Soldier doesn't stay down for long. 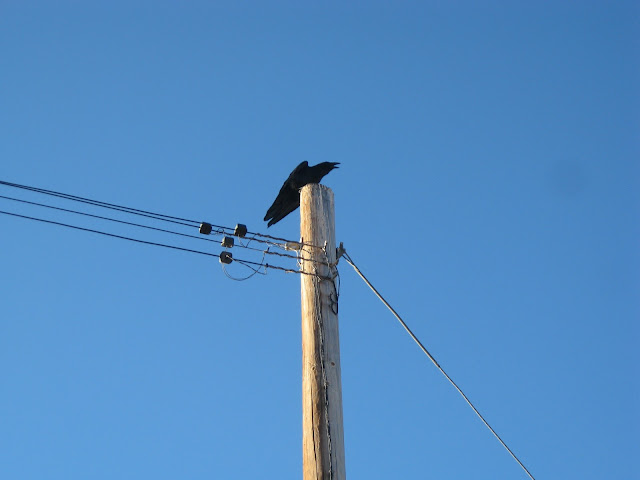 The ravens are very active here in the early mornings and watch us when were're out for our walks.

Other than that, I went to the diabetes meeting Thursday; we talked about supplements. Then I have been working on cleaning up contents of boxes and I've now finished the office. Next we have to work on the kitchen and get it organized. It was simple and organized when my husband lived in L. A. with his business stuff and personal mail, etc., and I lived here. Then he moved up here with everything!!! This house it just too small, there's no room for stuff, so you have to purge. He procrastinates on this. Hopefully, I'm an inspiration. Trying to be, anyway.

And today, I finally cut down the last gray rabbit brush bush in my field. Now I have to put away about 10 of the bushes in plastic bags and take them to the dump. I have to wear my rain poncho because the burrs stick to everything. These bushes are out for revenge!

Have a nice day, everyone.