Manhunt In The Mountains

not too far from here. 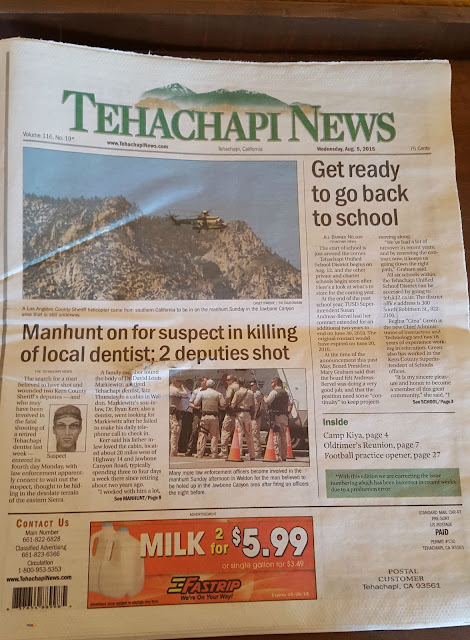 This raises the question: To own or not to own? A fully functioning gun that an old lady like myself can handle.

I have guns here that I can't even lift and were I to attempt to shoot someone, I would fall flat on my behind. That is if I had cleaned them, practised, and had some bullets around. Oh, Harry, I know you must wonder: What!!! She lives in the mountains, isolated, and she doesn't have a gun?

This is what happened: This man kidnapped three guys and held them for some time. They escaped and reported him. Then he moved on to Jaw Bone Canyon, a canyon sort of behind ours, behind mountains, where he entered a cabin and killed a retired dentist from our town, Tehachapi.

A week ago Saturday, he en encountered two law enforcement officers, shot and injured them, and got away. Since then they are focusing the search on a five square-mile area, around where the deputies were shot. Not close to here, but he has not been found.

Today is day 13 in the manhunt. According to local TV news, there are 18 agencies involved, including The U.S. Marshals, and police, sheriffs, swat teams, fire departments, and so on from all over California. The mountains are rugged, there are caves, old mines, and rocky terrain. Because they can't find him, they think he may be a mountain man, a survivalist, or that someone is helping him. He may be dead too, of course. It's hot and dry out there.

Three local schools are closed and so is a portion of the Pacific Crest Trail. And I saw an amazing piece on TV of a lovely spiritual retreat where the guests had been evacuated, but where young men, long-haired and sort of hippie looking, were patrolling the grounds with rifles.

Now you know I don't scare easily. I lived alone here for four and a half years before Errol moved up in 2011. At that time, I didn't even have a gate. For my protection then, I had four large dogs, including a German shepherd and a German shepherd cross. I also live at the end of a very long road. Most burglars prefer a fast exit and that I can't provide. So I have never felt unsafe here and certainly not afraid. But now we're not talking burglars, not talking someone coming from the road, in a car, but rather someone armed and dangerous coming across the wilderness that surrounds me.

Are you scared yet?!

But I have Samson and Faith. Samson is an excellent guard dog. I can trust him to alert to anything or anyone moving outside. He will bark, except for bears. Don't ask me why. I don't know what else he would do. Faith would kill, if she could. But she's small and most likely will not scare anyone. Giving her the advantage of surprise. I believe there may be a pit bull in there somewhere in her DNA.

So even if they find this guy, I feel more concerned about my safety than I ever have since I moved here. It is, of course, so much safer than living in Los Angeles, where I reported an intruder once (dogs alerted) and it took the police 45 minutes to show up. Oh, well.....

So, to be or not to be a gun owner? When I lived in the mountains of New Jersey, well, hills, I guess they were, we had a lot of guns. My first husband had escaped from communist Hungary, and once he became a citizen, first thing he did was arm himself. Just because he could. And I learned to use them. So I'm not a stranger to guns, just don't really want to own one.

Please send good thought out to all the agencies looking for this dude. I feel tension in my body and mind and really wish they would find him. Soon.....