Rachael's Band Gives A Summer Concert In The Park 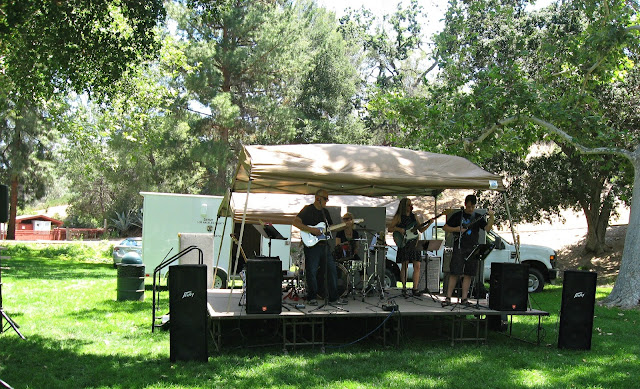 On Saturday, Mary and I set out for William S. Hart park, the place where Rachael works, and where she and BaCoRaDo, the band she performs with, were giving a summer concert. 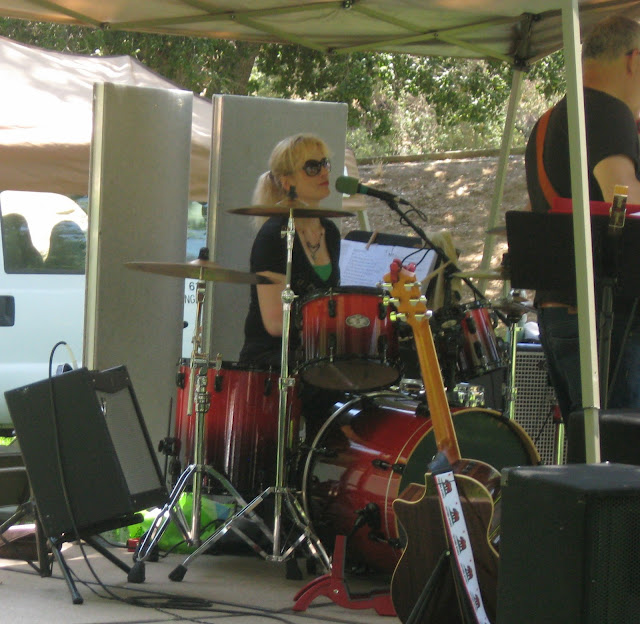 I had never heard Rachael perform with this band nor had I heard her on the drums. Music is one of the most important aspects of Rachael's life and it was so much fun to see this side of her. She sang beautifully. I wanted to capture some of it on my phone, but since I never use the video, I messed it up a bit. 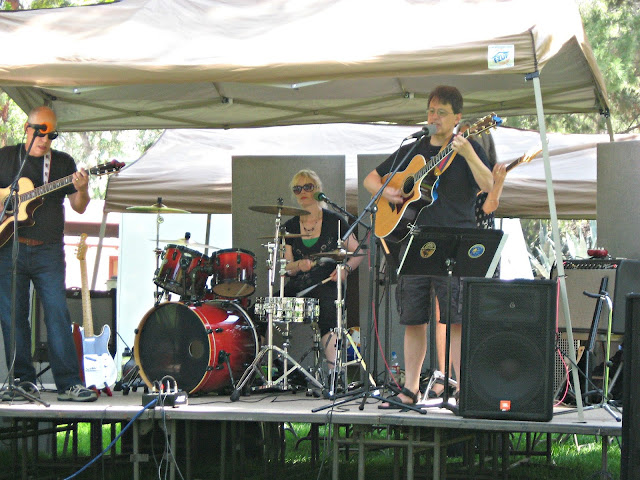 The first part came out great on my phone, but the file was too large to upload. The second part didn't save. I have no idea why. I learned a lot from this, and will practise using the video so I can use it properly in the future. The dogs should be good, never boring, subjects. 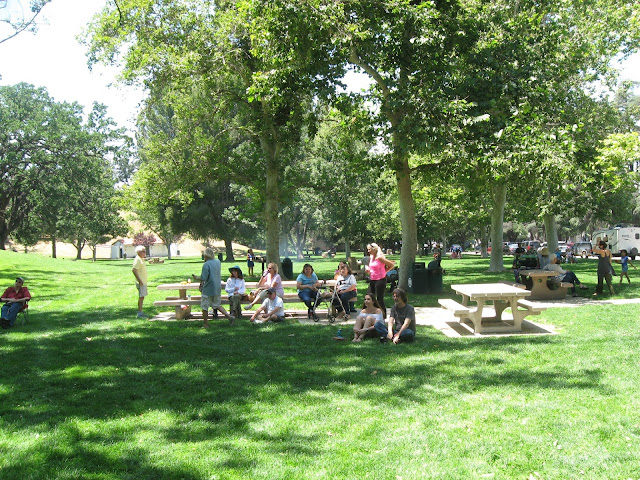 Here are some pictures of people enjoying the music. Doesn't the grass look incredible?  The lawns were full of clover and clover blossoms, tiny white ones. I haven't seen anything like it since I was in Sweden last. Just a lovely, lovely place. 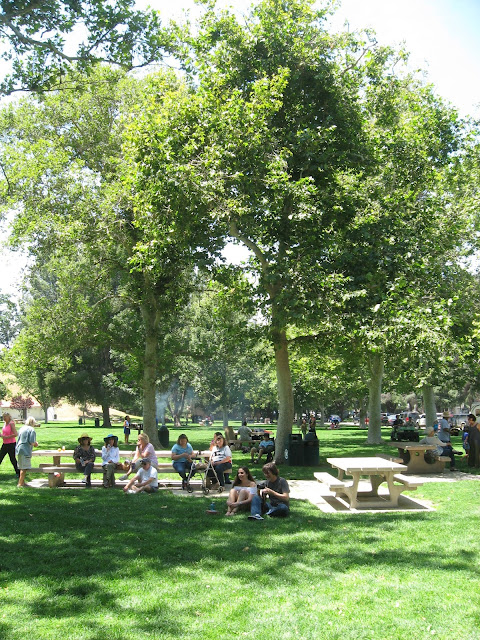 The park was donated to Los Angeles County by William S. Hart, who was a cowboy actor in the early days of film. He built his home here, surrounded by many acres with gorgeous views. 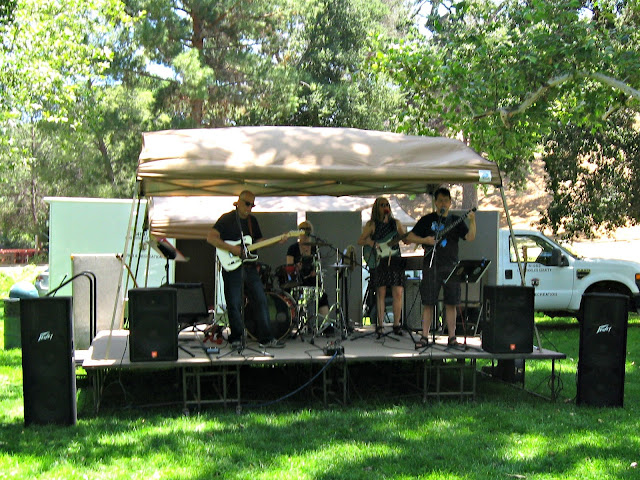 Mary and I enjoyed the variety of the music: classic rock, some blues, some country, and original songs written by the two guys in the band - two very talented men. I loved the women singing, the guys singing, and also all four of them singing harmonies. I'm so sorry I didn't capture more on my phone, but lesson learned. 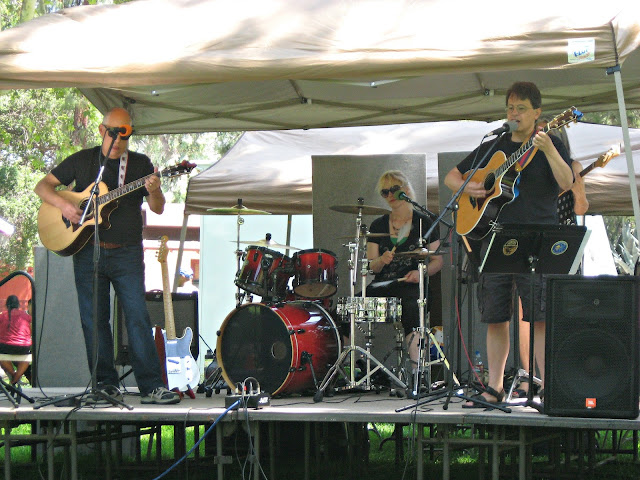 Mary and I didn't see the alpacas or any of the barnyard animals. We will save that for another, hopefully, cooler day when Rachael can give us a tour. At that time, we'll also check out the Hart's home, which is a museum now. Since he was a cowboy star, I know Mary will enjoy the tour a lot. She really likes her cowboys. 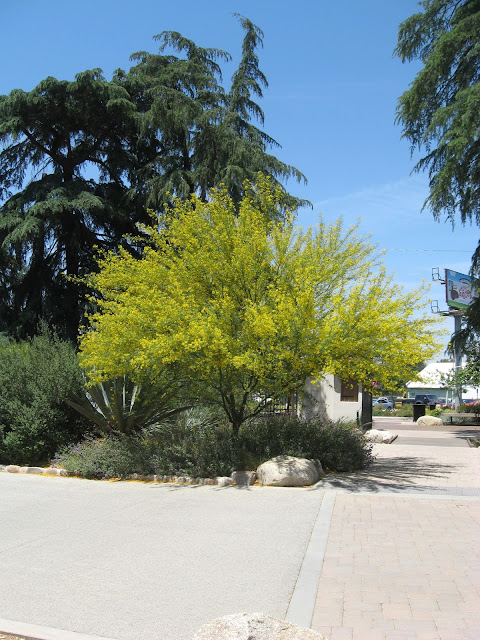 I met a few of Rachael's friends that I hadn't seen since our donkey rescue days, about 10 years ago. And my friend Carole from UCLA came by also. It was great to see her again. Both Mary and I enjoyed the music and the pretty surroundings. It was so relaxing and just so nice.  Rachael and the band were really good. I hope they will do this again, it was a lot of fun.