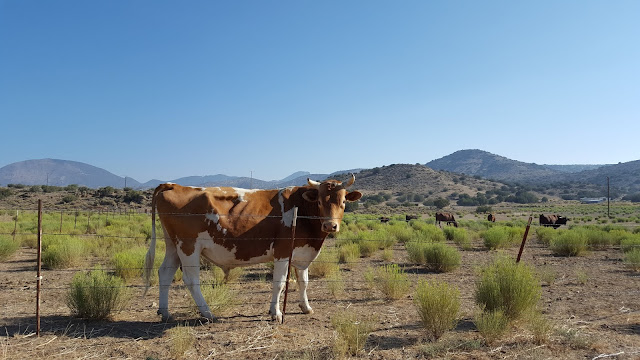 The sweet Guernsey bull greeted me as I drove down our road, back from the dump. Glenn has helped me with the trash for many months now, so it  felt good to be back doing things for myself. My friend Benny, he was friendly with Errol and has been very kind to me, was there and helped me unload the Jeep.


As you can see, the air is pretty clear. 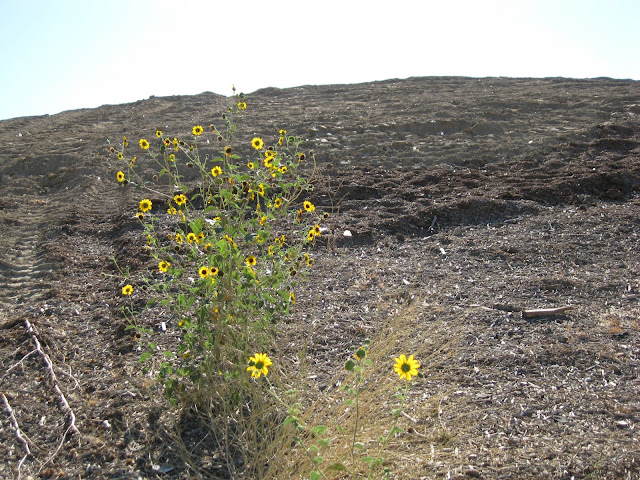 Wild sunflowers grow all around the dump. I have been looking at the early days of my blog and found this picture. It looked just the same today. I started my blog in August 2009 and it has been interesting to go back in time and see how both my blog and I have developed. 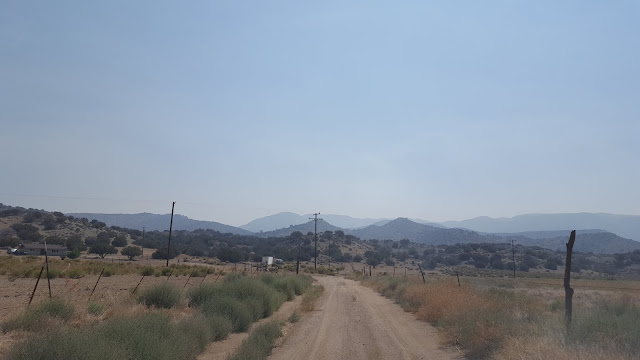 I took these pictures Tuesday, after I had been to town where it was very smoky. As I drove down our road, I noticed for the first time all the Russian thistles lining the road. 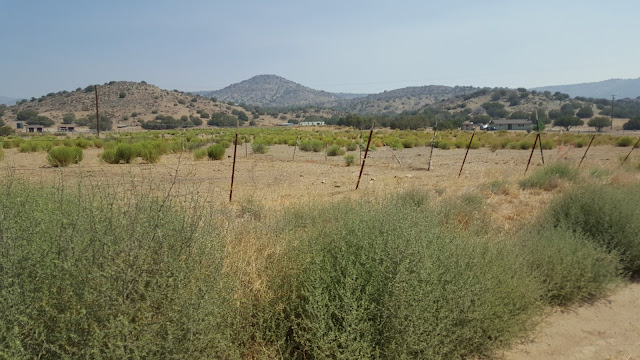 I hadn't noticed them before, so to me it looked like they had just sprung up overnight. Then, today, as I drove home from the dump, I noticed that the canyon road was framed on both sides by these bushes. And all of them will turn into giant tumble weeds later in the year. 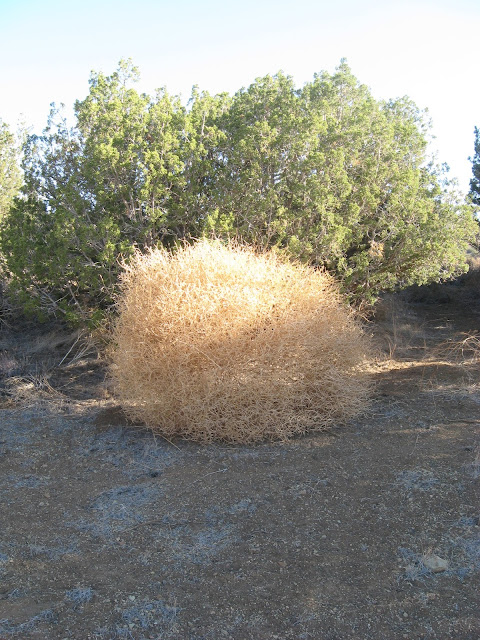 Like this one that attcked me from behind and really scared me back in 2013.


The ones in our road will blow down to my gate, where they will stop. Looks like I will have my work cut out for me, trying to get out of here. 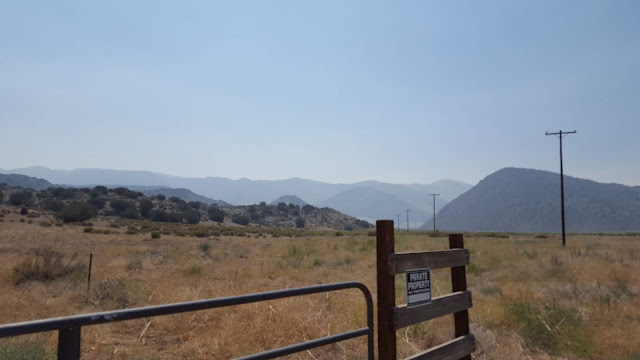 You can see the haze in this picture too. It's impossible to imagine what it must be like in northern California. My lungs got messed up from fires here in 2012. The Jaw Bone Canyon fire lasted a long time, but it was nothing like what's going on up north now. Firefighters will be my heroes forever. 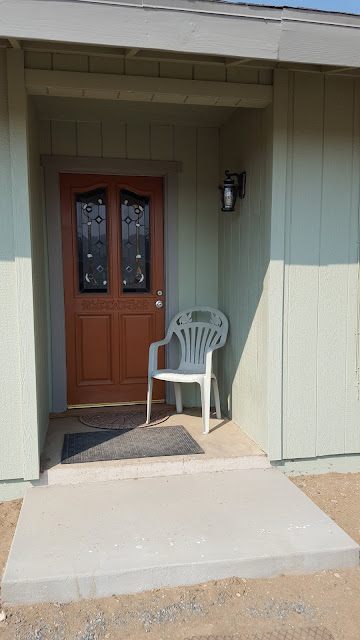 Yesterday, I had Mary over for a smorgasbord lunch. Followed by ice cream, which Mary loves. It was nice to visit and catch up. It feels so good to have friends over now that my house is almost together. 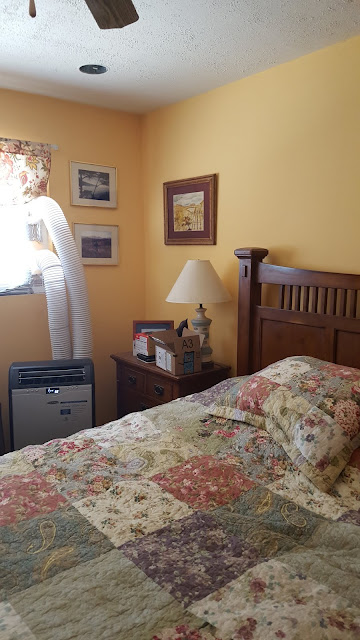 Then I went to bed early because I have AC in the bedroom and the house was hot. I heard Faith barking, but Samson was quiet, which is unusual. Then he came in and sort of beckoned me to go outside. Faith was by the fence with her head down, barking. I knew it was a snake and hoped it would be either small or not a rattler. Well, it was the biggest rattlesnake I've ever seen. 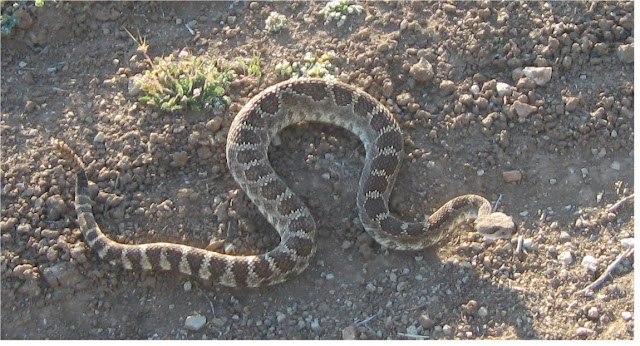 It was similar to this one, also from 2013, but longer and thicker and younger too, as it didn't have as many rattlers.

Long story that ended with the snake going under the rocks that surround this bathtub that people who lived here before used as a flower pot. Snakes that need a place to rest, undisturbed, always crawl in there. So it's either still there or gone and I will probably never know.

I wish I could get rid of that contraption, but with big rocks and a bathtub full of dirt, it would be a big and - tractor required - job.

Good thing the snake is large and easily seen. And we are being careful. The dogrun has  quarter-inch wire about half-way up and is secure that way, but snakes climb in anyway. As a rule, rattlesnakes don't.

I'm happy that Samson, who cannot be vaccinated with the snake vaccine because of his illnesses, didn't want to challenge the snake or take it on in any way. He went to get his mommy which was such a smart thing to do. 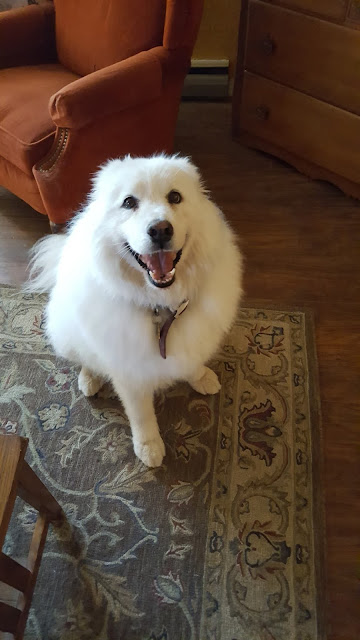