And then there was Bandit. After I named him, I would have moments of regret as he lived up to his name, but then he would charm me all over again.

Of all our dogs, Bandit was the one providing constant entertainment, always up to something, a dog so full of life, such a character, so smart, so much fun, just a wonderful, wonderful dog.

Errol found him in a Home Depot type box store in the mid-1990s.  When Errol asked about the dog, the store clerks told him they thought he had been dumped there. They would put him outside and the dog would return as soon as he could and keep running around the store looking for someone.

Errol was tempted, but left the store. After he had loaded up the van and was about to drive away, he noticed the dog resting in the shade under a huge tractor trailer truck.  So, of course, he had to rescue him and bring him home. 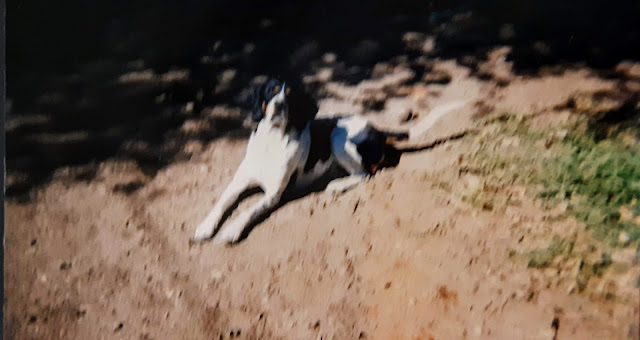 Bandit was just a puppy. I took one look at his face with a black mask perfectly placed around his eyes and ears and I named him Bandit. For his long life with us, he would  live up to his name, particularly after Angel, his partner in crime, arrived a few years later.

The first thing he did after he arrived was to save us from a fire. We lived in the house I bought in Pasadena at the time. An old wooden house. Our neighbors were away, burglars came and, as they left, set our neighbors' house on fire. Only a driveway separated our house from theirs. We were asleep, when Bandit jumped on the bed, onto Errol's chest and woke him up.

So now he was our Hero, but still a Bandit at heart.

He was a hound dog through and through, not a pure bred one, but his nose was to the ground, always.

Bandit loved to eat and would do any trick I taught him to get a snack. That dog knew more tricks. What a fun dog he was.

While still young, he got in trouble with a raccoon, but saw the danger and escaped without serious injuries.

Bandit was still with us when we moved here. He ran loose and with us as we walked our dogs in the hills. We clearly should not have let him as he was getting deaf in his old age.

One winter's day, as we were hiking with him and our two  other dogs, he disappeared. In the blink of an eye, he was nowhere in sight. He was gone and would not have survived a cold winter's night. Our black lab/border collie rescued him and I will leave that story for her post. She was the true hero that day.

Bandit watches as bats fly by.

I loved this dog so much I wrote a silly book of badly executed poems about him. Only thing they had going for them was that they rhymed and absolutely told his story. Perfectly! 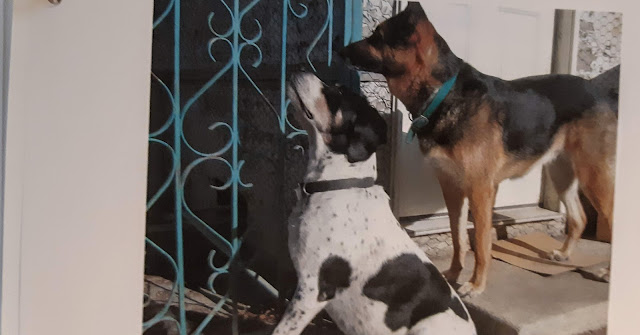 This goes on for page after page and as I read it now, it's all about my love for this amazing dog.

As he aged, he got Cushing's disease and in the end his liver gave out.

The day Bandit died was one of the saddest of our lives. I worked at the donkey rescue at the time and one of the staff there euthanized him here in our yard. Errol held him while I went behind the shed and cried my eyes out.

He was around fourteen years old, so he lived a long and good life with us.

I still miss this amazing dog and his sister Angel. What a wonderful pair they were. I will tell her story next month.

My name is Bandit and I heard that my dad
Found a new dog, a black female Lab
Should I be glad or should I be sad
On the one hand she adds to my pack
On the other she may steal my snack
But one thing I know to be true
And because of this I can't be blue
Daddy he loves me as much as before
And I am his doggie for ever more.

Sorry about that, I just had to add one more. I can't help it, I just loved this dog so very much.