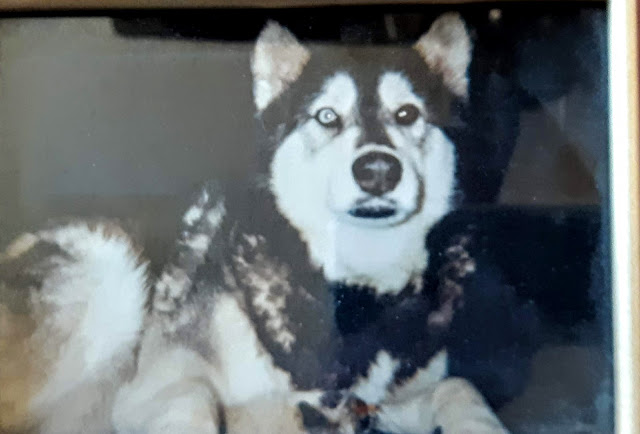 I heard this story from Errol and Glenn:

Errol, Glenn and one or two other guys were on a lunch break somewhere in South Los Angeles, maybe not in the best of neighborhoods. Dogs can be found running loose there, sometimes strays, other times lost, or perhaps just let out by their owners to run around for a while. Tough dogs who know how to get back home.

As they drove down Figueroa Street, or some other wide street with several lanes of traffic, they noticed a dog making attempts to cross. A dangerous endeavor, so Errol stopped the van, got out and led the dog across the many lanes of traffic.

Then they drove to some nearby burger place, got their food and sat in the van and ate with the sliding side door open. Suddenly, a familiar furry face appeared in the doorway. The same dog had somehow found them. She was thin, beat up, and very hungry. Of course she got some burger and later that day, Errol brought her home.

He named her something with a spin on South Central Los Angeles, I forget what, but it was shortened to Saschi.

She turned out to be a lovely dog, independent, self-contained, self-reliant, and kind.

Saschi was a Siberian Husky and maybe something else as she was very large. She was injured when she came to us. She had probably been in a dog fight. She was also very thin and malnourished. After some vet care and some good food, Saschi was never thin again.

She lived with us in Pasadena until we sold that house and moved to Errol's house in Los Angeles. She was about five years old when she arrived. She was a good and calm influence on our troubled Doberman, Sundance.

Saschi was a sort of background dog, a dog who didn't make any demands on your time. She was healthy all of her long life, but got arthritis as she aged. Again, her breed was not ideal for city life, she needed to run, she needed cold air and I felt bad for her. But what she needed most of all was love and care and that she got. And you could tell she was grateful for it. She was such a kind and loving dog.

She lived to be sixteen years old. She lived longer than any of our other dogs. Her arthritis got worse as she aged and one night she let out a horrible sound, like a scream. Her pain meds apparently didn't work. I looked at her and I knew. She was old, she was tired, she hurt from her arthritis. She gave me this look of I have lived a good life, I have loved and been loved, now I'm tired.

I've never forgotten that look, she told me she was done. In the morning, I told Errol I would take her to our vet in Altadena and he helped me get her in the van. It was a long drive, I talked to her, told her how much I loved her, and what a very good dog she had always been. Saschi was the first dog I stayed with and held close as she left this life. This was my first time watching someone I loved die. I have never faltered since.