Winter Comes To The Canyon 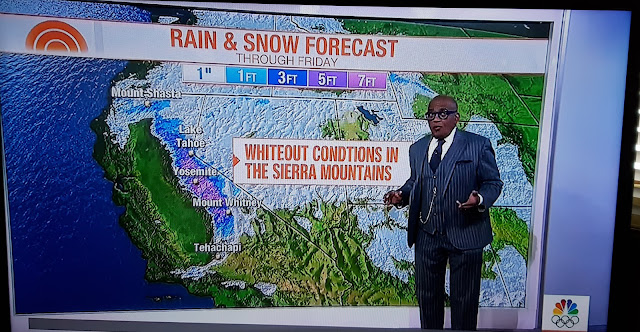 Confirmed when our town shows up on Al Roker's map. A winter storm is coming. Finally!

The first part arrived with cold enough temps to keep the snow from melting for a day or two. And more rain, snow and wind will arrive today. I love it and it's much needed, it's been dry here for so long now.

Instead he decides to run down the road, all the way to the gate.

Not wanting to come back until I rattle the plastic container with a few of his treats. I always bring it when he's on the loose outside. His breed likes to wander.

You can see he's getting tired at the end. But what a joy for me to see him in his own snowy environment.

In lieu of wild critters coming by, Franklin, the Devon bull showed up. This was a surprise since they rarely get out and walk around in the snow.

Joyce said he'd been gone a long time and she had no idea why or where he went. She's very calm about her critters and they always come back home. The only one she's had to chase after is her African tortoise, who is not slow at all.
I said the same thing I say to her dogs when they come by: Go home, Franklin. This he did, so I yelled after him: Good bull!! Just like I praise her dogs.

Samson and Faith are getting a nice rest after playing in the snow.  We all enjoyed our day and the snow is still here, two days later, which is unusual. Right now, on Wednesday, as I write this, very strong winds are howling outside my window and a few snow flurries are dancing through the air.