Winter ~ And Remembering My Sister Ammi 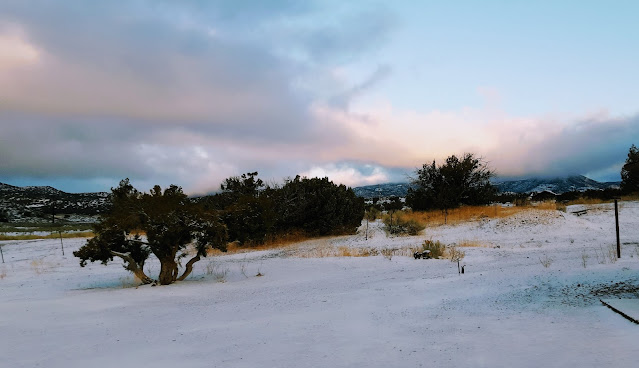 I had to look on my phone to see what day it was. They tend to run together when one lives an unscheduled life. My phone said: Tuesday, March 16, which brought me back to my sister, Anne Marie. She was born on this date in 1947. She was later diagnosed, no the doctors knew from the beginning, but did not tell my parents. Imagine that? Later my mom was told by a doctor that she had the most severe form of Down syndrome. Nothing could be done, and she should be put in some place that cared for children like her.

In 1947, things were very different. Attitudes, blame cast, and so on. Anne Marie's life did not start out well, I don't think. Later though, she was assigned wonderful caregivers and lived a very good life, much loved by those who cared for her. And by my mom and me.

Some day, I may tell her story. She was severely disabled, could not speak, would never, ever look anyone in the eye, and had many other difficulties. But still had, for the most part, that sunny disposition you will find in people with this disability.

But that wasn't what I was going to write today. I just wanted to note that winter came roaring back last night with howling winds and snow flurries. A little was left this morning, but will soon melt.

Have a good day, my friends.