According to Wikipedia, the native population of California before the Spanish arrived, may have been as high as 300,000 divided into more 100 different tribes or nations. Their civilized and disciplined culture, developed over 8,000 years, was not considered by the Spanish, who followed a doctrine established in 1531. This doctrine based the Spanish state's rights over land and persons in the New World on a Papal charge to evangelize the native people. 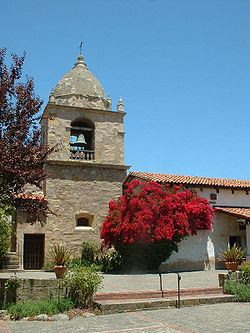 Native Americans, who lived at a mission, had to learn Spanish and vocational skills, in addition to Christian teachings. Once baptized, they were labeled neophytes, or new believers, and were no longer free to leave the mission. They were strictly supervised by the padres who oversaw their labor and ensured they attended daily masses. Indians who decided to leave were considered runaways, and were searched for. In 1806, a total of 20,355 natives were attached to the  missions, the highest number recorded during the California mission period.

Young Indian women had to live in together under the supervision of an older trusted woman, who was responsible for their care and education. The padres felt this was necessary in order to protect the women from the men. Courtship between women and men took place on each side of a barred window, in accordance with Spanish custom. Women were only allowed to leave once they were getting married. Living in these cramped and unsanitary quarters, resulted in the spread of disease and many young women died. 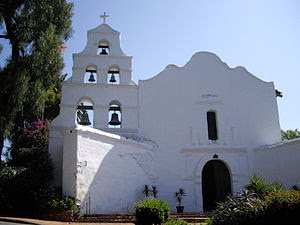 The ringing of the mission bells was a very important part of life at the missions. Novices were instructed in the ritual of ringing the bells, which were rung at mealtimes, to call for work, for church services, for baptisms and deaths, to signal the arrival of a ship, and so on.

Each day began with sunrise Mass and morning prayers, followed by teachings in the Roman Catholic faith. After breakfast, men and women were assigned their daily tasks. Women's tasks consisted of dressmaking, weaving, knitting, embroidering, laundering and cooking. Some of the stronger women, ground flour or carried adobe bricks to the men who were assigned to building tasks. 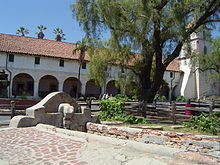 Lavanderia built by Chumash  Indians at Mission Santa Barbara around 1806.

A view of forges at Mission San Juan Capistrano, the oldest existing facilities, (circa 1790s) in California. A sign states it was part of Orange County's first industrial complex.

The missionaries introduced European fruits, vegetables, cattle and horses to the Pacific region. And they also taught the Indian men to farm, to build adobe houses, tan leather hides, shear sheep, weave rugs and clothing from wool, make ropes, soap, paint and so on.

As in other parts of America, the colonization of Alta California came at a heavy price for the native population. Next Sunday, I will write about some of the uprisings and revolts that occurred at the missions.

After that I want to write about my own impressions of the missions that I have visited from San Diego to Santa Barbara. Finally, I plan to use Wikipedia and other online sources to talk about the missions of central and northern California.

As I said in the beginning, I have always been interested in the Spanish Missions of California and I am enjoying learning more about them through this project.