Between 1769 and 1823, the government of Spain, with the assistance of the Church, established a network of missions along what became known as El Camino Real. Mission San Diego de Alcala was the first of the 21 California missions founded by Spanish Catholics of the Franciscan Order.

The 21 California Missions and the Pala sub-mission. From a bookmark of mine.

Purpose of the Missions

The goal of the Spanish was to convert the indigenous peoples of Alta California to Christianity. This had worked reasonably well in their interactions with the native populations in Mexico and Central America. The Spanish realized that their numbers were not enough to successfully occupy and settle the vast land that was Alta California, so they planned to teach the native population Spanish and vocational skills, in order to make them into tax paying citizens. Several missions also served as military outposts that were instrumental in the colonization of the Pacific Coast region.

The first baptisms in Alta California took place after two Fathers en route to Monterey, came across a native settlement where two young girls were dying.  They baptized a baby girl, Maria Magdalena, and the older child, Margarita.  The soldier on the expedition named the place
Los Cristianos.

Building and Maintaining the Missions

Many procedures had to be followed before the founding of a mission was approved. Paperwork that involved months, even years, moved slowly through the Spanish bureaucracy. Once a mission was approved for a certain area, a specific site was chosen. A good water supply was of primary importance, as were wood for fires and building materials , and fields for grazing herds and raising crops. Once a site was chosen, it was blessed by the padres, who then, with the help of their military escorts, began to build temporary shelters that would eventually give way to stone and adobe buildings. 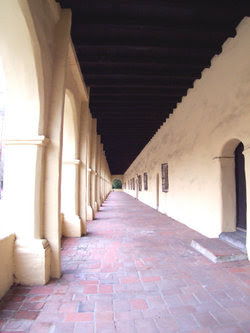 Since it would have been impossible to import the quantity of building materials necessary to build a large mission complex, the fathers had no choice but to use locally available materials. Considering that there was also a lack of skilled laborers, both building methods and materials used had to be simple. The fathers primarily used five basic materials to construct the missions: adobe, timber, stone, brick, and tile. The adobes (mud bricks) were made from soil and water with chaff, straw, or manure added to bind the mixture together. 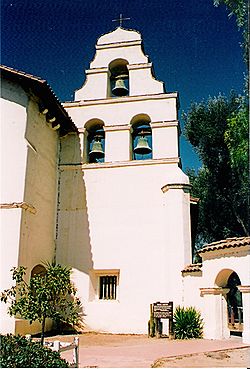 The three-bell campanario ("bell wall") at Mission San Juan Bautista. Two of the bells were salvaged from the original chime, which was destroyed in the 1906 San Francisco earthquake.


Quoting from Wikipedia: "The first priority when beginning a settlement was the location and construction of the church (iglesia). The majority of mission sanctuaries were oriented on a roughly east-west axis to take the best advantage of the sun's position for interior illumination.  Once the spot for the church had been selected, its position was marked and the remainder of the mission complex was laid out. The workshops, kitchens, living quarters, storerooms, and other ancillary chambers were usually grouped in the form a quadrangle, inside which religious celebrations and other festive events often took place."


As I mentioned in Chapter one, the missions were built approximately 30 miles apart along the California Mission Trail, a 600-mile route, which is usually referred to as El Camino Real (Spanish for the Royal Road, also known as The King's Highway). At the time the missions were built, the 30-mile distance represented a long one-day ride on horseback or a three-day hike on foot.

Franciscans of the California missions wore gray robes, not brown as is common today.

It was intended that each mission be turned over to a secular clergy* and that all mission lands be distributed among the native population within ten years after a mission was founded. This policy had worked fairly well for the Spanish in Mexico, Central America, and Peru where the native populations were more advanced than those in Alta California. As time went on, it became evident to Father Serra and other mission administrators that it would take much longer for the California missions to become self-sufficient. The missions never attained complete self-sufficiency and would continue to require financial support, albeit modest, from Spain.

The end of the mission period in California will be covered in a later chapter.

* In the Catholic Church, the secular clergy are ministers, such as deacons and priests, who do not belong to a religious institute. While regular clergy take religious vows of chastity, poverty, and obedience and follow the rule of life of the institute to which they belong, secular clergy do not take vows, and they live in the world (saeculum).

Click on this link to read about the building of the missions in more detail:


Source: Information and all images, except the first, from Wikipedia.