Thank you for your prayers, good thoughts, and most of all for caring about Samson. 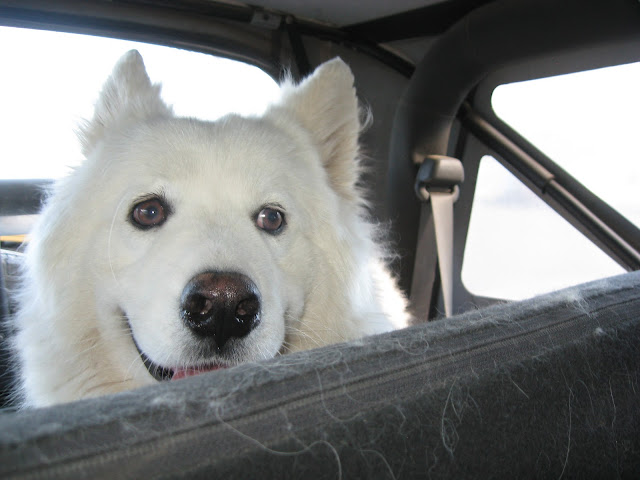 The above picture is from last Wednesday. I haven't wanted to put a flash into his eyes, so I don't have anything more current.

Yesterday, we went back to the vet.....hopeful. While we waited on the bench-seats in the waiting room, Samson sneaks behind my back, walks up to an elderly gentleman who sits by himself in the corner, and gives the man a big lick on his cheek. Fortunately, the man didn't mind. I think he was very worried about his own dog, who was in there for several procedures.

Then we go in the room and Samson is wonderful. They have a bench in there too, which he jumped up on. The vet came in, popped Samson in each eye for glaucoma, then shone various lights into his eyes, while bending his head close to Samson's. While this is going on, Samson sticks out his big tongue and give the vet a huge lick all over his face and mouth.

The verdict, was the best news ever! The vet said Samson has made a remarkable recovery. He said he was terribly worried on the previous Monday. Now, just a week later, he could see Samson's retina, he could see that everything looked fairly normal inside his eyes. Being who I am, I had not dared to hope for this. But there it is, Samson can see! His eyes are a lighter color now and when I asked about it, the vet said it's purely cosmetic. His normal dark brown color may return, but if it doesn't it's OK.

He reduced the eyedrops to twice a day and said we were to use up the other medicines as originally prescribed. He also said -- though it is very rare, some dogs have recovered completely from this syndrome. We will see him again on the 25th. I forgot to ask about the goggles or sunglasses, so I will do that next time. 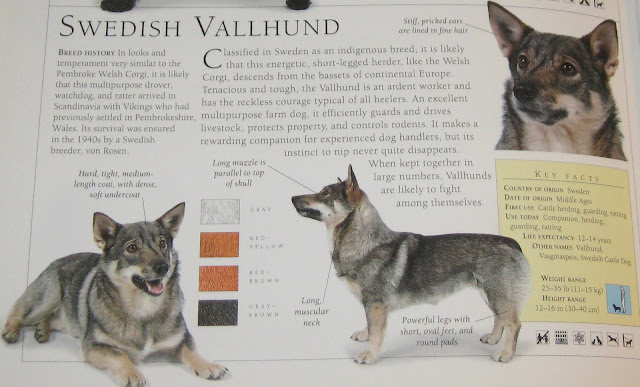 While I was waiting to pay, my hubby, as usual, struck up a conversation with a guy waiting outside with one little dog that looked like a corgi and something else. When I was done, I asked him, and he said it was a Swedish Vallhund. I told him I was Swedish. Right then the man's wife came out with another dog of the same breed, but much smaller.

This little dog laid eyes on Samson and attacked him. They told me this was the female of the pair and she was ferocious! A snarling, teeth-baring, fury of a little dog. Had she not been on a leash, she would have attacked. Samson, sweet as he is, would not had stood for it. But yesterday, Samson hid behind my husband and looked like he wondered what this was all about. -- Why do you have to attack a handsome dog like myself, calm down, will you? --  I looked Samson and said, "that's Swedish bitch for you!" Both Samson and my husband looked taken aback, so I reminded them that bitch is, indeed, the correct word for a female dog. The couple were laughing, but I have no idea what they were thinking, nor did I care, I was just so very happy.

Thank you again for caring about Samson.