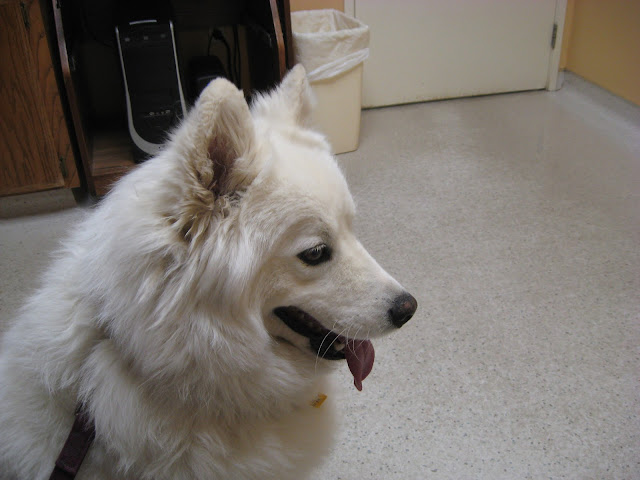 Samson at the Vet

After we left on Monday, our vet researched the syndrome he thought Samson suffered from. He also consulted with a ophthalmology vet and came to the conclusion that he had correctly diagnosed Samson and prescribed the right medication. And of course I went home and googled this and when I saw that another symptom of the syndrome involved depigmentation of skin, I knew the vet was right. Unfortunately, he was right.

This is what Samson has and will have for the rest of his life ~~ I quote here from a website ~ I don't now the name, it doesn't show on the page:

Uveodermatologic Syndrome (UDS) is an immune-mediated canine disease characterized by inflammation of the eye, de-pigmentation of skin and whitening of hair, well, white fur wasn't a clue here, but Samson has been losing pigment on his nose for a while now. Morbidity is related primarily to the eye inflammation, which can result in secondary ophthalmological disorders that lead to blindness. Treatment involves both topical and systemic immunosuppression.

UDS is thought to be caused by the inappropriate production of antibodies directed against pigment-producing cells, although viral infection cannot be ruled out as a cause of the disease. 80% of reported cases of UDS involve Akitas.

So what does this mean for Samson? And for hubby and me, as his mommy and daddy?  For the rest of his life, Samson will need: Eye drops, three times a day. That sounds like a lot of fun! After he finishes this heavy duty dose of antibiotics and prednisone, he will have to be on the lowest possible dose of prednisone for the rest of his life. Considering the horrible side effects of steroid drugs, including getting diabetes, the vet said that there is another drug that can be used in combination with the prednisone to minimize the risk of complications, and, better yet, if side effects are noted, this drug can be used alone. Then, this sweet man, who knows we aren't exactly rolling in money, told us it can be purchased at Costco!! 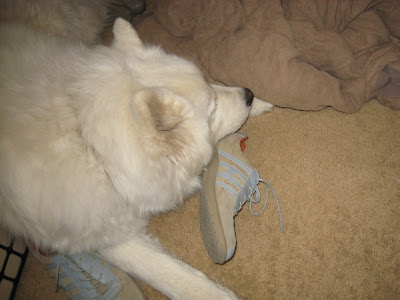 The vet took Samson in the back and tested him again. Best of all, Samson responded a little to the light this time. So he can see a little. The vet gave him another glaucoma test, which was negative. He checked all the other areas where Samson could have lost pigmentation and all were fine.

When we talked afterwards, the vet said he had been really worried on Monday, but now felt there was hope for Samson. We go back there on Monday, so it is clear our vet wants to stay on top of this.

Thanks again for your support.