Not The Best Results, A Mishap, & Comments Back on Samson & Me


Life is what happens to you while you're busy making other plans. 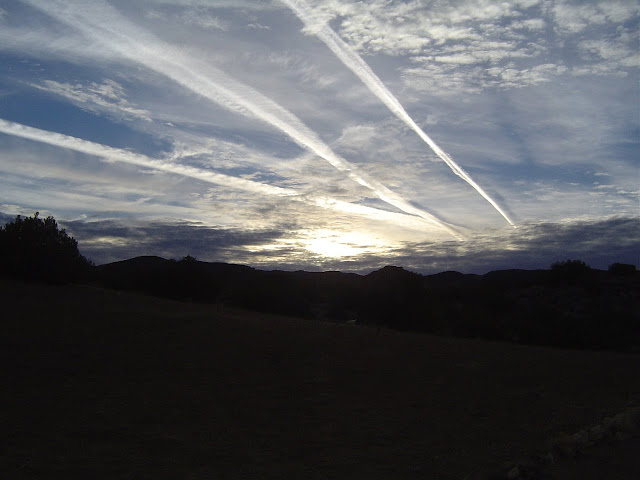 So my doctor called and told me they saw something on my mammogram and I need to go back to the lab for an ultrasound. He said in my left breast, my cancer was in the right one. I will call today and see if I can get two ultrasound appointments on the same day, since I also have to have one for my abdominal pain.

I'm thrilled that I just changed my insurance to Medicare with a high option plan instead of an HMO. It will give me better options for better doctors, should I need them. I'm just sorry I didn't get around to changing my primary, but I can live with him for now. 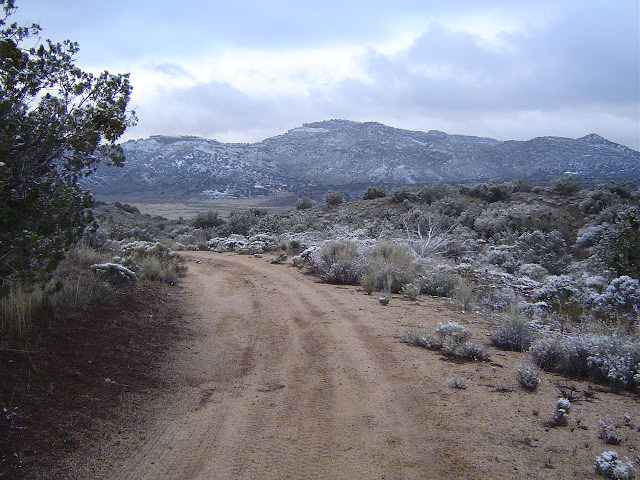 I feel sort of bad because you were so happy for the good results I just relayed. So now I'm wondering should one even talk about one's health issues on the blogs? I'm laughing about the emails that go back and forth between me and friends my age, as they are increasingly about our health problems. My mother approached old age with a great sense of humor. I'm working on it.

Of course I am worried it may be cancer, but I am not afraid of cancer. Been there, done that so I know the routine, or the basics at least. "Nothing in life is to be feared. It is only to be understood," said Marie Curie, and that's so true. Heights, excepted, I'll never get over that. 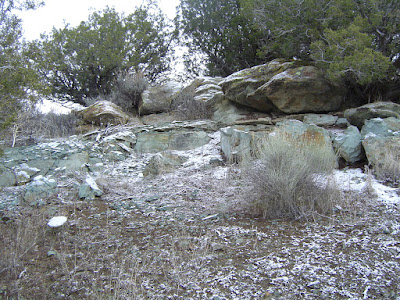 The other day, I went outside to see what my hubby was doing and, looking at him, instead of at the ground, I stepped on a rock, twisted my ankle and fell. I landed on my left arm/shoulder, the one I shattered when I fell over Soldier in 2010. Having just watched a bunch of football playoffs, I looked at my husband and said: "See, I fell just like they do on the football field." He didn't think that was funny, but we were both glad nothing serious happened. Just some aches and pains. 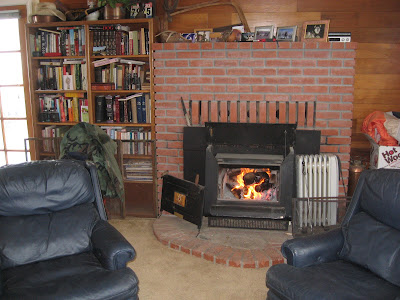 Now, I must let everyone know that I love, love, love this cold weather. Since we moved to the mountains, it has never been this cold for this long here. I only wish that most of the snow had not melted. To have snow would have been perfect for me. It was 20° this morning so, it's getting warmer. (Notice the ° sign!! How cool is that, thank you Chatty Crone!) 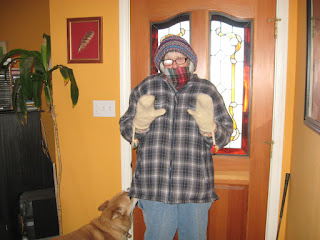 I want to respond to the worry about my jacket being too cold. It has some fakey fur inside and I also wear a thermal shirt, a cotton turtleneck, and my fisherman's wool sweater. 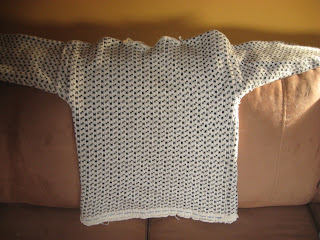 My more than 50-year old sweater.

The one I blogged about a last year that I've owned since I was 15 years old. Made in Norway, but called an Icelandic fisherman's sweater, it's sooo warm. 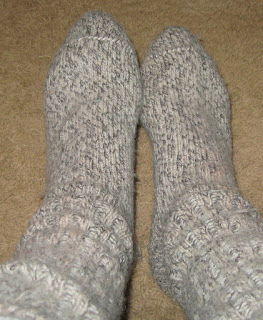 However, my feet got cold so I dug out these. In Sweden we call them raggsockor. They are also wool and very ancient.
Growing up in a cold climate, I know if you keep your ears,  neck, hands, and feet warm, you will be OK. So with my earmuffs, wool scarf, Swedish wool mittens, and now these socks in my snow boots, I have conquered the cold. 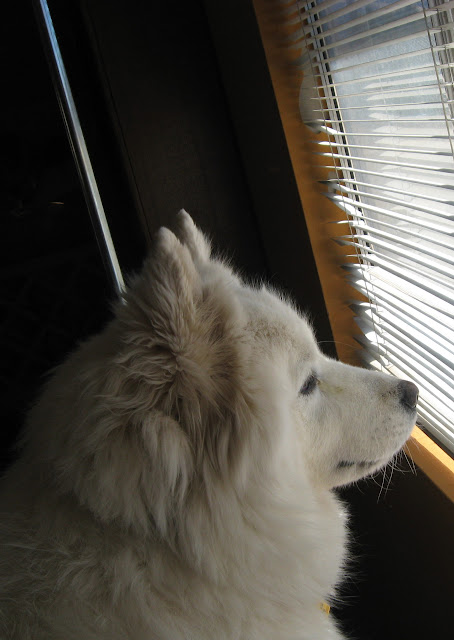 Samson Says: OK, auntie Feral Woman, I'll show you how I guard: First I sit by the window and NOTHING escapes me. When I see something untoward,

Finally, I get upset if someone may think I overfeed my dogs. I have never had a fat dog in my life, so I react badly. I'm sorry, but I have a need to explain why Samson gained weight for those of you who didn't know. If you know, you may want to skip this, except perhaps Samson's response to Feral Woman's comment about the guarding abilities of a Samoyed. She has one too and said that Samson may lick a burglar to death. I thought it very funny, Samson, not so much, so he has a rant of his own under his photos.

Samson, being the only surviving puppy of seven, came from a bad stock. I believe the mother dog was too old. My husband took him in at seven weeks to help the person who had the mother. Before he was three, Samson almost died from pancreatitis (sp?), he was throwing up blood and cost us $1,200 at the vet. He also had an enlarged prostate, so he was neutered. Never heard of an enlarged prostate at two years old. 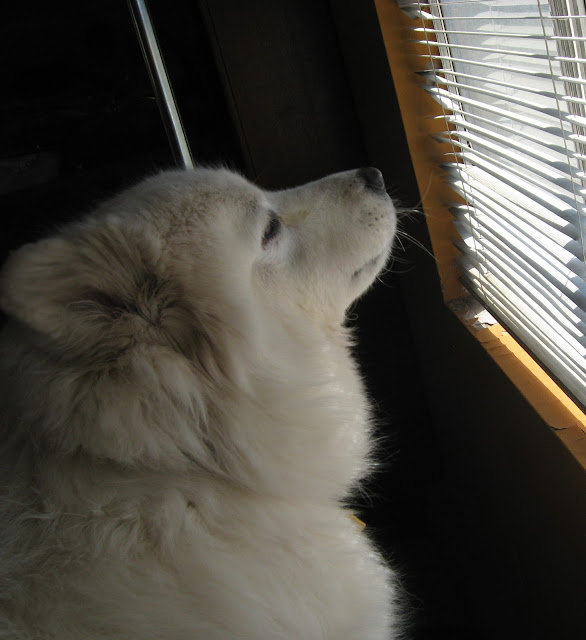 I prepare myself, I put my head back and get ready to

Then last fall he became blind and was diagnosed with UDS, a syndrome most common in Akitas and other Nordic dogs, like the Samoyed. He was treated with steroids and other drugs for about two months. During this time he was extremely hungry, so I fed him twice a day. It was a bit difficult to get that right. Plus he was so sick he didn't walk very far or very much. So the pounds packed on, but he got his eyesight back and the UDS is now in remission. It's a chronic disease, so he has to be monitored. 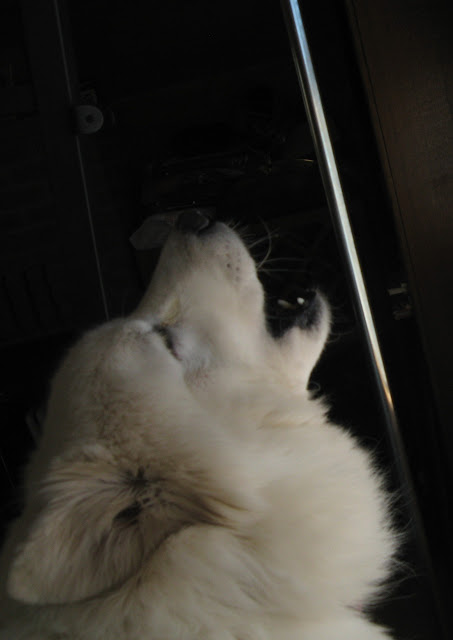 let out a fierce bark that scares even the baddest humans away! Of course, I've never really seen a bad human, but I will know one, they must smell bad, don't they?

He's not allowed in sunlight. I got him some dog goggles, or doggles, as they are called, but he has an ongoing fight with them and I don't feel like hassling with it, so instead we walk at dawn. A beautiful time to walk, but cold now. I found out that it takes the sun 30 minutes to clear the eastern mountain range. It rises at 7:05 in the desert and reaches us at 7:35 right now. 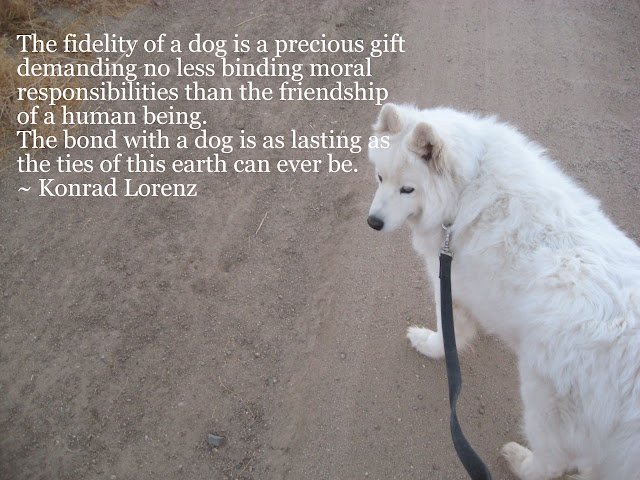 I am very determined to walk him, I have reduced his food, not tried the veggies yet, but I will. I am worried about diabetes, which is always noted as a common illness in Samoyeds. And, as you know, I have some experience with that as well.