The night before, my roommate and I danced with two cowboys at the Silver Dollar bar. Later we all went to the diner for coffee and there the guys explained a cowboy's attachment to his hat, while I listened and learned about a culture so foreign to me. When they dropped us off at our trailer, they asked if we wanted to go elk hunting with them the next day. I said OK, but my girlfriend declined. I thought they probably won't show.

But they did, two Wyoming cowboys in a pickup truck. I jumped in and we drove off to pick up the horses. It was 1969 and I had lived in Jackson Hole for a few months. While I had spent time with other locals, artists, writers, as well as some guys with long hair from San Francisco, I had never bothered to get to know a Wyoming working cowboy. I probably thought them too different from me, coming from Sweden, living in Princeton, in the midst of that mix of East Coast establishment types and university intellectuals.

But there I was, in an old pickup truck, and I knew this was an opportunity for me to learn about cowboy life, for real, not the movie version. So I listened as they talked about the war and the time they served in Nam. I learned a little about who they were, what they believed in, what was important to them, and how their daily lives went. All of it very different from anything I had known before, but in the end I liked them both.

Somewhere along the way, we picked up the horses. I had been riding horses all my life, English saddle mostly, but I also knew how to ride a horse with western tack. Little did I know that this would be a completely different horseback ride from any I had ever experienced before.

It was a beautiful, crisp fall morning in Wyoming when we set out and headed for the mountains. Sound of the rutting season were all around us, from elk, moose and other critters of the forest. My cowboy friends worked as guides for the hunters that came every fall, so they knew where to find their elk. Actually, in addition to the large National Elk Preserve, there were elk to be found everywhere around Jackson Hole from what I could see. 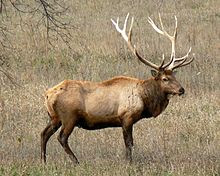 The mountain got steeper as we climbed. The path became narrower and narrower and soon ended at a deep ravine. The guy ahead of me turned his horse onto a ledge, not much wider than the horse, the deep chasm to the left and a solid mountain wall to the right. I thought, you gotta be kidding me! I guess I forgot to tell you guys I'm terrified of heights.


Since I took off to go hunting for elk in the mountains with two guys I barely knew, on a horse I didn't know at all, you could surmise correctly that few things scare me. But there's something about high places, about steep sheer drops where vertigo sets in, where I can't breathe, and all common sense deserts me. I knew the horse knew what she was doing. I knew I shouldn't transfer my fear to her, so I tried to calm down. I looked ahead, not down, and let the experienced horse take me up the narrow ledge. But it got worse, we came to a point where the lead cowboy turned in his saddle and said we had to dismount and lead the horses the rest of the way. It was that narrow. I'm sure I wondered what I'd gotten myself into as I grabbed the reins and walked on shaky legs, leading my horse up the mountain. There was, after all, no way to turn around.

After a while of this, we arrived at a plateau. A wide empty  space with the forest below, it ended abruptly in one direction with a drop down the abyss. On the other side of that narrow split in the mountain was another plateau and behind it a steep mountain wall. The plateaus were so close, the abyss so deep, as if in some prehistoric time a giant took a knife and sliced the granite mountain in two.

It was chilly up there and the guys built a fire for me. They were very polite and concerned about my well being; they even got a good supply of firewood for me to add to the fire while they were gone. When they were sure I was comfortable, they left me with the three horses, took their guns, and disappeared down the mountain into the forest.

Waiting by the fire, I may have watched a hawk soaring below, chipmunks and squirrels busily gathering food for winter, and the horses searching for something to eat off the bare ground of the plateau. I don't remember now, but I'm sure I petted the horses and walked around a bit, exploring, not worried about bears or mountain lions. I heard shots further down and assumed the guys got their elk. I knew there was some preparation needed in order for them to leave the elk to be picked up later. I didn't ask for any details of these procedures, but I knew I still had some time to wait.

Then I heard it, this incredible sound of horns making contact, and, as I looked over to the other plateau, I saw them. A herd of bighorn sheep was making its way down the steep mountain, looking on as two rams were clashing horns on the flat of the plateau. The rams, with huge horns curved around their faces, were going at it, right in front of me. It was a magnificent fight that went on for a long time. The powerful rams were snorting, grunting, and stirring up dust; clashing horns over and over again. All the while, the rest of the herd was perched on the steep wall of the mountain, like a theater audience, watching. I watched too, in awe and wonder, and forgot all about that narrow ledge that got me there to see one of nature's most magnificent spectacles.

The two cowboys, whose names I have long ago forgotten, came back in the late afternoon. Leaving, they chose a different route down the mountain, avoiding that ledge, and for that I was immensely grateful. It was getting dark when our path took us to a wide but shallow river. Snow began to fall as the horses carefully made their way through the water ~ a magical moment and a perfect ending to a day I will never forget ~ thanks to two young Wyoming men, Vietnam veterans, hunters, guides, and working cowboys.