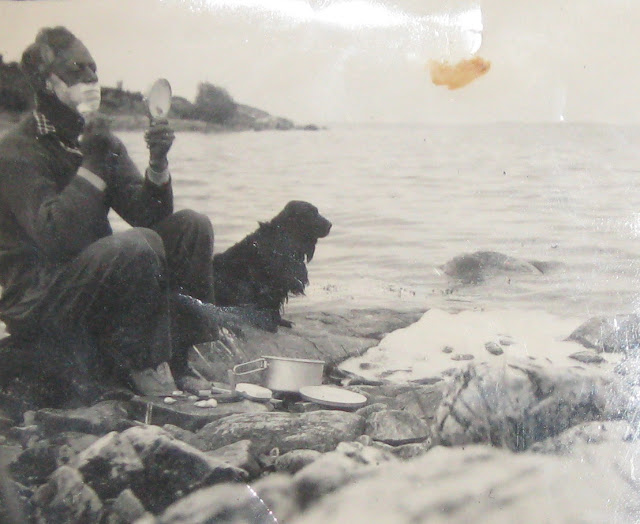 My dad with our dog Troika circa 1955, showing off his tan while dispelling the myth that all Swedes are blond and fair. My dad loved to take pictures, and when no one else was around, or for group pictures that included him, he would place his camera, a Hasselblad, on a tripod, set the timer and pose for his own shot.

This picture is very special to me because it speaks of our summers in the Stockholm archipelago. Every July, we left our house and set out in our boat, my dad, my brother, Troika, and I, while mom was happy to stay ashore. In our small motor boat, made of beautiful wood, we passed by the inner islands, stopping here and there at a fishing village to stock up on supplies or visiting friends. We were headed for the outer islands, those craggy rocks that meet the Baltic Sea head on, deserted islets, that from a distance look lifeless, except for their sea birds. But we knew better, we knew that there would be meadows with beautiful orchids and many other exquisite flowers, often a lagoon where we studied the small creatures of the sea, where the water was warm and swimming was a pleasure rather than an act of bravery. 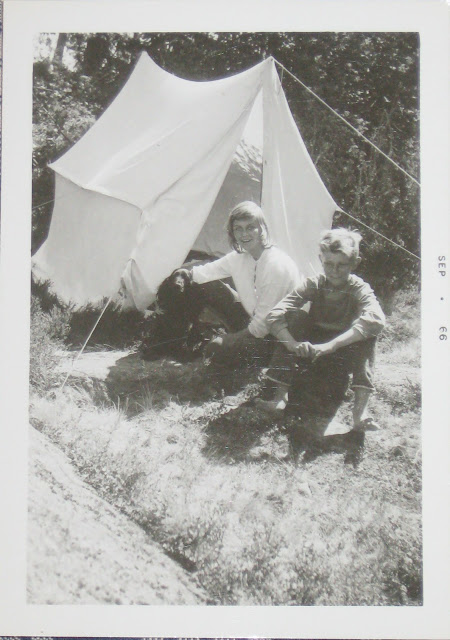 How simple the tents were back then. Small too, so I slept on the boat.

Living a primitive life at sea, I learned about the planets and constellations and I learned to navigate from sea charts. I was very proficient with those charts, which was a good thing since there are about as many rocks below water as there are above in the Stockholm archipelago. I learned to dock the boat on a rocky isle and to read the wind to know if it was safe to dock in a certain place. I also learned about engines, to discern engine problems, and to help fix those that inevitably would occur. If all else failed, since this was not a sailboat, we had to be self-reliant, so I helped row the boat if necessary. And it happened, once we had to row for an entire night.

I also learned to fish, to clean fish, fry fish over an open fire, make a fire, pitch a tent and much, much more.

This was my father's gift to his children, a gift never forgotten, and often thought of with love.........