Tales From The Vicarage ~ Lady Chatterley's Lover, The Book, The Trial, And The Bishop 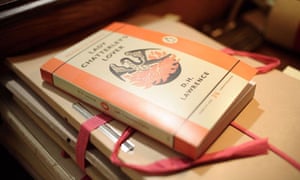 Once upon a time in England there was a big commotion concerning the publication of Lady Chatterley's Lover, a book written by D. H. Lawrence and published by Penguin Books.

The book was first published privately in Italy in 1928 and in France in 1929. However, it wasn't until 1960 that it was first openly published by Penguin Books in the UK.

The publication of the book, which is about a working class man and an aristocratic woman having an affair, caused quite a stir. An affair between the upper and lower classes alone was offensive to many in England. Then, in addition, the book includes several four-letter words considered obscene at the time.

Eventually a trial was held in London's Old Bailey charging Penguin Books with obscenity. The charge was supported by the conservative Archbishops of Canterbury and York.

Reading some of my letters home from when I lived in the vicarage, I was reminded that I knew John Robinson, the  Bishop of Woolwich, whose testimony for the defense against censorship of the book helped to secure a jury verdict in favor of Penguin Books.

The trial was a huge event in London at the time - reporters from newspapers and TV were packed outside the court. The commotion over this trial was sort of obscene in its own way and, somehow, I got a little bit involved at the end of it.

The Bishop of Woolwich was a liberal New Testament scholar, who was a very good friend of the vicar. He visited the vicarage frequently and I got to know him and his family. I wrote home that I was supposed to address him as, "my lord," but had a hard time doing this, instead I managed to throw in a "sir" here and there I told my parents. Sitting here reading it, I had to smile at my younger self.


The Archbishops of Canterbury and York were not pleased with the outcome of the trial and particularly not with the bishop. As a result of the liberal verdict and the upset Archbishops, the story continued to grow and the media descended on the bishop's house.

His children were scared and upset about the noisy crowds outside their home; they couldn't go out and play, they couldn't get to school and no one knew when it all would end. So the vicar and I decided we were going to bring the children to the vicarage and look after them there. That way, the bishop and Mrs. Robinson could sneak out of their house and go into hiding until all the excitement died down.

I don't remember much about this. It's truly a gift that my mom saved the letters I wrote home and a good thing too that I loved to write to them about all my adventures.

Looking back, I remember the the huge crowd. I believe I remember it because it was indeed scary. I had never seen anything like it, such a huge crowd, photographers, TV cameras, reporters relentlessly in pursuit of a glimpse of the bishop and his family. I have no idea how the vicar and I managed to get the kids in the car and drive out of there

What I do remember though is this: Soon everyone in the UK, including the vicar, bought the book, wrapped it in brown paper to hide what they were reading, and hopefully enjoyed it immensely!

"No other jury verdict has had such a profound social impact as the acquittal of Penguin Books in the Lady Chatterley trial." - The Guardian, October 22, 2010 (The 50th anniversary of the trial.)