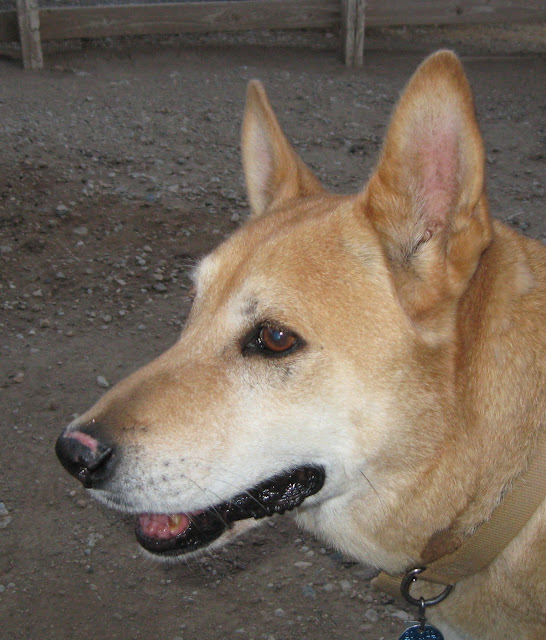 Errol was still working in LA after I moved up here with the dogs in 2006. One day in 2007, a realtor friend of his asked him to check some electric problem for a woman who was moving to Florida and was selling her house. Errol noticed a dog tied to a dog house in the yard, so after he checked the woman's electric, he asked what she was going to do with the dog. She told him the dog would go to the pound. Errol said, wait, maybe I can take him and started to walk toward the dog. 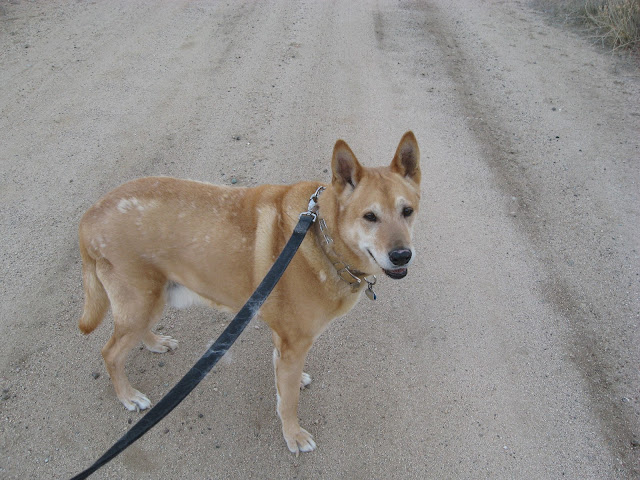 The woman yelled, "don't go up to him, he hates men, he will bite you!" Errol shook his head (I imagine that's what he did) and proceeded toward the dog. Of course the dog fell in love at first sight. The woman told Errol the dog's name was Soldier, and said good bye to her dog. 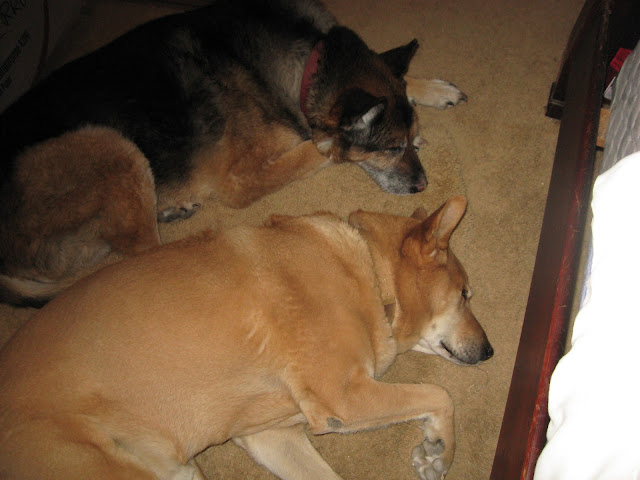 Later he came up here to stay with me, Angel and Princess. He was a lovely dog. I could tell he had a troubled past, but was still pretty well adjusted, except for his intense dislike of men. He got along well with the lady dogs, particularly Angel. He would go to sleep on top of her, so crazy about her. 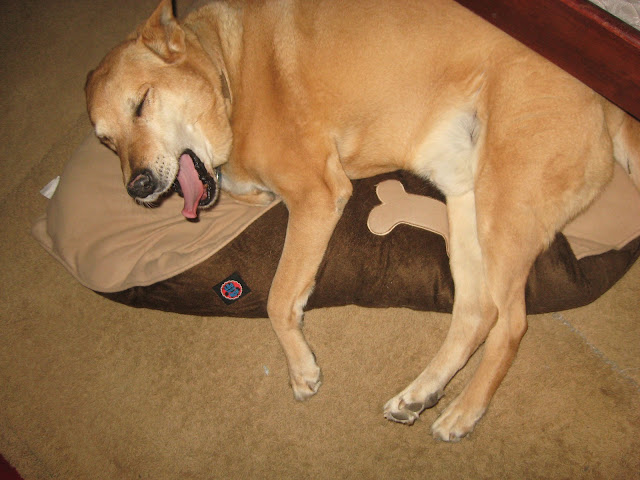 I couldn't find those pictures, they are somewhere on this blog, I'm sure. But here he is on his bed. And, as you can see, Soldier could sleep. 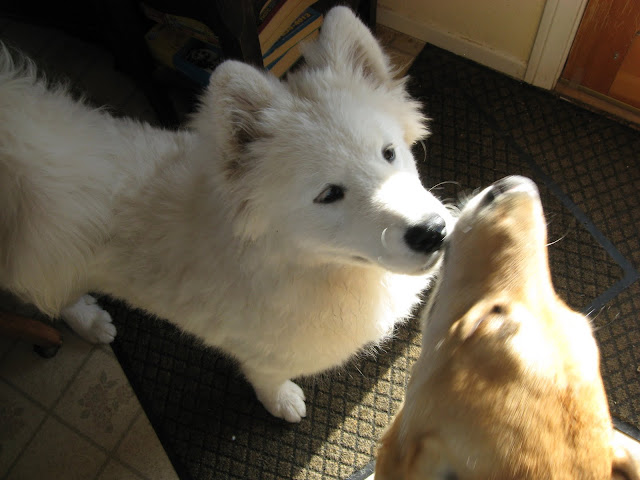 Samson started to come up here with Errol to visit in the fall of 2009. As long as he was a baby, there were no problems. 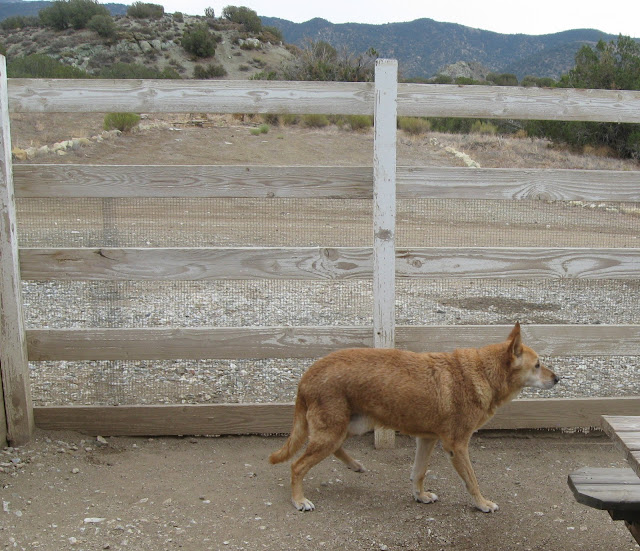 But as Samson grew up and the macho hormones began to affect his behavior, he beat up Soldier really badly. You can see how much Soldier is hurting in this picture. Samson calmed down as soon as we had him neutered, but Soldier was injured so badly we thought we had to put him down. We took him to our vet, who had never met him before. We told him Soldier was male aggressive, so he agreed to meet us outside. It was snowing, we walked Soldier around, the vet tried to touch him, no luck with that. So he prescribed pain medicine and suggested we get a harness for support and to help Soldier get up. 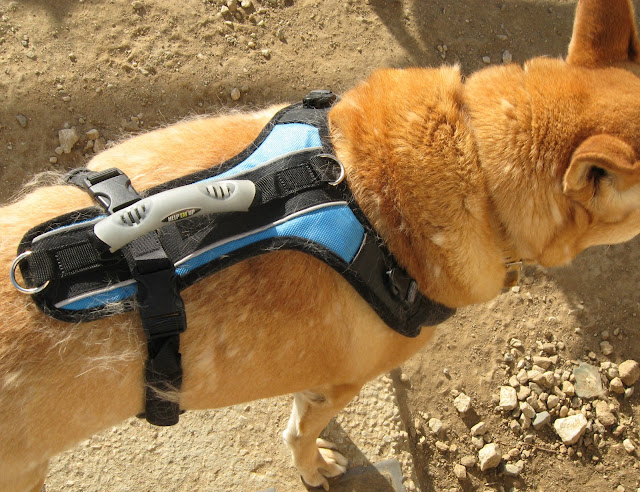 I must have mentioned this on my blog, because Terry, a blogger friend in Colorado, had just lost her old dog and had a harness that she offered to send to Soldier. I love how kind and supportive our blogger friends are. As it turned out, the harness was the perfect solution and it helped Soldier get well. 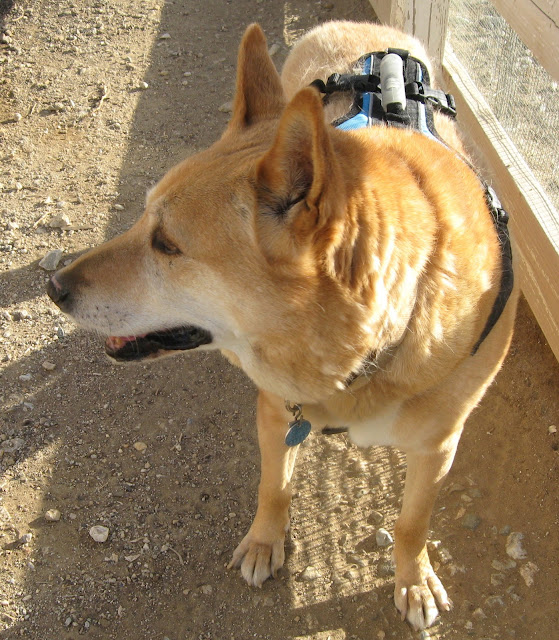 Whenever one of my girlfriends came to visit and sat down on my couch, before you knew it, there was Soldier in her lap. He just loved women, his world would have been perfect if all the men just went away. He never did anything, didn't even growl, but you could feel his distrust. 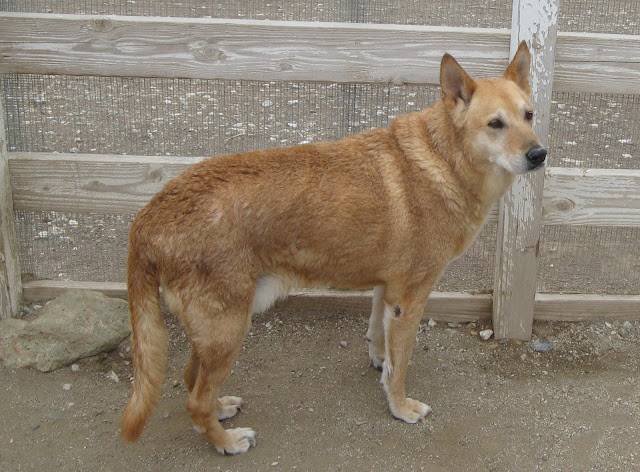 We went on many hikes with our dogs, back then. After Bandit was lost and later found in the hills, we kept Soldier on a leash, but he was an escape artist and would be so funny. He would twist out of his collar and run away down the path that goes at the top of our land. He would run away at a great speed and be gone maybe five minutes, then he'd come back, tired, tongue out, panting. He did this so often, we stopped worrying about him.
It was obvious that Soldier knew he'd found a good home and wasn't going anywhere, just having a fun run and a bit of an adventure. 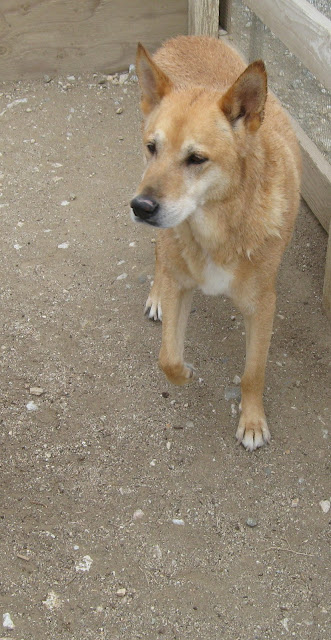 It didn't take me long to fall in love with this dog, he became my boy and he loved me so. He was seven when he came to us, and thirteen when he died, one evening in 2013. I was heartbroken, he was my boy, I felt he needed me so much and I responded to that.

I loved him so, he will forever be my boy. I think about him often and I've had a bit of a difficult time writing about him here.