The Theater King Of Sweden - Part 2

There were wars, famines, corruption, and politics as usual back in 18th century Sweden. It's comforting to be reminded that  humanity somehow survives and moves on.

I was always fond of King Gustav up to this point. In Part 1 of the king's story I listed his impact on Swedish culture, criminal justice, civil and religious rights.

However, after 1786, Gustav III became more and more determined to rule without a parliament, changing from semi-constitutionalism to semi-absolutism.

He declared war on Russia in 1788, thus violating his own constitution. The conflict between Sweden and Russia had been going on since the 1600s and was about control of the territories around the Baltic sea, including Finland, which at this time was under Swedish rule.

During this war, the Swedish Archipelago Fleet, officially a branch of the army, scored the greatest victory ever for a Swedish Fleet as it beat a far superior Russian Navy at Svensksund. This gave cause for concern for the Russian Empress and she wanted peace.

Thus the war ended by a treaty between the Theater King of Sweden and Catherine the Great of Russia. The war didn't change much for either side and Finland remained a Swedish territory for the time being. 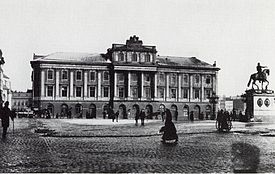 The Royal Opera House where Gustav III was assassinated.

At this time, the king also abolished most of the old privileges of the nobility. Needless to say, this did not sit well with members of the aristocracy. Conspiracies were common and there were frequent threats against the king's life.

On March 16, 1792, a masked ball was held for the public at the Royal Opera House. While he attended a dinner before the ball, King Gustav received a letter threatening his life. Since this was not uncommon, the king ignored the warning.

Soon after he entered the ball, he was surrounded by three men, all part of the nobility, wearing black masks. One of them, a Captain Anckarstrom, shot the king in the back. The king was taken to his rooms, the doors of the opera house were sealed, and the conspirators arrested. King Gustav didn't die immediately, but his wound became infected and he died on March 29, 1792.


Some of you may remember that I spent most of my summers in Sweden on the waters and islands of the Stockholm archipelago. It was special for me to learn about the Archipelago Fleet, which was not large, but tactical, being victorious in battle over the Russian navy.