How 14 Things About Me Became a Mini-Memoir

Welcome Jiller, a new follower of Desert Canyon Living. Jiller, you didn't leave a link to a blog. If you have a blog, please leave a comment to provide a link so I can visit you.
I owe you 14 things about myself, seven for each of the awards that I received recently. Did you think I had forgotten? I didn't forget, but since I have done this before and posted the usual things about myself, I have been trying to come up with some unusual stuff that, hopefully, will amuse you. What I ended up with is a miniature memoir, way too much information for this purpose, but I had a hugely fun time writing it, so I hope you will have fun reading it. 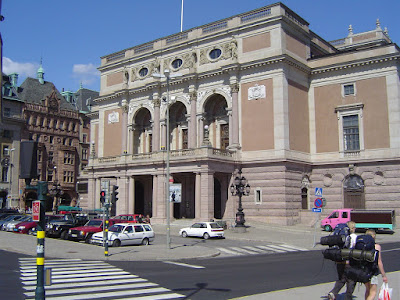 1. When I was young in , you could go to the Royal Opera House and buy an inexpensive ticket for the upper balcony where you could sit and enjoy all the great operas and opera singers. I went often and I have loved opera ever since. One of the operas, The Masked Ball by Verdi, tells the story of the assassination of the person responsible for building this very opera house, King Gustav III of . 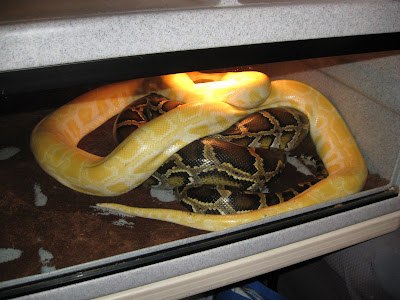 Two Burmese pythons. It's not Sahara, but she looks like the yellow one.
2. I once kissed a snake. Her name is ; she is an albino Burmese python, rescued by my friend Rachael. is a vital part of Rachael's animal education program, Sydney's Legacy. She is now 14 feet long; at the time she was "only" nine feet. 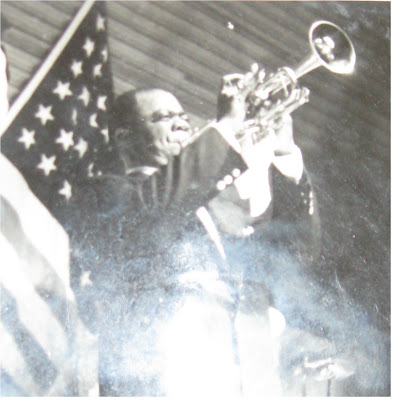 3. I once heard Louis Armstrong and his All Stars perform in the Concert Hall in . The year was 1955, the concert  was fabulous, and the evening unforgettable.

4. I cannot dance. I cannot find that second beat. I also cannot sing. Totally tone deaf. So now you know! 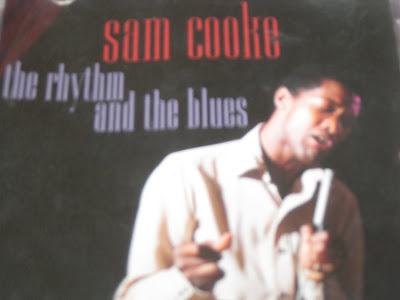 5. Even so, I have many favorite songs; I think my most favorite of all is A Change is Gonna Come, sung by Sam Cooke.


6. I once dated a State Department guy, a expert in the Nixon era, who taught me to eat with chop sticks, and introduced me to Dean Rusk. If you don't know who Dean Rusk was -- well, he should be in the history books. That's how long ago all that took place. 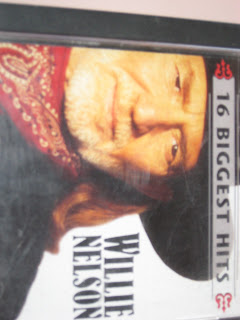 I hate when this happens to my pictures.
7. Two of my most favorite country songs are on Willie Nelson's 16 greatest hits: Angels Flying Too Close to the Ground and Always on My Mind.
8. I once, very briefly, dated a spy! Well, an ex-spy, he was ex-CIA, fascinating, remote, and somewhat elusive. It didn't last long, but still……. 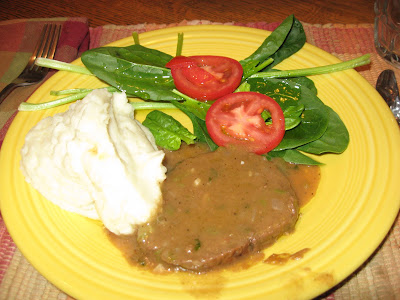 9. I really don't like to cook. I can tell that my husband sometimes gets tired of cooking and who can blame him. I wish I had that feeling in my heart that all great cooks seem have and even those who, perhaps, are not so great but keep plugging along. That feeling in my heart of love and wanting to feed and provide for my husband and my friends. Even my dogs. I do cook, both for my husband and my dogs, sometimes, but I don't have that love in my heart and I don't know where to find it.
10. I once was part of an ad campaign in for Norman Granz and his Jazz at the Philharmonic and got to meet and hang out with Gene Krupa, who was one of the great jazz drummers of the era. Being part of an era, sure makes me feel real old. Ancient! 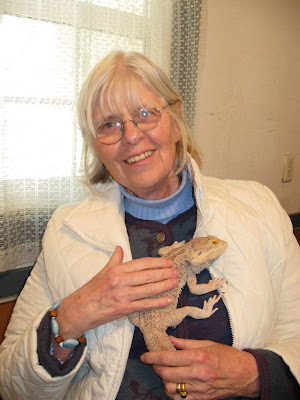 11. I love a scaly critter. His name is and he is a bearded dragon lizard, native to . He too lives with my friend Rachael and her critters and is a huge part of her animal education program that bears his name. He is one of the most adorable animals I have ever met.


12. I once went elk hunting with cowboys out of , where I spent a fall and a winter. Since I didn't want to hunt, they parked me on a plateau with the horses, made a nice fire for me, and took off looking for their elk. There was a ravine and then another flat plateau across from it. As I sat there, I heard a bang, bang, bang noise and when I looked up, there were the bighorn sheep, duking it out. It was fall, rutting season, and their power was mesmerizing. It went on for a long time. Their herd was there also, up and down that mountain. An unforgettable experience.
13. That winter in , I worked as a waitress in an Italian restaurant. I also cleaned a rich woman's refrigerator once. All to make a living for the winter. At that woman's beautiful home, I was greeted by several moose that were hanging out in her backyard. I will never forget neither the refrigerator nor the moose. All very big! 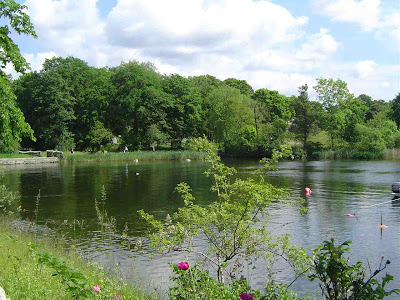 14. When I was in in 2001, my cousin and I went to the south-western part of the country to look for our roots. We knew the village where our great-grandfather and his family lived. We knew about, and found, a couple, both in their 90s, who actually knew our great-grandfather. It even turned out we were remotely related to the old man, Ivar Carlsson. When we, two strangers, knocked on their door and told them we were looking for our roots, they invited us into their immaculate home for coffee and home-baked cookies and cake. Ivar had a church/county registry that went back for generations and he was able to show us one very determined man, named Anders Anderson. Anders was Ivar's great-grandfather's brother. It was through him we were related to Ivar. Anders lived in the early 1800s and married three times.  His first wife died in child birth, and the twins she gave birth to died also. His second wife died too. But Anders did not give up and finally had children with his third wife. One of his children was our ancestor. It has been very interesting to realize that if this guy, Anders, had given up on having kids a long time ago, I would not be here today.

I leave you with that thought….what if? Interesting, isn't it?
Posted by Inger at 7:14 AM