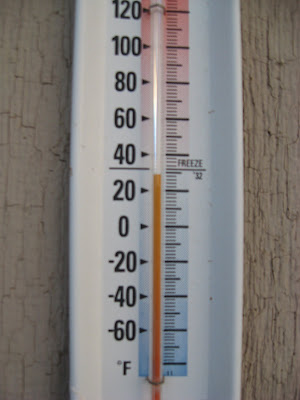 The treasure for this Tuesday is Wildlife in the Canyon. There is so much going on in nature this time of the year: Babies are born all to all species, parents are busy finding food and defending their territories. Bugs, flies, lizards and snakes are waking up or coming to life. I think some of them took a turn-around and went back in their holes because of the cold temperatures lately. This morning we woke up to frost once again and the temperature was 28 degrees F at six a.m. So we had to say goodbye to our vegetable garden for now. We may plant some more later or we may not. Before, I got up I snuggled in bed, listening to an owl hooting outside. It was lovely and it was then I decided to dedicate this post to wildlife, the real and true treasure of our lives here. 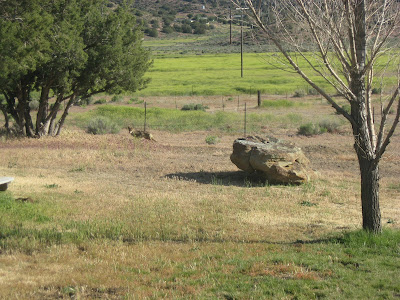 Yesterday, we had a visitor. This rather scrawny looking coyote came by. Right after the coyote left, three little baby jack rabbits came out and started eating. We have seen them grow up and we wonder what happened to their parents. They had a close call with the coyote.
About a month ago, we saw a very large, tan colored, bob cat. The cat was so big we started looking for a long tail. I'm still pretty sure it was a bob cat, while my hubby, wanting to be more dramatic, thought it was a young mountain lion. I was too busy looking for a tail to take a picture and the cat was far away. It was playing in the grass and so much fun to watch. Very cute, at a safe distance. 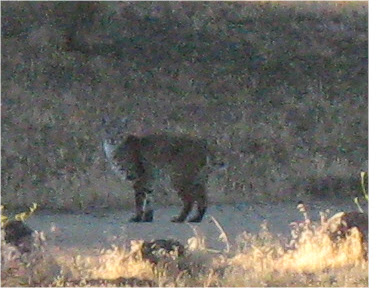 This is another bobcat that came by closer to the house. 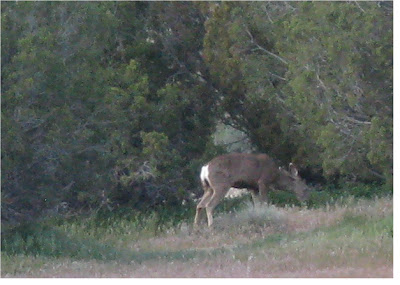 Two mule deer also came by last month and it was fun to watch them. We have deer in the canyon, but not that many and we seldom see them down at our ranch. 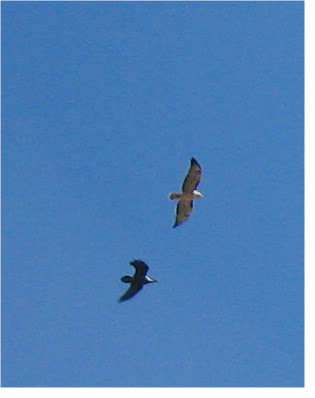 This photo is of another encounter we saw on a hike this past winter.
My husband saw a fight in the air between a red-tailed hawk and two ravens that ended with the hawk fleeing as fast as it could. 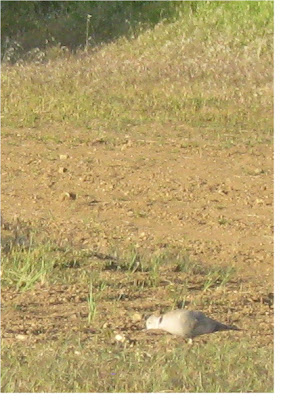 And I saw a strange sight as far as birds are concerned. When I sit at our dining room table, I face north and have a nice view of wildlife passing by. Last night, and also a few days ago when I took these photos, I saw two doves pecking away in the yard. At first I thought they were mourning doves, a bird I'm very familiar with from . However, on closer inspection, I noticed these birds were almost white and had a distinct black band around their necks. So I looked them up in my Audubon Society field guide and identified them as Ringed Turtle Doves. I always thought that turtle doves just existed in that Christmas carol. But I was in for another surprise when I read about them at the back of my book. This southern Asian species has been a caged bird for centuries, I learned, and a small number of them escaped from captivity and lives in down-town and has apparently not spread. So its range is downtown L. A. where it is localized to a few parks and tree-lined streets. I guess these two, like me, got tired of all that traffic and noise and decided to seek adventure in the mountains. 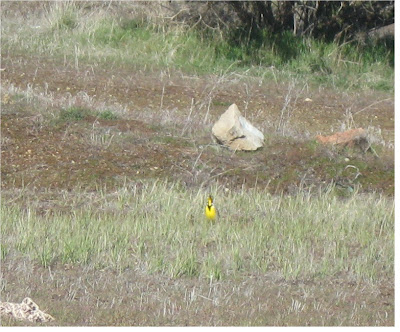 The Western meadow larks are still here and I'm happy because they sing the prettiest songs of all the birds in the canyon. 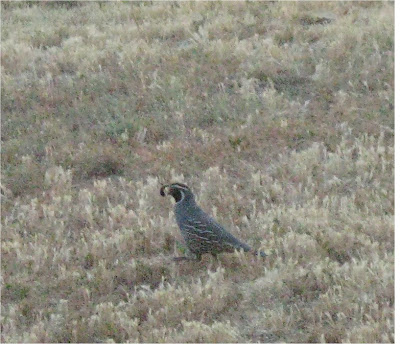 Earlier in the spring, I would see the quail in pairs, now I see only the males. I assume the females are busy raising their many young chicks or keeping their eggs warm. I imagine they find food closer to home while busy with their young. I'm looking forward to later in the summer when I get to see them with all their little chicks. 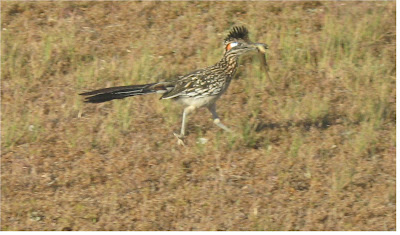 Best of all, we spotted this guy, my favorite canyon bird. He was marching north and kept on marching that evening about a week ago. I have looked and looked, but I have not seen him again. I hope a pair is living somewhere around here because I find road runners the most entertaining birds to watch. 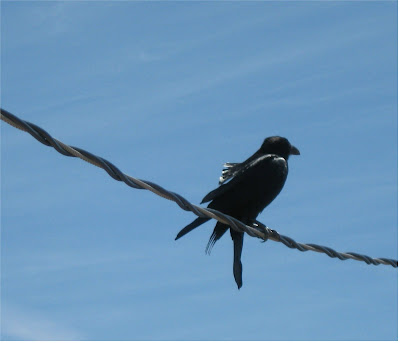 Finally, the most common birds in the canyon are still here, of course, looking for trash and trouble, but also helping to keep the canyon clean. My friends, the ravens.
As far as my health goes, I'm feeling much better and I will probably find out what's going on with my back later today. Have a great day everyone!
Posted by Inger at 12:02 PM