Merry Christmas!
I don't have any photos of Christmas in my childhood home. I hope I can describe the sights, sounds, and particularly the smells of a Christmas in a Swedish home in the late 1940s, early 1950s. 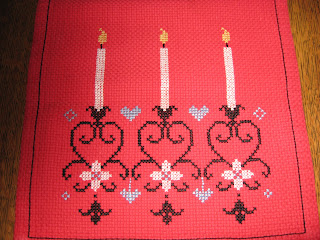 A part of a Christmas table runner made by my grandmother.
In the kitchen of my childhood home, it was a busy time preparing for lunch and the big Christmas dinner later in the day. While the Christmas ham simmered in a big pot, various meats were added. After the ham and the added ingredients cooked for a long time, something wonderful happened in the
pot: A spicy broth, thick and juicy, was getting ready for the traditional dipping in the pot, dopp i grytan, ceremony. After my mother removed the ham and rubbed it with brown sugar and mustard and studded it with cloves, she put it in the oven
to glaze. Then the family gathered around the pot to dip bread in the hot broth.
If our family hosted Christmas Eve for our grandparents and other family members, they would arrive in the afternoon. By now we, the children, would be beside ourselves with excitement and curiosity about our presents. Oh, what could it be, will I get what I really want and so on. When we were older we would look at the presents under the tree and, reading the poems that hinted at their contents, we would try to figure out what was inside. Home made glogg, was served throughout the day. Glogg is the Swedish Christmas drink. It smells heavenly and I think it's the smell that does it for me. There is nothing like it. Made from a sweet and a dry red wine, with orange rind, raisins and spices, it's heated and when hot, vodka, or some such alcohol, is poured in and put on fire. While it's burning, sugar cubes in a strainer are dipped through the fire into the wine, creating a wonderful taste and smell. It's something special for sure.
Dinner started with the traditional smorgasbord. Eating was frequently interrupted by a toast of aquavit, brannvin, which involves the following ceremony:
You raise your glass, look the person you are toasting in the eye and say: Skoal! Everyone then replies: Skoal! Then you drink the shot glass of this strong alcohol, followed by some of the Christmas ale to wash it down. After several of these toasts, I'm sure the lye fish, lutfish, that followed was more palatable. You also drink the traditional Christmas ale throughout the meal. I wonder now how tipsy the adults were by the end of the day. What with the glogg and all. 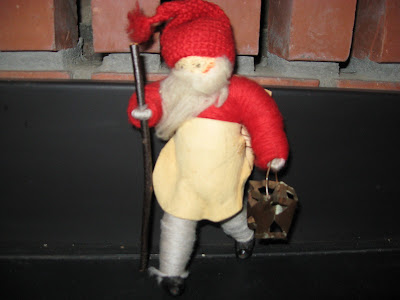 My most treasured possession, this Tomte was made by my grandfather.
After the fish, it was time for the wonderful Christmas ham and after that the rice porridge, risgrynsgroten. There are a couple of traditions involved with this porridge as well. With the almond that I told you about in an earlier post. If a single person gets the almond in their bowl, it's said that he or she will get married in the following year. If it lands in a bowl of a married person, he or she will prosper in the year to come. And, finally, in olden days, a plate of porridge was placed in the barn for the little gnome, tomten, who was thought to live there. 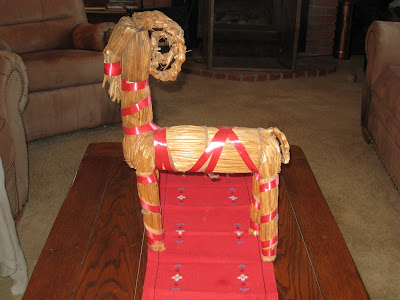 In the land of the reindeer, strangely, Santa arrives in the company of goats! Straw goats, like this one, stay under the Christmas tree in Swedish homes.
After this seemingly endless meal (to us kids) it was time for the presents. As I said above, my grandfather was Santa when we were small. He would trudge through the snow, up the steps, and knock on our front door with a question: Finns det nagra snalla barn har? ("Are there any good/nice children here?") You were supposed to be good and nice in order to get your gifts from Santa, so of course we yelled: "Yes!" And then we had to wait for my dad to read the poem on each gift before we could proceed to rip off the red sealing wax and open our presents.
I believe the evening ended with coffee and cakes and a glass of the Christmas punch, not an American kind of punch, but something else, in a bottle. A very 19th century kind of drink that evokes smoky libraries where the gentlemen would withdraw after dinner to drink their punch and smoke their cigars. That's about all I can think of to describe it.


I'm sorry I have been too busy to read and comment on your blogs, thereby missing all the ways you, my blogger friends, prepare for the holidays. I miss you all lots. I will take a break from blogging until the end of the year when I will tell you about what happened in the Sweden of my childhood during the 12 days of Christmas. Have a wonderful Holiday Season!