First, let me say we are OK. The fire, while still burning in spots will be put out today, I'm sure of that. The weather is cooperating, 40F overnight, clouds, and little wind this morning. Then let me say that I was planning a delightful blog for today, but now it has to wait until Friday or Saturday. 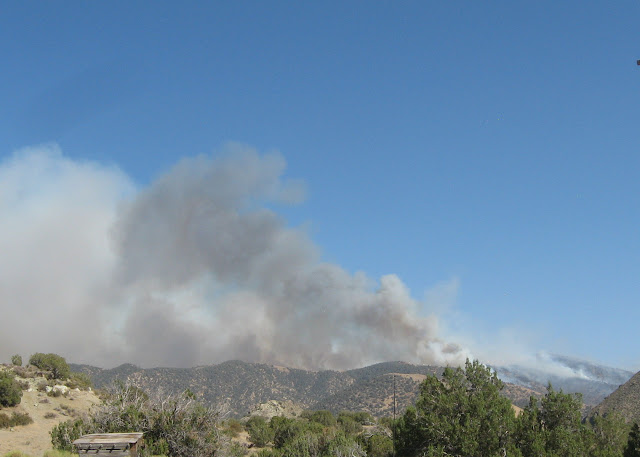 I was in town getting new eyeglasses and my teeth cleaned yesterday. When I was done and turned my phone back on there were 7 calls from my hubby and 2 from my neighbor. I saw the fire from town, but didn't realize the canyon was in jeopardy. I told my husband, I 'm coming home and set out on HWY 58. 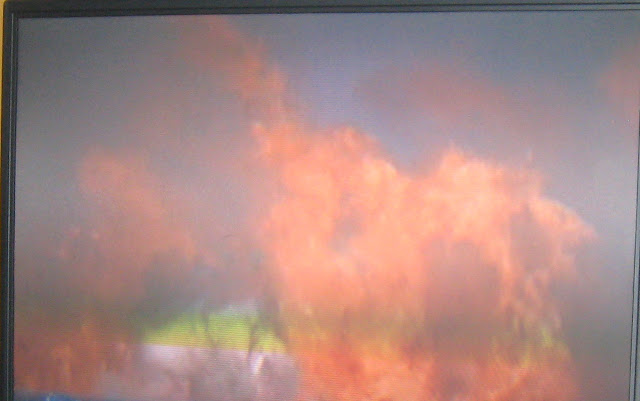 This picture is from TV News and it's what greeted me at the exit, which wasn't closed so I got off the highway. There was an enormous number of sheriffs, fire trucks, police cars, and people wanting to go home gathered by several fields engulfed in flames and the mountain behind it burning too. No luck with going home, no one was allowed to enter the canyon.
So I went back to town, to the store for some emergency food, with my insulin dependent diabetes, that has to come first -- insulin and food. Then I went to my brother-in-law's place to see if anyone was home and they were. So I knew I would have a place to stay. And I stayed for a while to rest. 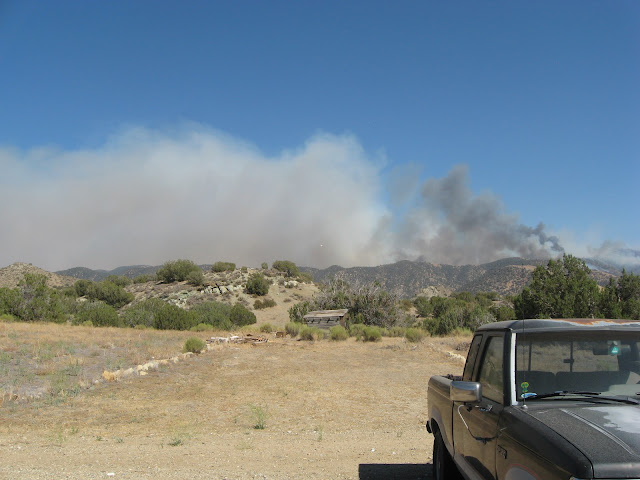 My husband called and said the flames were on the ridge line behind us where there is a real forest of tall fir trees and things could get bad fast. He said the smoke was so thick at our house, it was difficult to breathe. I had my medical emergency kit ready and we decided, so calmly, what else we would take. He packed it, as much as he could carry since he had no working car there....but that's another story. If it got bad, I was sure he would coordinate with the rescue manager or find a ride somehow. I really, really hated to be separated from him, Soldier and Samson in an emergency. That was the worst. 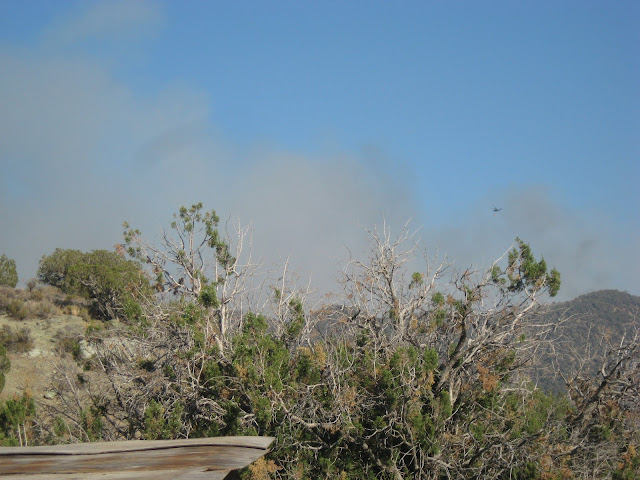 But I couldn't just sit there, so I decided to go back to the canyon and see what was happening. Driving down the road, I looked up at the freeway, which was completely covered in trucks standing still. All seven miles from town to the canyon and beyond hundreds of trucks that couldn't move. I have read that tens of thousands of trucks go through the pass every day, and now I believe it. I have never seen anything like it. Somewhere in there a sheriff told me the canyon was open again. So I was able to get home. The wind had changed and the fire moved east toward the wind farms on the other side of the mountains from where we live. 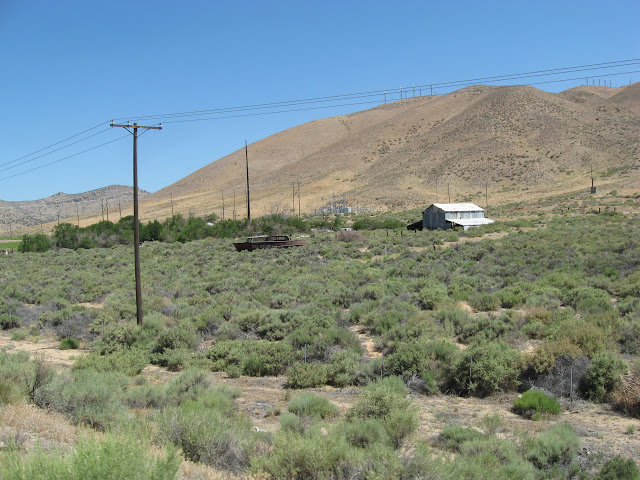 This is what was lost, a house built in the early 1900s, it must have been one of the oldest in the canyon; this field, and all brush on the mountain above; many wind turbines, and, sadly 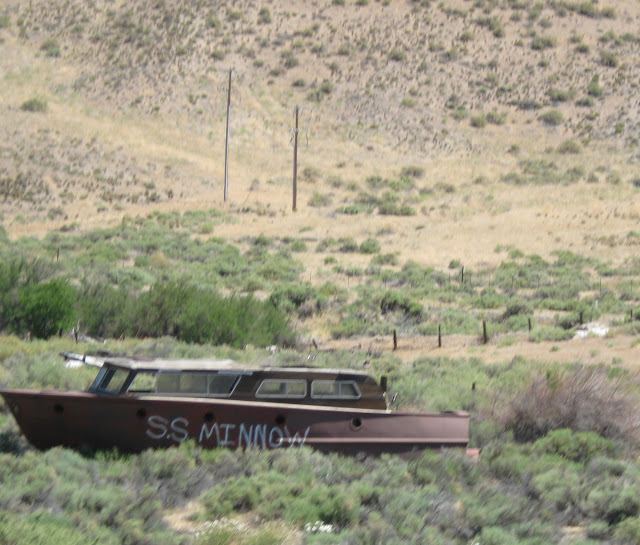 the SS Minnow. I loved this boat, all by itself in a field. On the TV news, they mentioned her and called her: The iconic SS Minnow. So I guess she must have been something in her day. 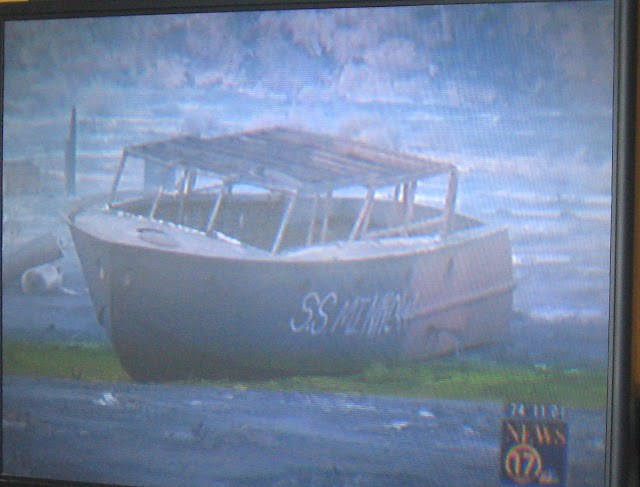 This is what's left of her now. 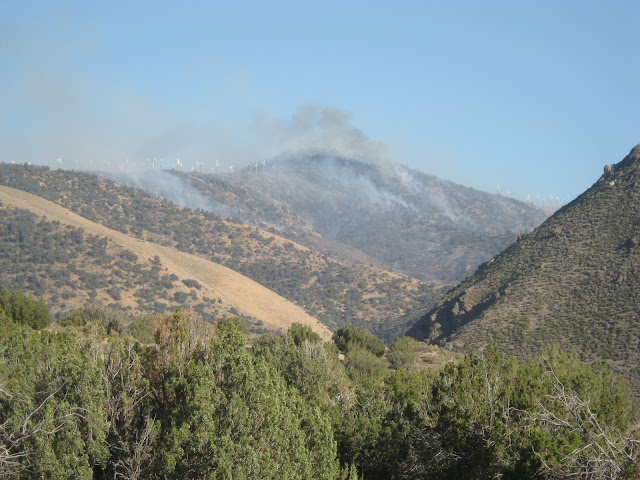 When I drove home on the canyon road, I saw so many fire trucks, fire fighters, sheriffs, and Kern County official vehicles, and I felt calm. When I saw a fire fighter on the road, I said "Thank You," through my car window.  Now that I have seen a field of rabbit brush burn up, now that I have seen a mountain go up in flames, now that I have seen that up close, I have some knowledge. I believe that knowledge helps one be less afraid. The fire will end up burning less than 2,000 acres, so not a large fire. The response was enormous. With all the wind farms on those mountains a lot was at stake. The wind farm closest to us, in the picture above, is completely burned. But we are OK and for that I am so grateful.