The Murals of Tehachapi, California ~ The Loop & A Village Scene


At the Tehachapi Loop long trains go around in a circle and through a tunnel where the front of the train crosses over the tail end. Since my photos of the mural are not that clear,  please check the Loop out on Google and YouTube; it's really  interesting to view. 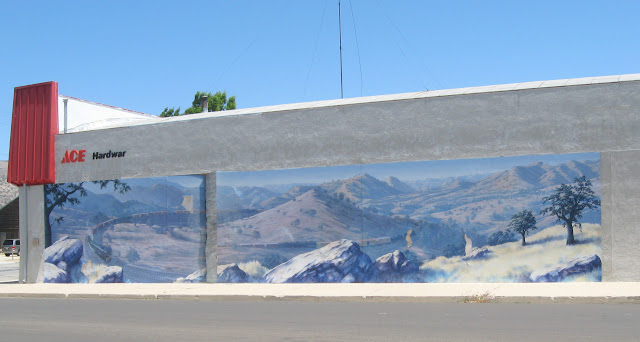 The Historic Tehachapi Loop ~ Artists: John Pugh and Marc Spykerbosch ~ A portion of the mural was repainted by local artist Lyn Bennett in 2008


The Tehachapi mountains form a barrier between the  , one of the major produce growing areas in the the  to points south and west. From the floor of the San Joaquin valley to the Tehachapi Pass, the mountains rise to 4,000 feet over 46 miles. When the Southern Pacific Railroad was built through the valley, it was thought it could go no further when it reached the foot of the mountains in 1875. The engineers in charge considered it an impossible task to continue the railroad up the steep mountain grade. 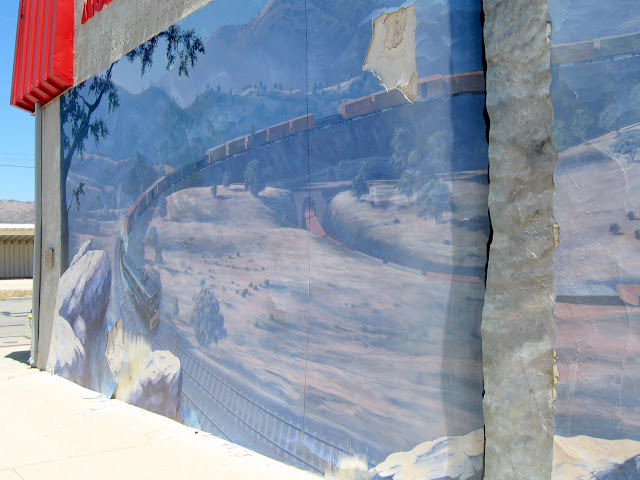 Legend has it that chief engineer William Hood observed how donkeys and mules traversed the mountain in circles and got the idea for what became the famous Tehachapi Loop. What he actually did was to survey the mountain from the top rather than from the bottom. After studying the layout of the land, another version of the legend has it that one morning he staked out the two huge circles, measuring over 3,700 feet, that would become the Tehachapi Loop. In addition, 18 tunnels were built into the mountain. The railroad was built by Chinese workers; about 3,000 came from Canton, China, and many stayed in the area after the work was completed.

Today, this is the busiest single-track mountain railway in the world. 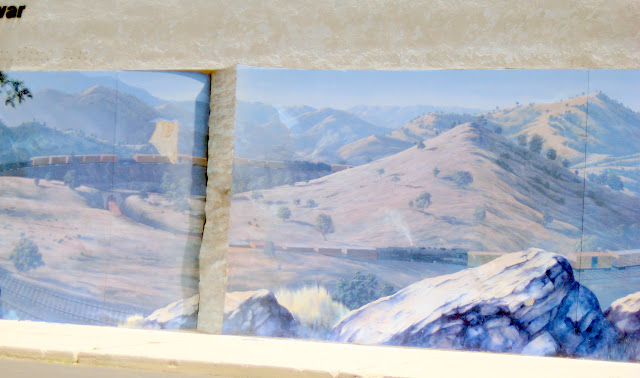 Considered one of the seven wonders of the railway world, the Loop is also one of the most popular trainspotting sites. Fans come from all over the world to view and photograph trains going through the Loop. What they are most interested in is to see a very long train go in through the tunnel at the bottom of the Loop, come out the other side, and then circle the actual Loop, and finally crossing over its own last cars as they move into the tunnel below. I have seen this and it is something to behold. 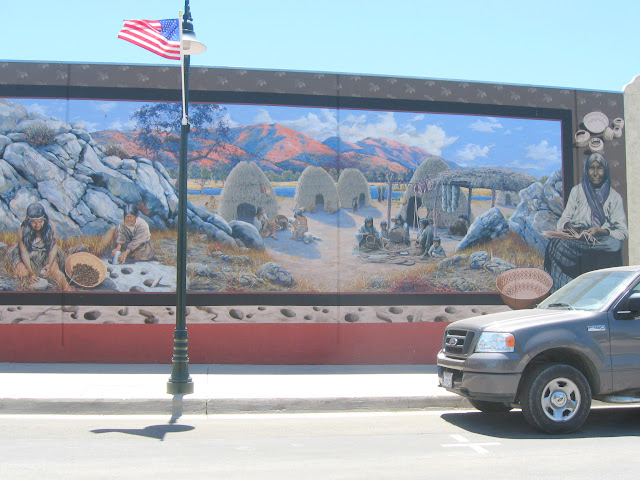 This mural depicts village life of the Tehachapi Native American tribe, the Nuwa (or Kawaiisu), before they had any contact with Europeans. In the days before the Europeans arrived,the Indians lived in villages of 60 to 100 people. They harvested plants and animals found in the mountains and deserts, and used available raw materials. As seen in the mural, the Kawaiisu made beautiful baskets and are well known today for their skill in basket weaving. They also used the Gray Rabbit Brush,   my nemesis here,to make tea, dye, and for medicinal purposes.

In 2011, Tehachapi's Kawaiisu Project received the Governor's Historical Preservation Award for its work in documenting the Kawaiisu language and culture. There is also a section devoted to the Kawaiisu in the Tehachapi museum.