A Birthday Picnic on the Mountain & Visiting the Nuns' Goats


All I wanted for my birthday was a picnic on the mountain. True to form, my husband fixed a chicken salad we packed  all the necessary picnic stuff and took off. Located at 5,782 feet and only eight miles southwest of town, Tehachapi Mountain Park is another great getaway in this area. 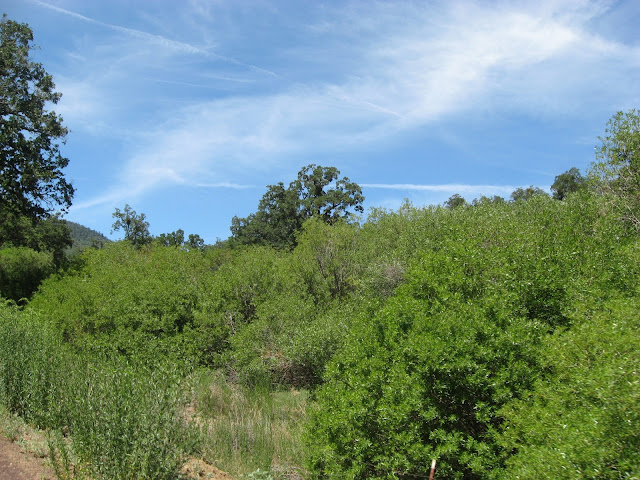 We both soaked in the lush greenery that lined the winding mountain road, so good for our parched desert souls. "It looks like the South," said he as we made our way up the mountain. 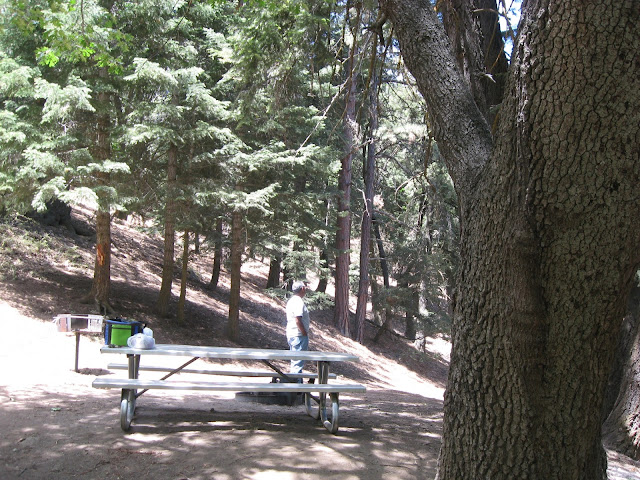 Once we reached the park, we selected a spot among stately fir trees for our picnic and I took a distant picture of my husband who doesn't want to be seen on my blog. 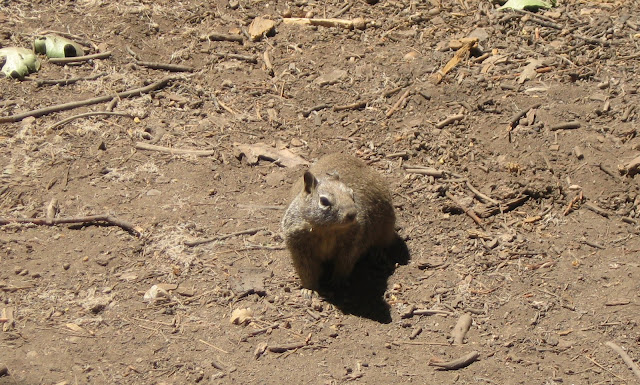 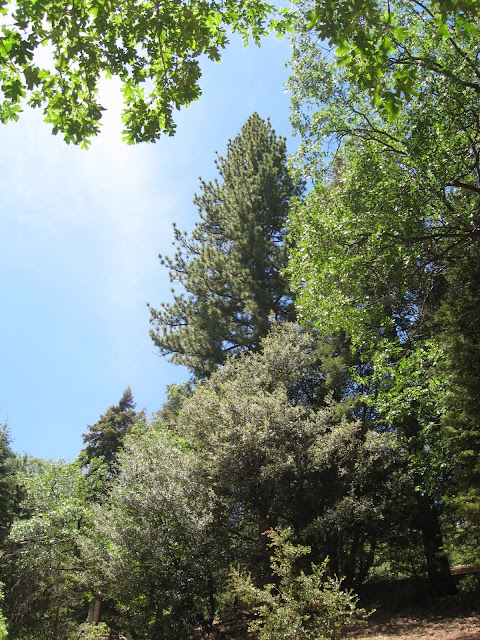 After we ate, I tried to take some pictures of the tall trees, but  it was a bit difficult since we were on a sloping mountain side. 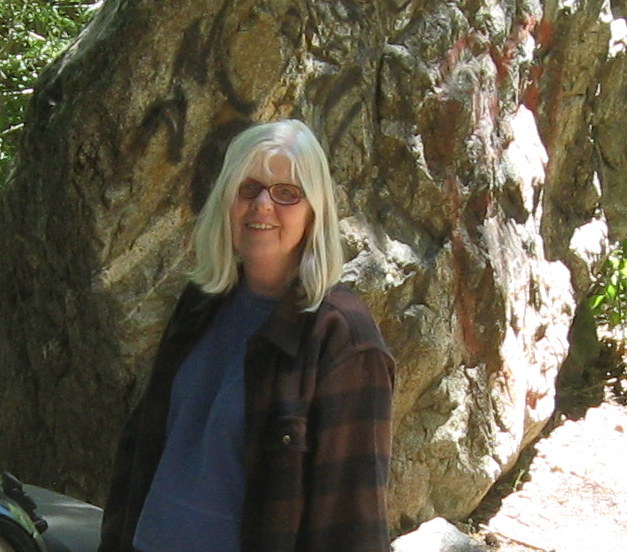 So, instead, we took each other's pictures like crazy, giggled, and had a great time! Having just received my new driver license with, yes, its up-to-date, revealing picture, I was happy with this one. Taken in the shade, it doesn't show my wrinkles, which are multiplying at an alarming rate. I was so happy, I made this my new blog photo. 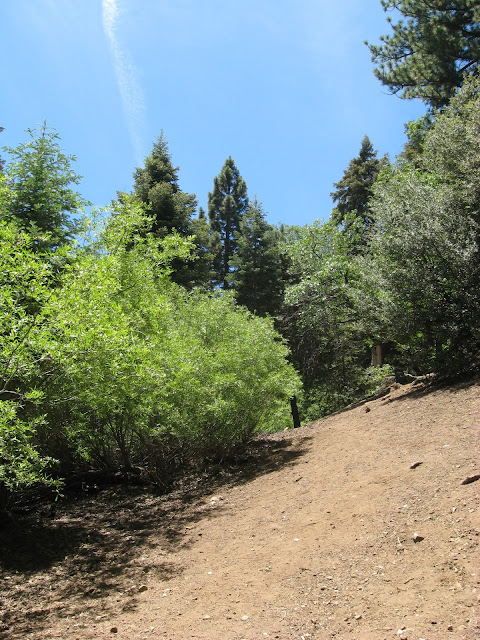 The trees around us were climbing up this steep slope and 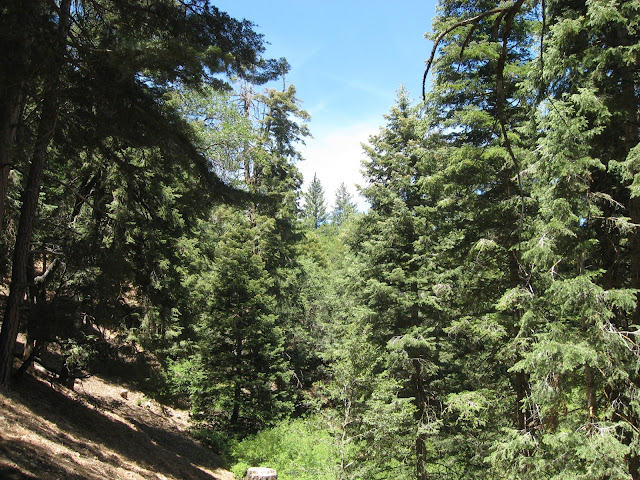 down as well, so tree tops got chopped off in the pictures. The trees were beautiful and the place smelled heavenly of pine needles and all the wonderful smells of the forest. 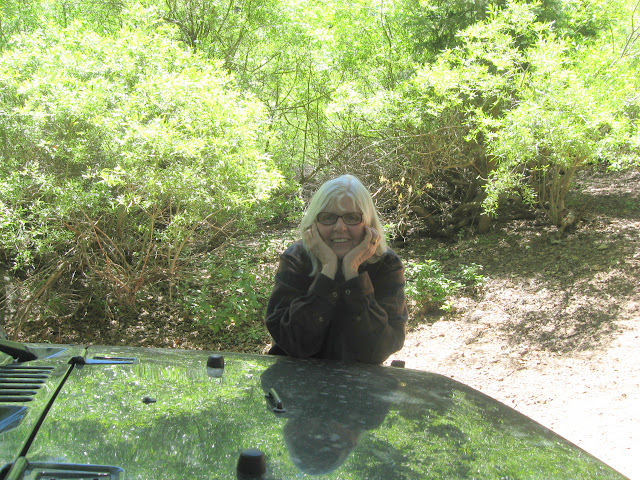 Look, the Wrangler is spotless, like a mirror! This is impossible since our dirt roads are so dusty now, but there it is. This could be my Saint Patrick's Day picture, don't you think? 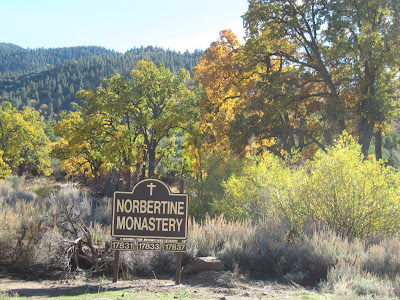 After lunch, we wanted to visit the Norbertine Monastery, located just below the park. The nuns' driveway is incredibly steep and once we reached the top, there was no parking. So we turned around and spent some time in the lovely fields below. The above picture is from the fall of 2010 when my friend Judy and I visited the monastery. 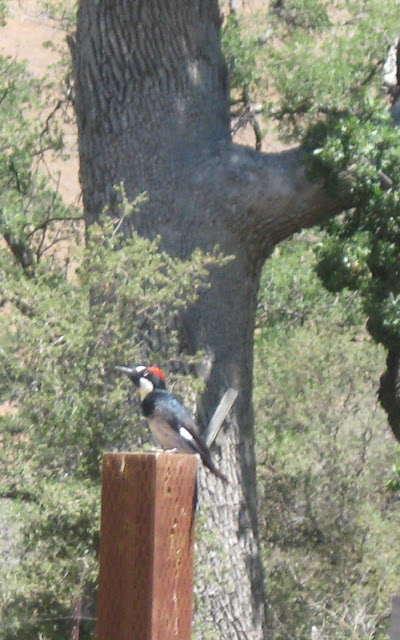 There were hundreds of woodpeckers, noisily working away in the tall trees. This may be an Acorn Woodpecker, he and his flock were lined up on the fence posts at the monastery, like sentinels. Probably they were after acorns dropped by the many ancient oaks that grow in fields and on hillsides around the monastery. The nuns could not have selected a more peaceful place for contemplation and prayer. 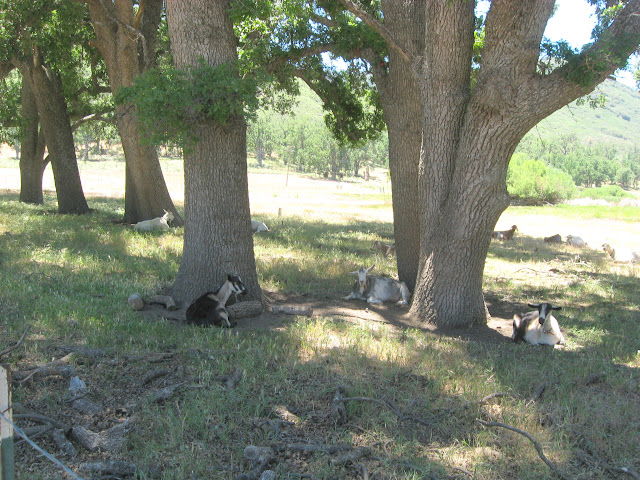 So instead of visiting the chapel, we spent some time with the nuns' mellow goats. 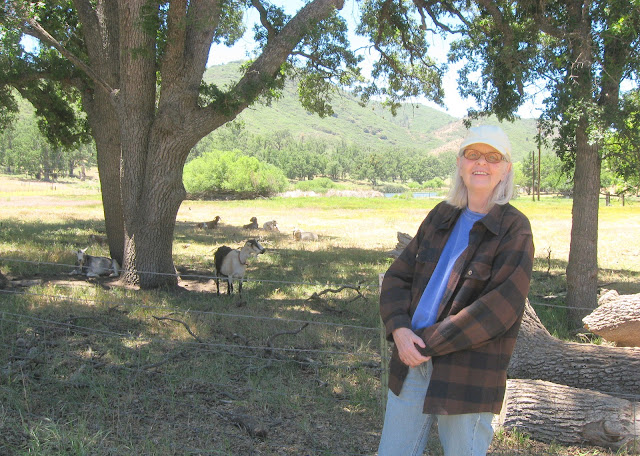 When I worked at the donkey rescue, the highway patrol stopped some Mexicans and after checking them out, the cops heard some strange noises from the trunk of the car. They found, I think, five grown goats inside. A couple of them died and the rest went to jail. The donkey rescue took in two. Rachael and I named them Julio and Eduardo and I fell in love with GOATS. I had never known any before then. Oh, were they wonderful ~ every day I stopped by their enclosure   for a chat, while they tried to distract me so they could nibble on my hat or camera or whatever I had in my hands.  They are in Texas now, I hope they are OK. I miss them. 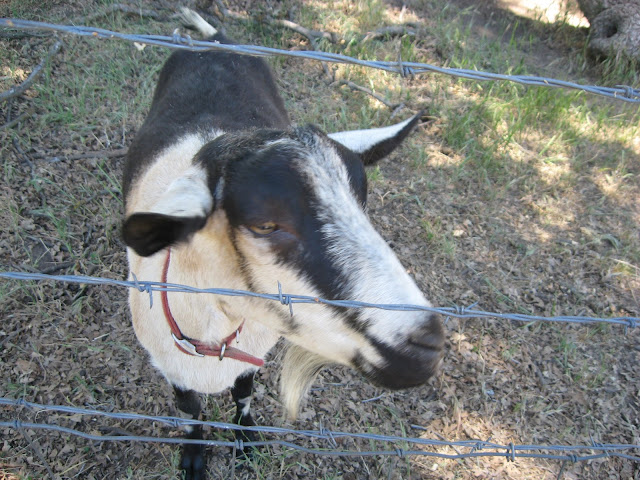 There were many, many goats resting in this field, but this was the only one to come up and say hello. 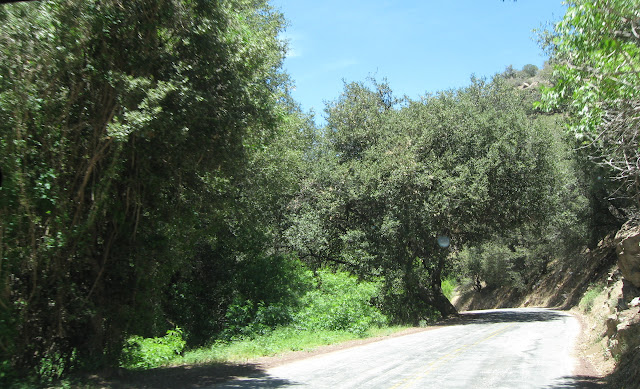 Driving back down the mountain, we were fascinated by green grass, green bushes, and green trees. I don't think I ever appreciated the color green as much as on that day. 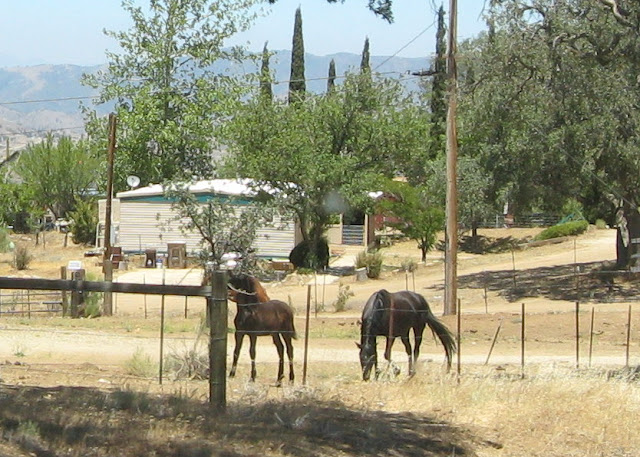 At the end of the mountain road, there were two horses and a foal. Of course the foal decided to turn his rear end to me as I snapped. 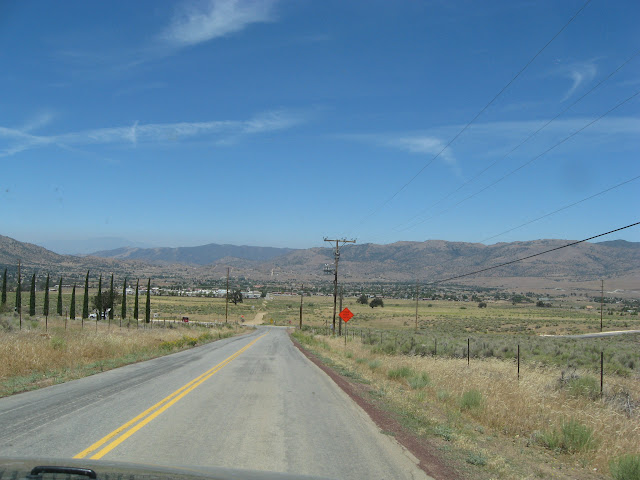 After that, we drove around the wide open ranch country to the west of our canyon and town. 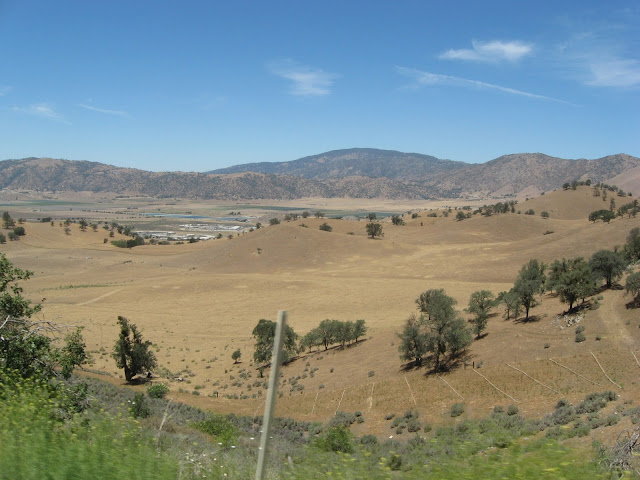 Then we drove on this one road, high, high above a valley with no guard rails. Since my blogger friend Feral Woman complained about the lack of guard rails here in California, I have paid it some attention. I think I was too nervous to take a picture of the worst of it, but this one may give you an idea if you take note of how tiny those oaks look down below.

Safely back in town, we stopped by the store and bought a carrot cake and some ice cream to continue the birthday celebrations at home. A great birthday, my 73rd!