A Place Of Overwhelming Beauty


Visiting the Antelope Valley Poppy Reserve in a superbloom year was fantastic experience. Nature has always sustained me and I delight in the smallest flower and the grandest mountain, but seeing the poppies this year will be added to my truly memorable nature experiences: Seeing the Aurora Borealis as a child in Sweden; standing silent one night, watching millions upon millions of stars in the skies above a Texas prairie; sitting on a Wyoming mountain, watching Big Horn sheep butt horns during the rutting season; and a few other such magical moments. 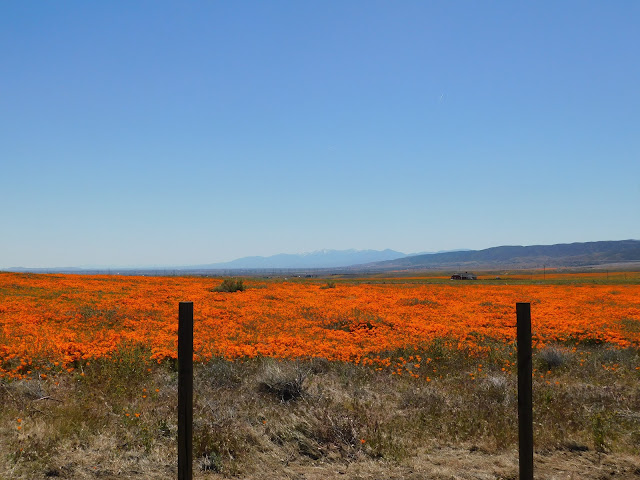 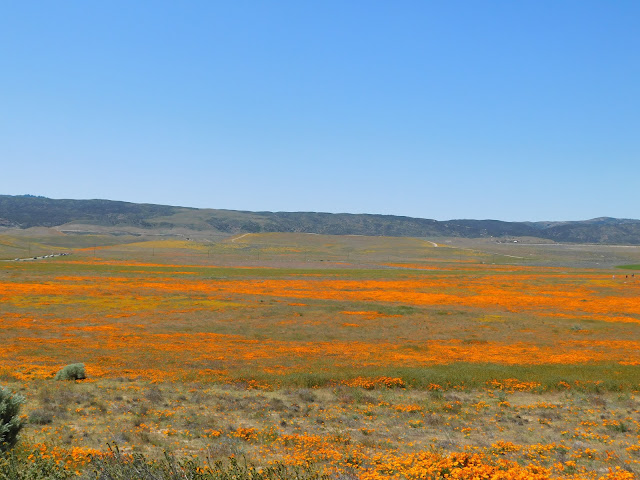 A long line of cars drove slowly up the road to the entrance. It didn't matter that we had to stop many times, there was so much beauty all around. 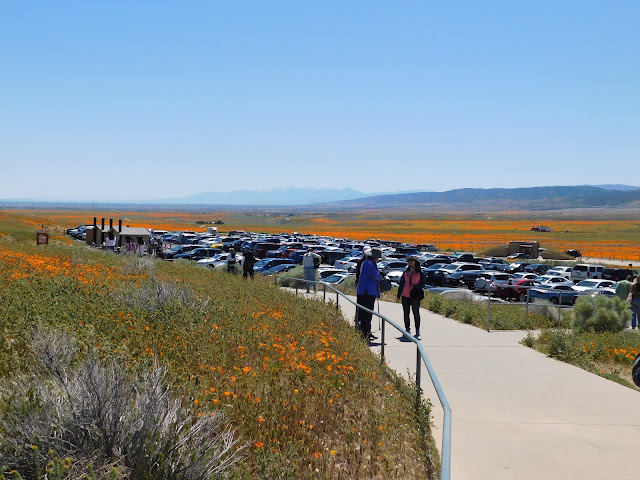 One of the parking lots at this 1800 acre reserve, as you can see, it was full. I can only imagine what happens on a weekend. 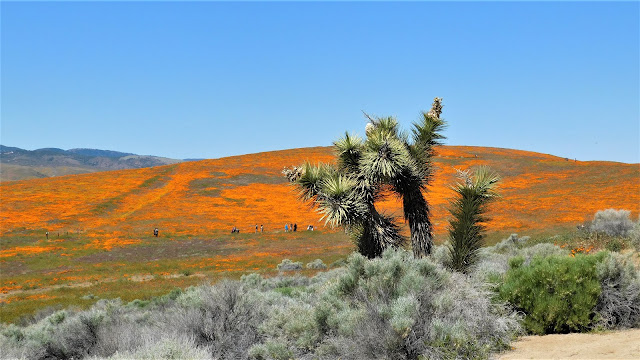 In the 1700s, poppies covered field upon field from the California coast to the inland deserts. Quoting the brochure I received, the Spanish named the flower La Sabanilla de San Pasqual (The Altar-cloth of St. Pascal) referring to the shepherd saint, who knelt among wildflowers to pray while far from his village and church. I also learned that the most spectacular fields of poppies grew at Rancho San Pasqual, now known as the cities of Pasadena, Altadena, and Sierra Madre. 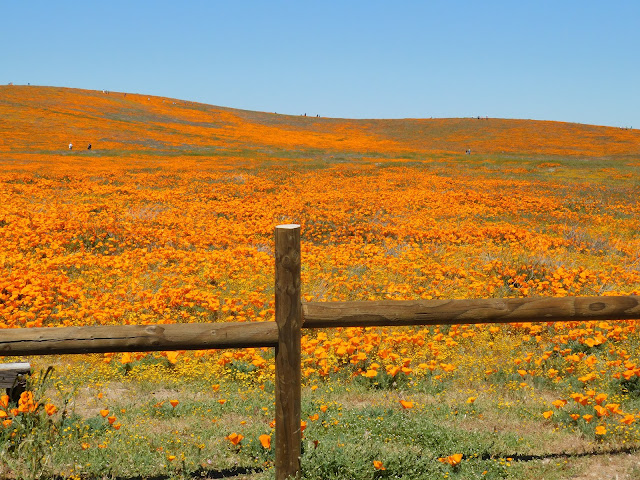 The California Poppy was named the State Flower in 1903. At that time, large fields of poppies were found throughout the state. While poppies still grow in many areas, including here in our canyon, the only large fields left where poppies bloom consistently each year are here in the Antelope Valley. 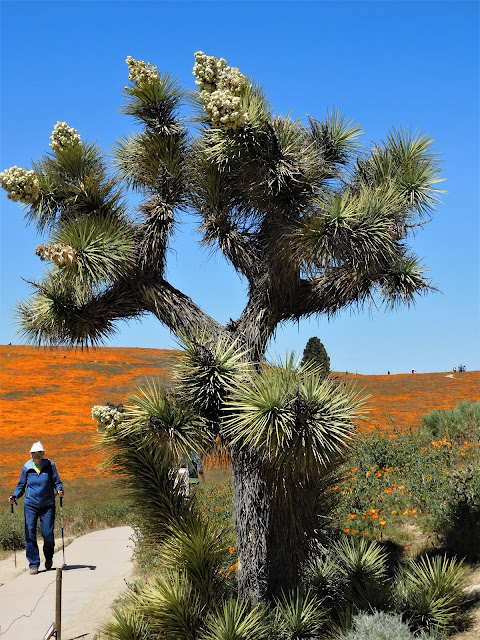 That was some background. The rest will be what I saw and felt at this beautiful place. And what better way to begin than with another old-timer making her way past a magnificent Joshua tree in bloom. 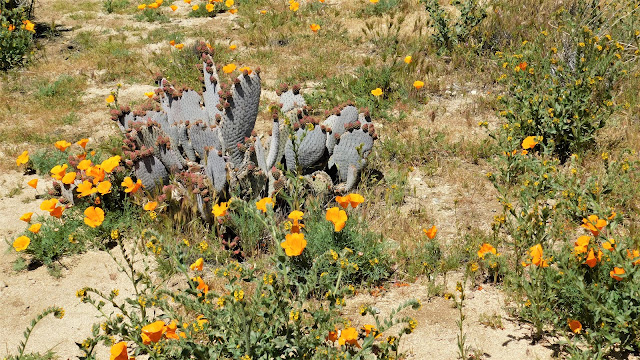 The place is so large that people spread out and it doesn't feel crowded. I noticed many seniors walking with canes, poles, and other kinds of walking sticks. Some in wheelchairs also. 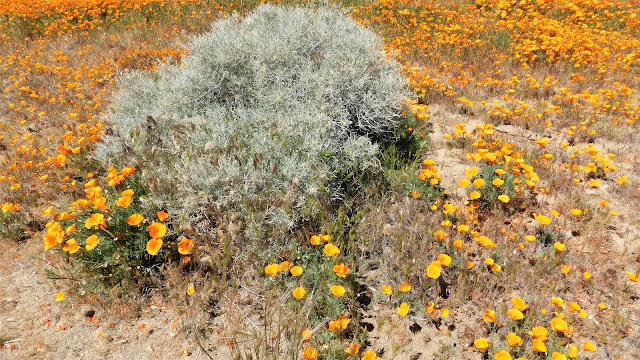 I took lots of pictures, of course. Here, we came upon some baby poppies. I don't remember ever seeing any so tiny. 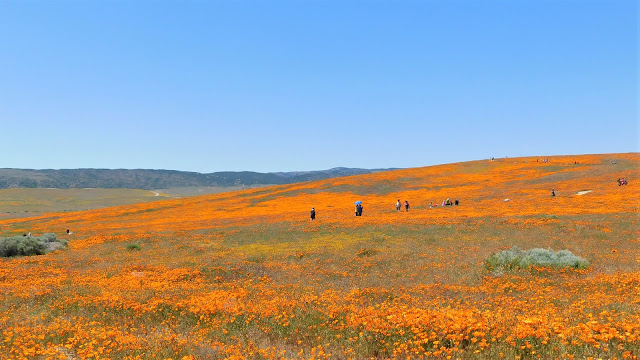 Then Jeanne pointed out this woman, walking uphill under a bright electric blue umbrella. The wind was blowing by now, and the umbrella went this way and that. I think this was the best shot I got, but now, so far away. 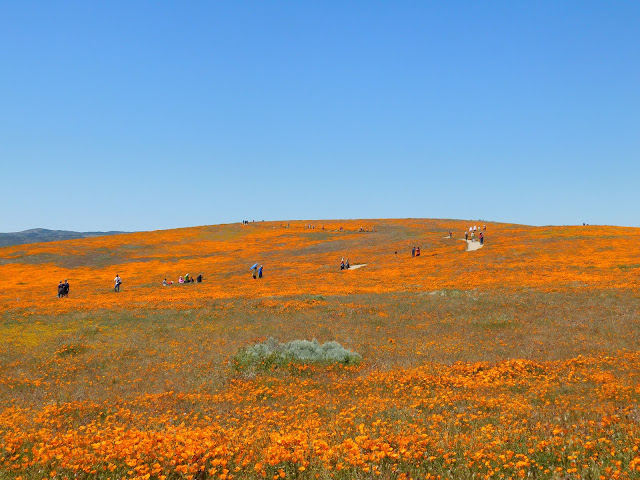 Here the poppies were a deep orange, in the picture below they are more on the yellow spectrum. As you can see, the path is not really crowded. It was the same all around, as far as I could see. 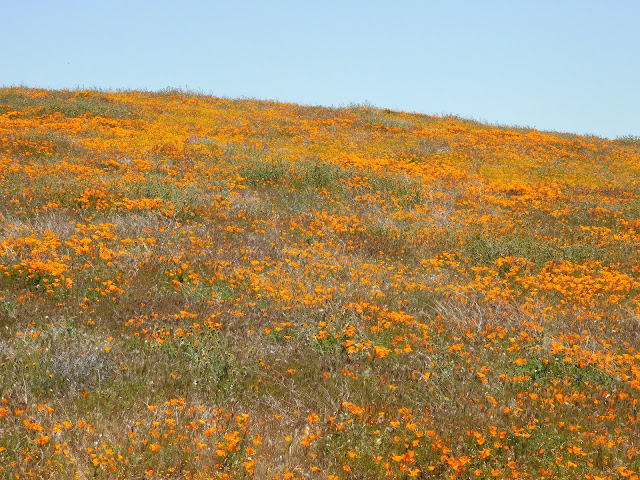 We walked up a hill, and I was happy to spot a bench as we arrived at the top. 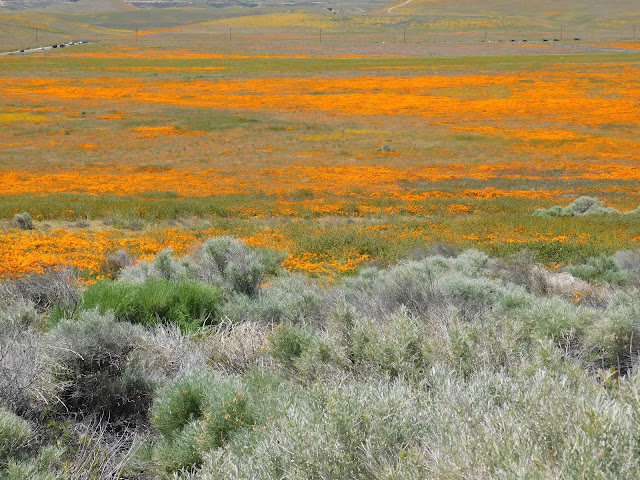 I will end here and post what we saw as we reached the top of the hill sometime next week. The views were gorgeous, hint: see my header photo.

I'm once again going to Joyce's house for Easter Sunday. She feels I'm part of her family and so do I. I love her parents, her daughter and Cameron. This Easter, I will meet some of the rest of her family. She has both sisters and brothers, so I'm looking forward to that.

This morning, I helped her untangle her gorgeous white llama from some barbed wire he got stuck in his tail and around his hind legs. My job was to distract Studley, as he is known, and I did such a good job, I got llama kisses all over my face. I later figured out he liked the taste of my sunscreen!

Oh, well, life in the country.

P.S. I learned from Jeanne that the flowers, that grow all over our hills here, are called Purplemat. The others, the lavender ones that can hurt you, the ones that people don't like, are called Red Stem Filaree or just plain Filaree. Thanks also to Sandy who pointed this out in a comment. At my advanced age, there's still so much to learn.