On a beautiful Sunday in Southern California, Rachael, Sydney and some of her other critters went with her friend Sylvia to Malibu. They were all going to participate in The Wild Brunch annual fundraiser for the The California Wildlife Center The center is a non-profit organization for native wild animals.
The event paid special honors to John Paul DeJoria and Bob Barker for their contributions to animals.

Rachael runs her own animal education program, called Sydney's Legacy, named after her bearded dragon, Sydney. She is also working toward having her own non-profit animal sanctuary. Sydney, who is a senior citizen with a lot of spunk, is pictured below with Rachael. You can read all about Sydney's Legacy on Rachael's web site, It's All About The Animals

These are some of Sydney's thoughts on the event: 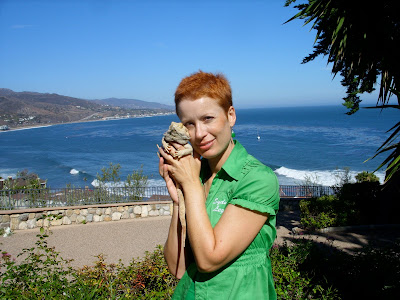 I was glad to get out of the house on such a beautiful day. 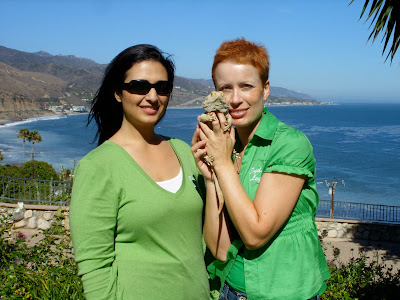 When I found out I was going to be held by Sylvia for most of the event, of course I was a happy boy. I may be a senior, but I can still appreciate beauty, well, you know…..That's Sylvia on the left. 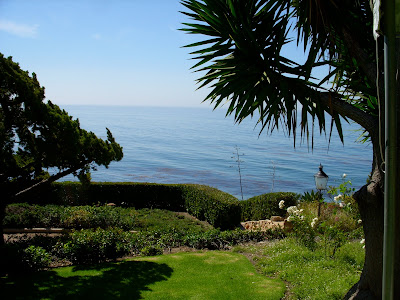 The event was held at Dick Clark's mansion, called Gull's Way Estate, in Malibu. It was a very nice place with fabulous ocean views as you can see here. 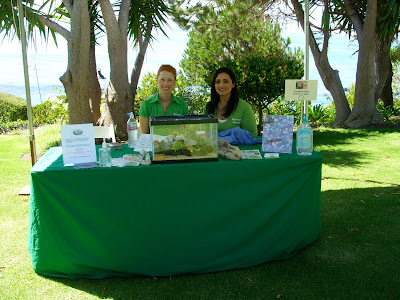 We soon set up our table in the kid's area. Sylvia and Rachael were happy because we were next to the Firemen (go figure). I personally thought we lucked out because we had the best views of the ocean. I was a little worried about the name Gulls, but Sylvia reassured me that gulls only eat fish, not lizards like me. Phew, that was good to know. Now I could relax and watch Rachael in action. 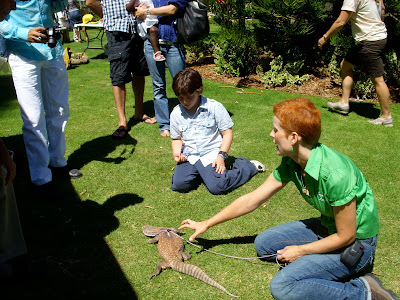 Here she is telling people about Shackleton, her Savannah monitor lizard. I have known Shackleton since she was no bigger than a tiny frog in Rachael's hand. Rachael thought she was a boy so now she is named after a man, a famous explorer. I guess she's stuck with her name now. 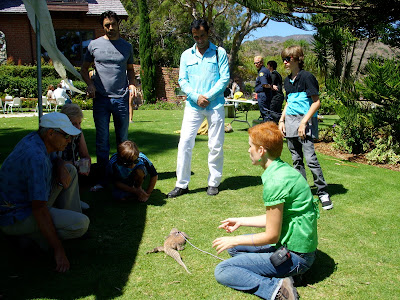 Look how big she's gotten. Rachael likes to name her animals after famous people or places so she can talk to kids about those things too when she teaches them about animals. A very good idea, I think. I, myself, am named after the big city in Australia, because my species come from there. 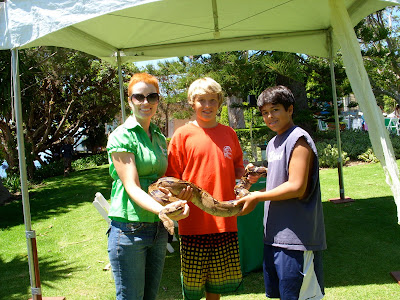 Nightingale, Rachael's red-tailed boa was a big hit with the kids. 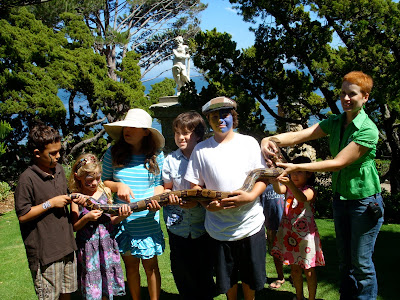 They all got together to hold her and she got quite long as they stretched her out. 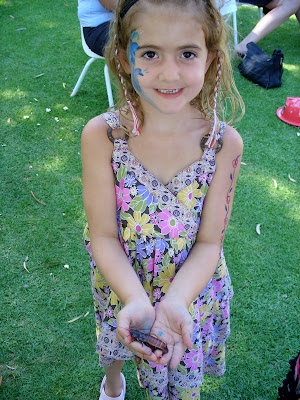 The kids had all kinds of paint on their faces and arms – I guess that's a fun thing for a kid. These little girls were very brave, as far as I'm concerned, holding the Madagascar hissing cockroaches. 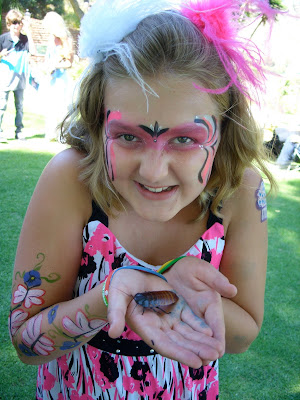 I don't like cockroaches much myself, but the girls seemed to have fun with them. I know this girl felt very brave. Just look at her face! 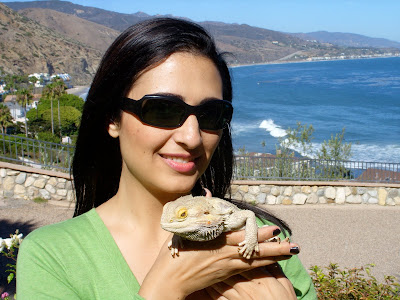 If I may say so, I was a big hit myself! A lot of kids came up to see me and they petted me and took lots of pictures with me. I got petted a whole lot that day, but it was all for the good of the native wild animals, so I put up with it. Rachael said that even people who were afraid of reptiles liked to pet me because I'm not as scary as the snakes. You can say that again! But I might have put my claws too much into poor Sylvia when I got a bit overwhelmed. I hope you forgive me, Sylvia; it's not easy for us senior bearded dragons to meet so many kids all at once. Can be a bit scary for us.
But I also attracted some grownups to our table. One was Gilles Marini, the actor, who was an Honorary Committee Member and I think has his own bearded dragon at home. He was very interested in beardie care and was picking Rachael's brain for a long time. I was happy to help bring such a nice and caring man to our table. He was smart too, because Rachael really knows her stuff when it comes to caring for us animals.

Rachael also brought Cleopatra, the ball python, Pocahontas, the California king snake, and all the Madagascar hissing cockroaches (they had babies, wouldn't you know).

I was very tired when the event was over, but I must say I really enjoyed the day. It was a beautiful place and it felt so good to be out there and be an educational animal. Some of the people in charge even told Rachael that I was the Star of the Show! Imagine that! It made me a very proud old beardie -- I almost got all puffed up. But this is the best thing about living with Rachael: Not only do we get the best of care and lots of love, we also get to be educational animals that teach people and kids what all animals need and what you're supposed to know before you even get any kind of pet. 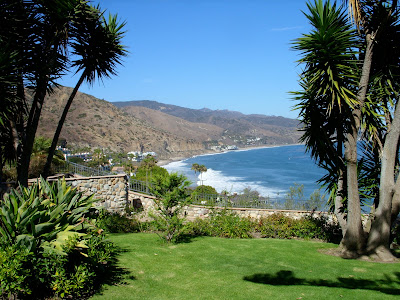 Rachael said the organizers told her that all of us from Sydney's Legacy were a big success. And, yes, I have to repeat: that you know who was the Star of the Show! I know Rachael was happy that we helped her and some more people found out about Sydney's Legacy and all us educational animals.

All in all a great day. I was a very tired senior beardie and slept for a long time once we got home.

Posted by Sydney, the bearded dragon of Sydney's Legacy.
Posted by Inger at 12:13 PM