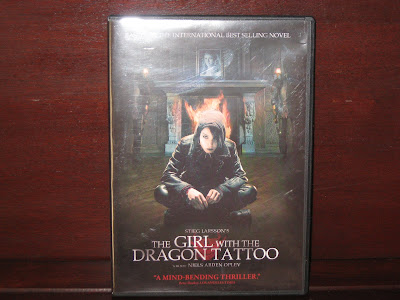 This week it's not a book, but a film on DVD, based on the book The Girl With The Dragon Tattoo, the first book in the Millennium Trilogy by Swedish author Stieg Larsson. I have been asked how I liked the film by several people, so I'll give it a try here.

I'm sure most people in the world are by now familiar with the Millennium Trilogy. I wrote a blog post about the heroine, Lisbeth Salander, in February. I called the post -- The Girl Who Made The Pages Sparkle -- because that's what Lisbeth did for me. Here is some of what I wrote:


These well-written and interesting books cover a wide range of subjects from crimes against women, Nazis and neo-Nazis in Sweden, financial crimes, the Internet, the Swedish Secret Police, running a crusading magazine, and much, much more. But the books truly come alive once the Girl of the titles, Lisbeth Salander, the most fascinating heroine to ever appear in any crime fiction I've ever read, makes her entry on a page.
Lisbeth is an astonishing heroine for our times, totally outside any middle class box and endowed with gifts that will make your jaw drop. She comes from a terrible and dysfunctional family, she spent time in a mental institution, she has many tattoos, a photographic memory, is a computer genius who can hack into any computer anywhere, dresses Goth, rides a motorbike, and well, you get the picture: there is nothing middle class about Lisbeth Salander.
While I didn't like the first book as much as the other two, I have the DVD here and I like it a lot. I think it is a very well made film, the casting is impeccable, not just of Lisbeth Salander, but of Mikael Blomkvist and all the other characters. The Swedish winter landscape is as stark and beautiful as it is in real life. A few more view shots of Stockholm, my beautiful hometown, would not have hurt. But then you can't have everything.

In Swedish, the film is called Men Who Hate Women and the crimes against women are horrendous and you see a lot of them. Many of the crimes happened a long time ago, but photos are available and people's imaginations are also used to depict what the women's mutilated bodies looked like when they were found. There is an exceptionally brutal rape and also women being held hostage that take place in real time. You get the feeling that the author had a point he really wanted to drive home, in case we were so complacent that we didn't think crimes like these happen.

While the film follows the outline of the book pretty closely, of course they have to omit a lot and change a few things. It seemed to me that the time spent in northern Sweden was shorter and more interesting than in the book, something I liked. The same goes for Australia. And the ending in northern Sweden is very intense as it becomes clear who committed some of the crimes. It is very, very well done, very intense, very scary and in the end some sort of justice is served.

I have to share one laugh I had at myself and at how Americanized I have become. There was a scene where Lisbeth drops some papers off to Mikael while he is in prison. Well, I saw this nice place, a lot of light, pretty IKEA-style Swedish furniture, potted plants -- I'm sure, though I don't remember, and I had no idea where he was. So accustomed have I become to the we-will-scare-you-straight kind of prisons depicted in American movies. It really took me a while to figure out he was in prison, the Swedish version of a low security prison. You have to see the film to find out why he was there.

This is a very good film and, as it has made its way across the world, it has become the highest grossing film ever made in Sweden.

I got an email from amazon.com the other day that thrilled me no end. It said the DVD of the second book, The Girl Who Played With Fire, is available to pre-order and will be released for sale on October 25, 2010. That was my favorite book of the three, so I can't wait!!
Posted by Inger at 9:43 AM