Welcome Kent Island Red, Deborah, Joe and Farmchick and thank you so much for signing up to follow my blog.
NB: I'm having problems uploading the old edited pictures from my computer, so I had to use unedited versions. I have to connect my scanner too. Anyway, that's why the quality is so bad, the original photos are great. Very clear after all these years.
I love this photo of my father's family on an outing, circa 1914. These old photos and my grandfather's world history book will be the treasures for today. My father is in the bow of the boat and my grandfather is second from right. 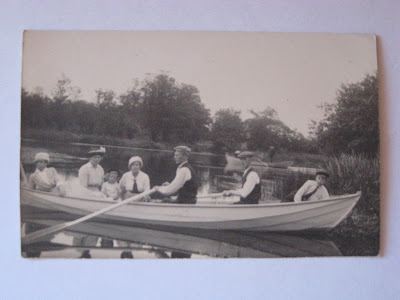 My grandfather lived to be almost 90. He was probably the kindest, sweetest man I have ever known. Interestingly and sort of sadly, he was married to my grandmother, she of the dimpled chin, or as Louise said in an earlier comment: "Dimple in chin, devil within." I believe my grandmother was a good woman, but she had to take care of a slew of younger siblings when her own mother died young, so she developed a very domineering personality that affected her sons and daughter-in-laws, perhaps more than my grandfather. He just tuned her out, I believe. 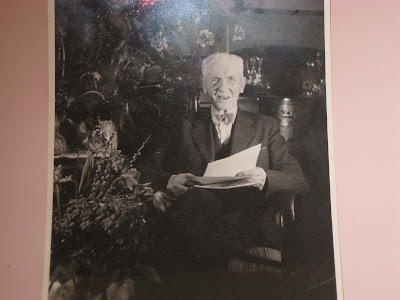 This is my grandfather later in life, celebrating one of his many big birthdays.
My grandfather's world history book is very thin, indeed. Only 62 pages survive and I don't think there were many more when it was new. It is a world history book for maybe junior high school equivalent back then.
Published in 1884, my grandfather wrote his name, the level of his class, and the year 1892 on the inside of the cover. My grandfather was then 14 years old.  I looked through it just now and it covers a lot, but very briefly. 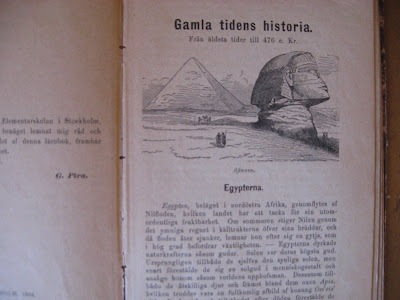 It begins with the Egyptians. And continues with the Greeks, their country, religion, some Greeks of prominence and some major battles. 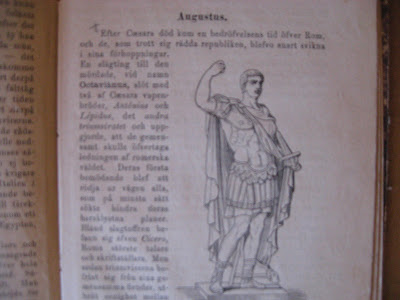 Then on to the Romans. This is the Emperor Augustus. In a few short paragraphs, it covers Romulus and the founding of Rome; Hannibal and the march across the Alps; many battles, and then moves on to Julius Caesar, Augustus and Constantine.
The book explains how the religion of Islam was born. And the importance of the city of Mecca. It covers the crusades, Wilhelm Tell, Joan of Arc, Gutenberg, Columbus and others.

And someone important to religion in Sweden, Martin Luther. The Lutheran Church used to be the State Church of Sweden, supported by taxes. A foreign concept to my fellow Americans, I know. That support has ended, I learned when I was there last. 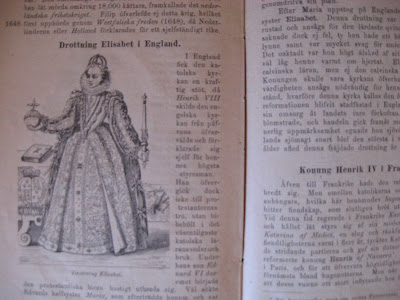 Queen Elizabeth of England. No need for the number I after her name as her namesake, Elizabeth the II, had not yet been born. Not much was said about England. There was a drawing of Louis XIV of France. But not much said about France either. There is a short paragraph about Peter the Great of Russia and somewhat more about Fredrik II of Prussia. 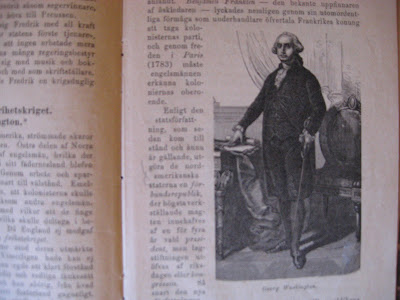 About one page of text and a drawing of George Washington. The text covers the war of independence from the British. 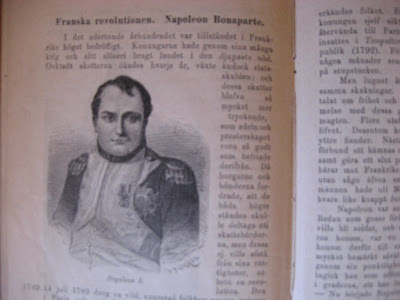 The final drawing in the book is of this guy, Napoleon Bonaparte. He actually gets one more page than George Washington, but then we are in Europe where Napoleon was a very busy man, so that's understandable. The book ends with the Russian-Turkish war of 1877-78, a war I have forgotten about, if I ever even knew about it.
When my grandfather was in his 80s, he was interviewed by the largest Stockholm newspaper and gave a marvelous interview about the old days and how it was growing up in Stockholm then. It's interesting that both my paternal grandparents were actually born and grew up in Stockholm. At that time it was still a small town with the influx of people from the countryside coming later, in the 20th century.

In 1892, the young people of my grandfather's generation were literally standing on the threshold, not only of a new century, but of a whole new world and a whole new way of life. My grandfather was born in 1878 and lived through so many changes, so many inventions, and so many discoveries that it boggles the mind. Imagine living from 1878 to 1967 through everything that happened: Electricity, radio, cars, movies, airplanes, space travel, telephones, TV, two world wars, the atomic bomb, all the medical discoveries, and so much more. I'm thinking indoor plumbing and the invention of the W.C., as it was called, the indoor toilet, was perhaps most significant to the common man. I don't know if any other generation ever did, or ever will, experience as much basic change as my grandfather's. 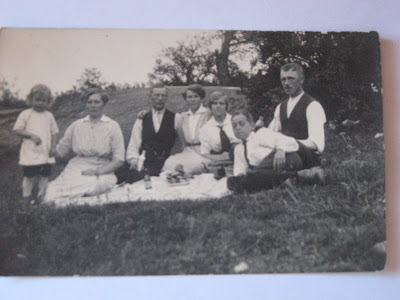 Here the boaters have embarked for a picnic. My grandfather is behind my dad to the right; my grandmother is to the left with my uncle, a cute baby, who grew up to be a very handsome man. And, as an aside, neither he nor my dad inherited the dimple in the chin from my grandmother. I, on the other hand, got my Swedish nose from my grandfather. Not the prettiest thing in the world, but I'm proud of it.

And I will never forget what a kind and thoughtful human being my grandfather was.
Posted by Inger at 8:46 AM