P is for Pippi Birdie Parakeet

My theme for the A to Z Challenge: Desert Canyon Living
This is the story of two parakeets, one an escape artist that came to a tragic end; the other a more laid-back bird that is still with us. His name is Pippi Birdie. Pippi means Birdie in Swedish.
One evening in the year 2000, my husband called me to come outside as the entered the gate to our yard. I saw something green flutter in his hand. Sure enough, it was a parakeet, a barely alive parakeet. He saw it in the street and stopped to pick it up. I have never been one for birds in cages, but what do you do when faced with a rescue attempt? Of course you do all you can to save a life, no matter how small. We took the bird out to the office to keep it away from our cats and dogs, then we cleaned out the cat carrier for a temporary home, we gave the bird some bread crumbs and water and left it alone to rest over night. It was still alive the following morning, so we got everything she needed, a cage, food, and so on. I even bought a book about keeping parakeets since I knew nothing about birds. We named her Tweetie Bird, so original, I know.
One thing we learned was that they do like company. So we got a companion for her, Pippi Birdie. They didn't get along really well, but they were together for several years, until one day, when I was cleaning a new cage we got for them, she somehow got out. Our dog Bandit ran after her as she flew across the living room with me in pursuit of them both. Unfortunately, she flew too low and he got her. It was horrible, she died and I buried her in our back yard, feeling very guilty for being careless and letting her out. 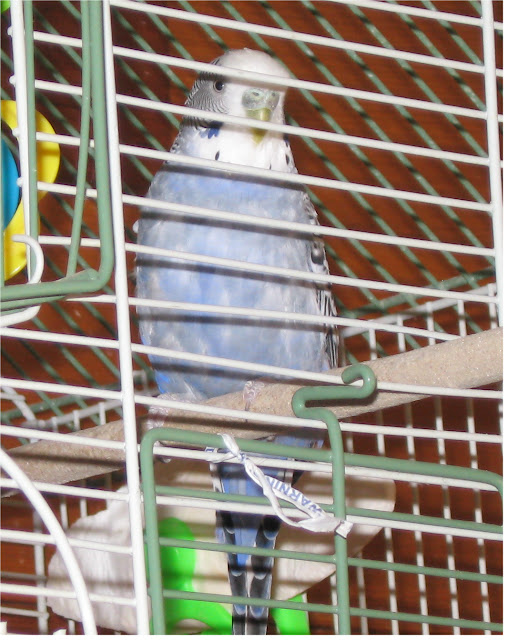 It became clear very soon that Pippi Birdie didn't mind. He was happy to have his cage to himself, with no one hogging the food or pecking on him like Tweetie used to do. Watching him play with his mirror, we bought him some more and now he has three that he constantly interacts with. Observing him for a while, we  decided not to get a companion bird for him. It might not work out and he clearly didn't mind being alone. 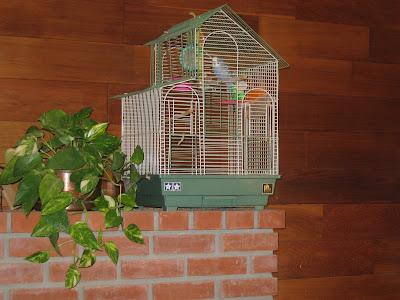 I still don't like the idea of a bird in a cage, but he seems content. He is particularly happy in spring when there is a lot of bird activity and twittering going on outside. He sings along with the outside birds. He also loves music and TV and twitters along with those media. He used to sit up high, away from the fray, on the fireplace mantle, but since my accident last spring he lives on a side table in a corner, next to the couch. If I get some more range of motion back in my injured arm, he will return to his fireplace perch. 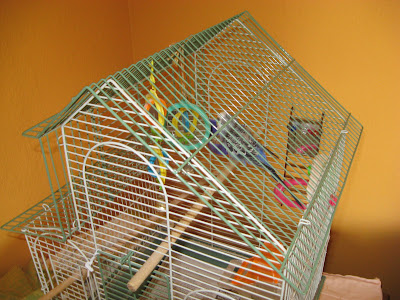 He doesn't seem to mind sitting on the table. I know that Samson has messed with him a few times, but this is a tough and calm bird who doesn't scare easily. One day, I caught my husband vacuuming his cage and yelled out that these birds can die of fright. Well, Pippi Birdie survived that ordeal and he survived Samson. I enjoy sitting on the couch and watching him play with his mirrors and other toys in his cage. So he may stay on that table for a while yet. No, he doesn't speak English -- if he did, I would love to have him tell me who occasionally poops on the living room floor while we are in town.
He is eleven years old now and is a very sweet and much loved member of our family.
Posted by Inger at 6:52 AM