R is for Roots ~ The Family Kind

Looking back on my life, there are days that are so special, so memorable, I smile every time I think of them. In Sweden in 2001, I experienced an unforgettable day where I met an old couple I will never forget and found the place where my great-grandparents lived. It was especially touching because my mother and I had often sat at our kitchen table and talked about her dad and her grandparents, who came from a village in south-western Sweden, called Mardaklev. I never knew my maternal grandparents and my mother never knew her dad's parents. She wanted to visit this place where her ancestors lived, but she never did. And now I was about to.
My cousin, Arne, lives in a small town in western Sweden and in 2001 I visited him there. Since it was April, the cranes had gathered for their annual visit to Hornberga lake, right around the corner from where my cousin lives, so we went there and watched as thousands of cranes gathered, danced, and flew overhead. Another unforgettable experience. Impossible to get pictures of the cranes with the camera I had at the time.  No snow when I visited, this is a postcard.
The next day we set out for Mardaklev, a small village in the province of Halland. Another cousin of ours had found out about an old couple there, who probably would know something about our great-grandparents. After couple of hours drive, we arrived in Mardaklev and stopped at the pretty wooden church, took some pictures, and walked around the graveyard where our great-grandparents are buried. 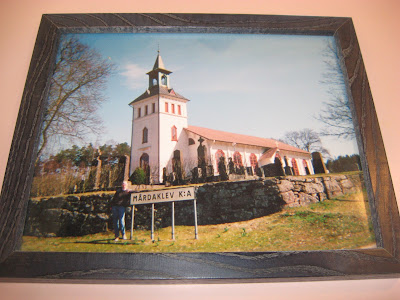 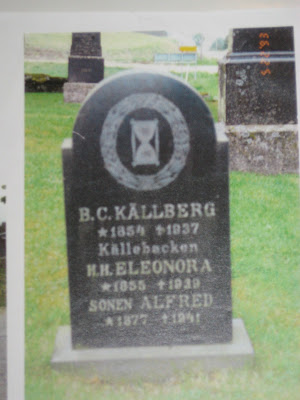 My great-grandparents' grave.
Then we asked for directions and found the couple's house. A pretty yellow house with a cat sleeping on the porch bench. 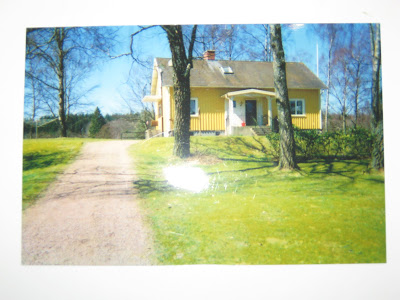 The river was on the other side of the house, down a hill.
Now imagine this: It is Sunday, around noon. My cousin and I, dressed in jeans and casual clothes, go up to this yellow house, knock on the door, and tell the very old lady who opens who we are and that we are looking for our roots. 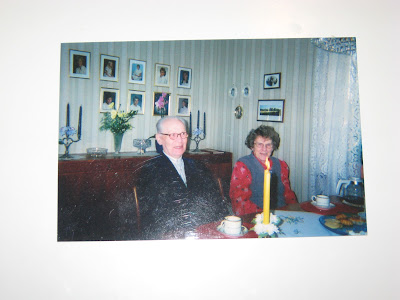 Ivar and Gunhild treating us to coffee and cake
Once she understood who we were, sort of, she invited us in. She told us that she and her husband had just finished listening to the Sunday service on the radio, being too old to go to church. But they were dressed for church, their home was immaculate, there were flowers in vases, candles on the table and family pictures on the wall.

Their names were Ivar and Gunhild Carlsson, both in their 90s. Coffee, cakes, and home-baked cookies soon appeared on the table. Ivar became very excited once he figured out who we were and told us that we were even remotely related to him. Ivar had a church/county registry that he pulled out from his bookcase and showed us our common ancestor and a lot of family history. 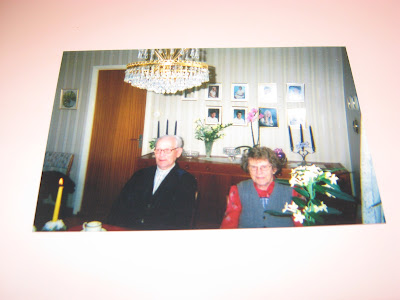 It also turns out that they both knew our great-grandparents and had stories to tell about them. Apparently our great-grandparents were a hard working couple with nine children who were very well liked in the community. Our great- grandfather, Bengt Kallberg, was a master at making things grow and earned a medal from the Patriotic Society and many accolades for his gardens. I could have stayed all day, but after exchanging addresses, we set our for the deep forest to try to find our great-grandparents' place. Gunhild kept in touch with me until she died of cancer a few years later. Ivar went into assisted living then and probably passed on soon after. 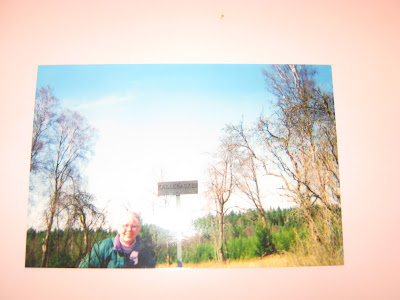 By the Kallebacken sign.
We drove into the forest on a dirt road, surrounded by fir trees that smelled like Christmas. And for me this whole day was a very Christmasy day. After a while we came to a pretty good-sized clearing and there was a sign, Kallebacken. Their place, the place my mother so had wanted to visit. 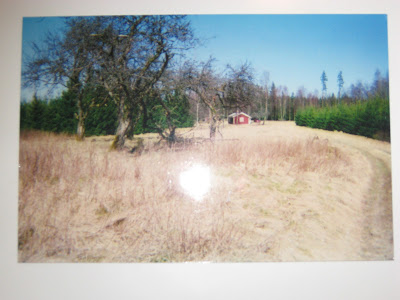 A small cottage stood at the far end of the field. 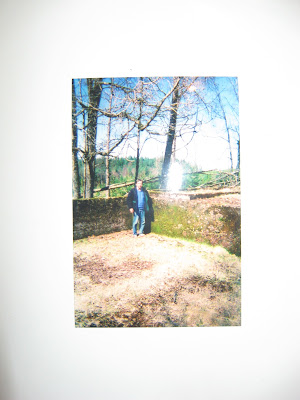 All that remained of the main house, were some foundation walls. 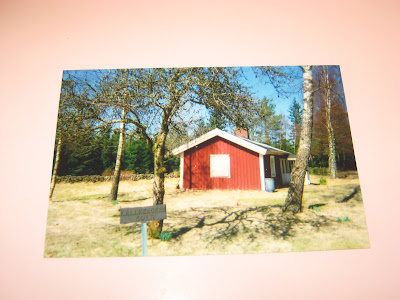 The place was so peaceful, the air smelled of fir trees, April birds, dizzy with spring fever, sang in the bushes. I thought of my mom and was glad we had found this place she and I talked about so often at our kitchen table.